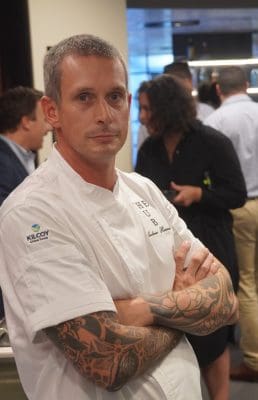 Operating from Kilcoy’s sparkling new commercial test kitchen located near Caloundra on Queensland’s Sunshine Coast, Andy (pictured) has become something of a social media sensation, produced a suite of inspiring and motivating video clips encouraging young chefs and keen home cooks to push the boundaries in how they select, prepare and cook red meat cuts.

Andy worked at a number of Melbourne restaurant institutions, including Entrecôte in Melbourne’s CBD and Gill’s Diner. Earlier, the New Zealand native also completed a six-year stint in England working across some of London’s trendiest restaurants in Notting Hill and Shoreditch.

While Kilcoy’s own high quality beef brands are clearly evident in some of the videos, the content is far from brand-specific, and is designed simply to celebrate quality meat in general. Some of his videos have had more than two million views. How has he done it?

Here’s his recent video on using the reverse-sear technique on a tomahawk steak, which has logged around 1.7 million views: