Prior to his retirement Richard was the head of Sanger Australia, one of the nation’s largest non-packer exporters. 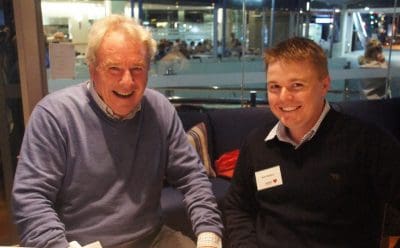 Bede McAlpin gets to know his partnering mentor, Richard Rains, during a Graeme Acton Connections Program gathering in Brisbane earlier.

He is widely credited for convincing global burger giant McDonald’s US to shift its grinding beef policy from domestic only, to also including imported product from Australia. McDonald’s global has since become Australia’s single largest beef customer.

A passionate crusader for the red meat industry, Richard has strong views on wide ranging topics including fake meat, the greater need for branding to lift Australian beef out of the commodity space, and how the industry should respond to attacks from animal activists and environmentalists over its sustainability performance.

Another of his passions is developing and mentoring young people coming through the industry. A number of senior meat traders currently working across the beef industry can attest to that, having learned the trade under Richard’s tutelage as greenhorn young traders at Sanger. One of his current passions is the Platinum Primary Producers’ Zanda McDonald award for young industry personnel, and the Graeme Acton Beef Connections mentoring program, connected with Beef Australia.