Taking over the reins recently as manager at Smithfield Cattle Co’s expanded Sapphire feedlot near Goondiwindi was James Guest. 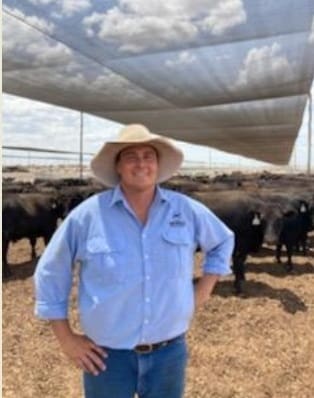 Sapphire has recently undergone a major expansion, growing out to 20,000 head capacity in several stags over the past 12 months – click here for Beef Central’s earlier story.

Mr Guest was previously operations manager at AA Co’s Aronui feedlot near Dalby, having originally entered the grainfed industry as a trainee manager with Stanbroke at the company’s Bottletree feedlot near Chinchilla in 2013. He then progressed to livestock manager at Bottletree for the next four years, before moving to AA Co to manager Aronui operations earlier this year.

Originally from Central NSW where his family ran a cattle backgrounding operation near Merriwa, Mr Guest completed a business degree at UNE Armidale, majoring in management and HR.

Currently tempering grain, Sapphire is sizing-up installation of steam-flakers sometime in the near future.

Talented red meat marketer Brad De Luca has left JBS Australia, where he has driven the development of a suite of high-profile red meat brands over the past seven years, to take up a new marketing role next year with Thomas Foods International. 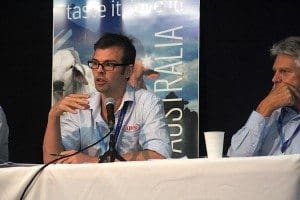 Brad de Luca participating in a marketing session at Beef 2018

While working at JBS, Mr De Luca was heavily involved in the concept and development of a number of the company’s large-scale demand-driven flagship brand programs including the Great Southern family of farm-assured grassfed brands for beef and lamb, Little Joe (super-premium marbling score 4 and better grassfed Angus), Thousand Guineas Shorthorn beef and others – all designed to maximize revenue and strengthen JBS’s supply chain linkages, and add value for customers.

Michael Finucan, who joined JBS last year from MLA, will take on some of the marketing responsibilities previously held by Bred De Luca. 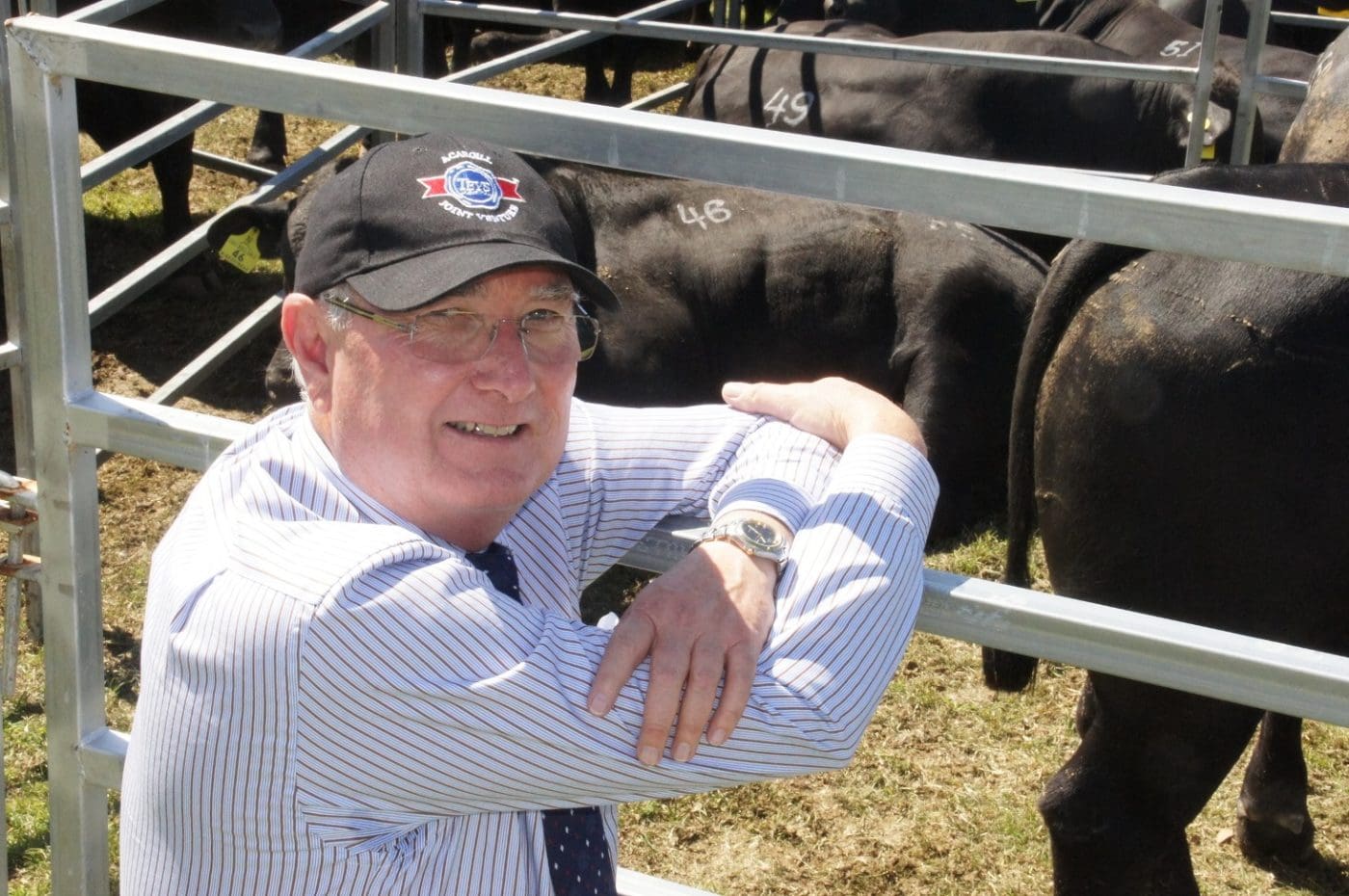 The general manager of livestock for family-owned and operated Teys Australia, Geoff Teys started work in the offal (petfood) room at the company’s Beenleigh plant, back on 20 November, 1970 – a full four years before the start of the Great Beef Slump in 1974. He worked his way through most other areas of the plant, breaking his teeth buying cattle out of Brisbane’s old Cannon Hill saleyards a year or two later. He remembers his first pay packet contained the princely sum of $23.80 – “and my mum took $10 for board,” he quipped.

Geoff remains active in the business on a daily basis supervising the company’s livestock buying team, putting together kills for Teys’ five Queensland, NSW and South Australian processing sites plus feedlots, and regularly buying cattle himself.

Daryle Belford from Whyalla feedlot near Texas, Qld, and Tom Green from Thomas Foods International’s Iranda Beef feedlot, SA will take up their board positions at the next council meeting, while Tony Fitzgerald, also from Whyalla, has stepped down from the board.

Mr Belford managed cattle properties in Central Queensland between 1990 and 2004 before moving into an agribusiness and financial advisory role based in Emerald up to 2009. He entered the feedlot industry in 2010 at Whyalla feedlot, having worked in numerous parts of the business up to his current position of assistant general manager. 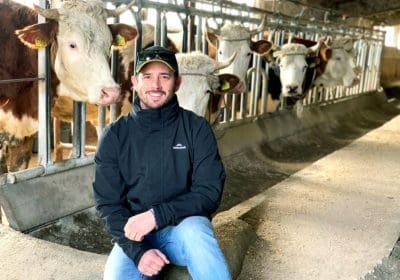 Tom Green worked in North America on large scale bull breeding properties before entering the feedlot industry in 2012, when he joined Teys Australia at Jindalee feedlot. He started as a graduate manager before becoming the yard’s livestock manager, and later still, operations manager. In 2016, he joined Thomas Foods International as operations manager at the expanded Iranda Beef yard, before being promoted to general management for TFI’s feedlot and farming operations in 2018.

Also during Friday’s AGM, ALFA president Bryce Camm was re-elected for his second year, Barb Madden was returned as Treasurer, and Grant Garey and Paul Vogt were re-elected vice presidents.

“Tony was elected to council in December 2011 and has been an active contributor to the success of ALFA. He held the position of vice president from 2017 to present and numerous committee chair positions including most recently the research & development committee,” Mr Camm said.

“On behalf of ALFA members and past and present councillors, our gratitude and appreciation goes out to Tony for his generous contribution,” Mr Camm said. 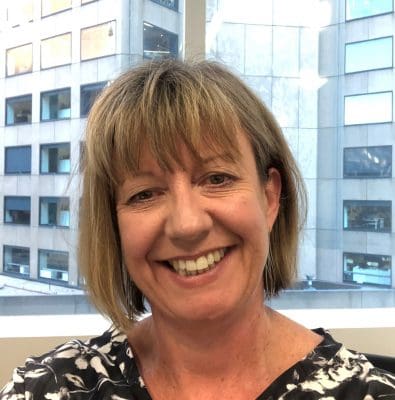 The Australian Fodder Industry Association (AFIA) has appointed experienced agricultural executive Paula Fitzgerald as its new chief executive officer. Ms Fitzgerald has a long history in the agriculture sector, starting with the CSIRO, working across many commodity sectors, with state and federal governments and has previously run a national organisation.

AFIA secretary and Western Australian hay grower Suzanne Woods said the appointment was good news for the fodder industry. “Paula will bring a new perspective to AFIA based on her broad experience across the agri-sector,” she said. “The board looks forward to Paula’s commencement and her leadership to build on AFIA’s strong reputation of working for its members and representing everyone along the hay, silage and straw supply chain.”

The award, sponsored by Performance Feeds, embodies passion, leadership, development and initiative and encourages emerging, dedicated employees to contribute their ideas and vision for lot feeding at a national level. Entrants are required to submit an essay on a real or perceived industry issue discussing its implications to the feedlot industry and explore a proposed solution to be successful in the award. They also must demonstrate their leadership potential through a defined set of criteria.

From 13 original entries, six progressed to the second judging round where they undertook a formal interview with the judging panel, followed by presenting to the ALFA Council on their essay topic.

This year’s three finalists are Kailen Hodgson, Teys Australia, Charlton Feedlot VIC; Louise Rush, Iranda Beef SA; and Molly Sage, JBS Australia, Beef City Qld. From here, the final three will be asked to further explore their industry topic and present their findings to a national feedlot audience during the formal proceedings of ALFA’s 50th Anniversary morning tea event on 18 December. The overall winner will be announced at the conclusion of the event. 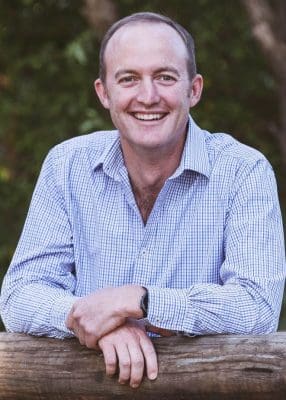 The appointment follows the gradual stepping-back of founder, David Bondfield.

Mr Heath has had a long association with the beef industry having worked on cattle stations in the NT and WA in the late 1990s and his family operating a sheep and cattle property west of Blackall in Queensland up until 2009.

His working career has included several commercial and leadership roles in the natural resources, investment management and agricultural industries. Most recently he was chief executive of Daybreak Cropping which built a 75,000ha portfolio of broadacre cropping farms across WA, Victoria, NSW, and Queensland.

“The Palgrove board is confident that Will is the right leader to build on our solid foundations and take us through the next growth phase for the business,” Palgrove chair, Leith Boully said in a statement.

For Palgrove’s bull clients, it is business as usual. Genetics manager Ben Noller remains the point of contact for seedstock enquiries. Palgrove has a big year planned for 2021 with a Female Sale scheduled for 12 March during Beef 2021 in Rockhampton on 2-8 May, Palgrove Hunter Valley Bull Sale in June and Annual Bull Sale in September.

“I am conscious that Palgrove has built a reputation based on delivering exceptional genetics and service to clients, and we are absolutely committed to continuing this in the future. I am looking forward to working with the Palgrove team to guide the business through its next phase,” Mr Heath said. “I believe the Australian Beef industry is well positioned to meet future consumer demands with our reputation for producing a high quality product in a sustainable manner which is one of the many reasons I am pleased to be back in the industry,” he said.

The Palgrove business operates a diversified portfolio of seven properties totalling 21,600ha across five regions from Emerald in Central Qld through to the Riverina in Southern NSW. Palgrove runs the nation’s largest registered herd of Charolais cattle and is also well known for its Ultrablack and Angus genetics, with seedstock herds numbering 3600 registered breeders.