A THIRD wet summer is on the forecast with the Bureau of Meteorology declaring the formation of the traditionally rain-bearing La Niña weather pattern in the Pacific Ocean.

In a statement released late yesterday afternoon, BOM said communities on the east coast of Australia should be prepared for above average rainfall. The relentless wet has been wreaking havoc across large parts of New South Wales and Southern Queensland – while many in the north are hopeful more rain will come this summer.

Bureau of Meteorology head of long-range forecasts Dr Andrew Watkins said the Bureau’s three-month climate outlook showed a high chance of above average rainfall for most of the eastern half of the Australian mainland and eastern Tasmania.

“This causes changes in wind, cloud and pressure patterns over the Pacific. When this change in the atmosphere combines with changes in ocean temperature, it can influence global weather patterns and climate, including increasing rainfall over large parts of Australia.” 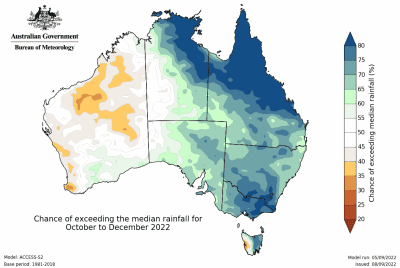 The Bureau of Meteorology is forecasting a wet start to summer with the formation of the La Niña weather pattern. Click to Enlarge

The forecast has put many in the northern rivers of NSW on edge, with devastating floods earlier this year still having an impact.

Farmer Neil Baker said he and his neighbours were still mopping up the mess from torrential rains earlier in the year, which had devastated Lismore and surrounding areas.

“We can’t believe it frankly, you just wonder where all the water’s going to go,” Mr Baker said.

“One of my neighbours had 1300mm of rain in 36 hours back at the end of February – that’s almost a whole year in a day-and-a-half – and the ground is still just absolutely soaked.

“People are trying to rebuild and get back on top of things, but another huge rain would just be devastating for us.”

“People just haven’t had time to prepare for more rain because it has been so wet already,” Mr Lowe said.

“While output for agriculture has been at record levels because of all the moisture, in some places it will actually be stopping people from getting onto paddocks to harvest their crops.

“Catchments are so full that there will be a chance of major floods if we get too much rain in the wrong place, we’re just going to have to prepare the best we can and hope for the best.”

Climate lobby groups have been calling the Federal and State Governments to implement recommendations from a recent inquiry into the floods earlier this year.

“A third consecutive La Niña is likely to bring above average rainfall on an already saturated east coast, spelling tough times ahead for many Australians,” Dr Bradshaw said. “The risk of extreme rainfall and flooding is also exacerbated by climate change, driven by the burning of coal, oil and gas.

“Helping vulnerable communities build their resilience to, and ability to recover from, worsening flood disasters must be a top priority for state and federal governments, and will help minimise the dangers and devastation of yet another La Niña event.

“This should include urgent implementation of the 80 recommendations of the Royal Commission into National Natural Disaster Arrangements, and the NSW Flood Inquiry.”