THE troubled Tabro Lance Creek abattoir in Victoria is set to re-open under new ownership, as a key platform in a new vertically integrated beef project. 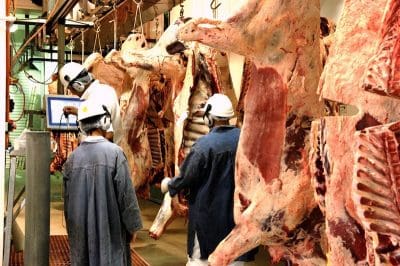 Mr Clarke, MMG’s executive chairman said the acquisition of Tabro and InterAgri marked the start of an exciting growth phase for the MMG 1829 group in its development of a vertically integrated Australian agricultural business.

Beef Central first wrote about the likely Lance Creek deal in this article back in February. At that time, the Clarke family was strongly rumoured to be heading the deal, but it was not confirmed by Tabro management.

The 500-a-day capacity Lance Creek facility holds an export approval for the China market, and is USDA export licensed.

“These purchases are the first step in a list of strategic acquisitions to create a supply chain that addresses key challenges such as food security and sustainability, with a strong focus on provenance to feed the growing demands of increasingly sophisticated consumers,” Mr Clarke said.

The new vertical supply chain would target domestic and international consumers via retail, food service and online markets, including world-class manufacturers, he said.

Mr Clarke said the MMG model was ‘seriously scalable’ and the business was set to pursue further acquisitions to bolster the supply chain and position it as a leading Australian agriculture company.

Under the new ownership structure, the Tabro name will soon disappear, to be renamed Mandeville Pty Ltd.

Tabro chief executive Shaun Brorsen said the acquisition by MMG meant that the processing plant would restart after a period in administration.

“MMG’s investment in the plant infrastructure will increase our output capacity from 500 to 800 head a day over the next 12 months,” Mr Brorsen said.

InterAgri owners Simon Hetherington and Adrian McCorkell said they were excited to be joining the MMG group, which would allow their business to accelerate its growth plans, selling more product into existing and new markets.

Almost immediately after that deal was struck, Australian cattle and sheep prices started to rise dramatically, and the business got into trouble. Both plants were shut for long periods during 2016-17, and the Lance Creek facility has not operated at all for the past two years. At one point in 2016, Chinese-owned Tabro attracted attention for late payment on slaughter livestock, an issue the company vowed to resolve.

The Chinese owners said they spent roughly $10 million on both processing plants during the 2015 Christmas shutdown period to lift efficiency and performance.

A 2018 deal to sell the Lance Creek plant to Chinese-owned Harmony Agriculture and Food Co went close, but Harmony ultimately pulled out of the deal, and last year went broke itself. At one point Harmony was apparently getting a small service kill done at Lance Creek.

Last year, Hengyang Group sold its second abattoir at Moe to large southern processor, HW Greenham, which has since successfully revamped and re-opened the site.

The Lance Creek (also known as Wonthaggi) abattoir is in some of the most productive dairy and beef farming country in South Gippsland, and in earlier times was well supported by local producers and agents across Victoria and beyond.