IN what is a rapidly emerging trend in carcase assessment in the Australian meat industry, three emerging objective measurement technologies last week received conditional approval for commercial use.

The approvals were made during an AusMeat Language and Standards Committee meeting last week. 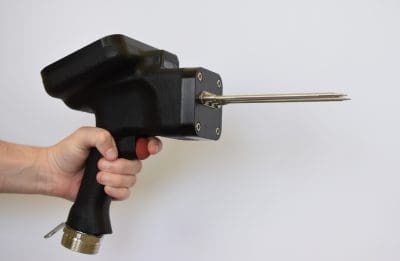 Joining the array of objective carcase measurement tools now being made available to industry are the MEQ probe, the MasterBeef camera, and the Frontmatic camera. All approvals were for certain traits only.

Considerable work is still required by beef processors themselves before any of the new technologies can be adopted for commercial use in the processing environment.

One of the emerging challenges is that each of the current devices only does part of the overall range of traits required for full chiller assessment. 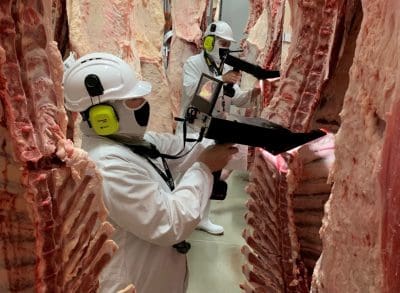 Click here to view an earlier article on the E+V camera. E+V cameras are installed in the Teys Wagga facility, currently used for feedback, but not yet for payment. Other Teys plants are likely to follow. E+V is also working on a smart phone based version of its technology.

Also in the development phase, under trial, is the VIAscan camera system, collecting data at Australian Country Choice in Brisbane. VIAscan has not yet been submitted for AusMeat approval.

Last year, emerging objective grading cameras such as E+V were limited to grading marbling scores of 6 or less (see Beef Central’s earlier report), but conditional approval was made in May last year for the Meat Image Japan (MIJ-30) camera to grade marbling across the entire spectrum from 0 to 9+.

AusMeat chairman and language and standards committee member Allan Bloxsom said the approval of any objective carcase assessment technology that met the industry’s standards had to be a ‘good thing’, helping overcome some of the issues seen in the past around subjective measurement.

“Technology is rapidly evolving in this field. The key is in being able to match, or better, the industry standard for assessment of a given trait. We don’t want to see what has happened in other parts of the world, where standards have been changed to match the performance of the machine,” he said.

The challenge that now lay ahead for researchers and developers was to pull the various technologies together, in order to cover the full spectrum of chiller assessment tasks.

“Integration of the various devices is one of the challenges that lays ahead,” Mr Bloxsom said.

In a press release issued on Friday, MEQ Probe said the company’s device was the only technology that has the ability to accurately measure both intramuscular fat (IMF) in lamb, and MSA marbling in beef.

The technology underwent stringent independent testing and had now been conditionally accredited measurement between the 100-1200 MSA point marbling range for beef.

“Marbling in beef and is currently measured using marbling measurement in chilled carcases where fat deposits and distribution on a cut surface of chilled beef is visually assessed by processing plant graders or grading professionals,” MEQ Probe’s statement said.

“This gives processors ten times the time to determine their cut design plan and saves on energy and chiller space,” the company said.

Hot carcase measurement prevented the need for extended chilling, which provided occupational health and safety improvements in the boning room.

Information about individual carcase was also provided in real-time, allowing processors to share insights quickly through the supply chain – with distributors, retailers, consumers and farmers.

“MEQ Probe enables greater consistency which ensures the industry can deliver on its brand promise with confidence,” the company said.

Processors Australian Country Choice and Teys Australia partnered with MEQ Probe to help the development of the device over the last 12 months.

MEQ Probe’s chief executive Remo Carbone said Australia’s beef quality was a point of pride, and with consumers becoming increasingly discerning when it comes to product quality, having an accurate, scientifically-backed measure of marbling was critical.

“Our conditional accreditation puts Australia at a distinct advantage and opens doors for what producers and processors can do in terms of branding and premium price targeting,” he said.

“MEQ Probe will continue to push the limits of our technology and work to bring even more value and understanding about the red meat we eat. We have a lot planned for 2022,” he said.