COMMERCIAL grading of MSA carcases using objective camera-based systems became a reality in the Australian beef industry for the first time this week, when Teys Australia commenced grading  using an E+V camera at its Wagga processing plant in southern NSW.

Teys plans to roll-out the system to other company sites after bedding the system down at Wagga, with Teys Naracoorte likely to be second in line, and Queensland plant to follow. Initially, only MSA-eligible carcases will be assessed, but longer-term, potentially all carcases passing through Teys processing plants will be analysed by the E+V cameras.

The grading cameras will be operated by existing accredited MSA graders, who will have the ability to over-ride and manually grade a carcase, if circumstances require. In practise, over-rides are rare, and will be indicated to the supplier should they occur.

The German-made E+V (VBG2000) camera system was approved for use towards the end of last year by the AusMeat Language and Standards Committee, having been calibrated against the Australian AusMeat grading standards.

Teys has been trialling the technology for the past two years, however logistical and technical challenges have delayed its introduction at Wagga until now. Integrating the camera system within Teys’ existing IT system has taken longer than anticipated, and access by technical personnel has been limited under COVID.

The E+V system is already in wide use in the US beef processing industry.

The E+V camera has been approved to measure (objectively) four MSA carcase traits – Meat Colour, Fat Colour, AusMeat marbling (0-5) and MSA Marbling (100-700). Other MSA traits like rib-eye area, pH decline, fat depth and ossification will continue to be assessed manually, but over time, some of those, like EMA, may be approved for E+V adoption.

Through the capture of digital grading images for each carcase, another important step being taken in the process will be the future ability to provide cattle suppliers with digital images of the grading site on each carcase. Beyond simply seeing how their carcases are performing, this will also provide valuable background in any grading dispute that might arise.

“Currently it’s a manual process to provide images to producers, but in a year or so, when the industry conditions improve, we’d hope to provide each producer with access to all their grading images via an image library, held on the Cloud,” he said.

Dr Langbridge said Wagga was chosen for the launch of the objective grading program, because it contained a very large marshalling area, which was being used for a fixed E+V grading station.

“The E+V cameras aren’t that compact or portable, and are connected by cable to a PC, which does the number-crunching and image analysis,” he said.

A similar marshalling chiller has been established at Naracoorte, which will be used for a static camera grading point.

“Those two sites fit the space requirements of the E+V technology quite well,” Dr Langbridge said. “At our other sites, space is going to be more of an issue. For that reason we are interested in looking at the MasterBeef camera grading technology, still in the AusMeat pre-approval process, which does not have the space requirements of the E+V camera.”

In another advantage, the E+V cameras have the ability to produce a USDA grading output at the same time as producing MSA measurements, allowing processors using the system to easily align MSA-graded product with the requirements of an export customer who may be more familiar dealing in USDA quality grades like Choice and Prime.

Teys Australia contacted its southern livestock suppliers this week to alert them to the grading changes.

“This development is in conjunction with our on-going commitment to improve and evolve our feedback information to all our livestock suppliers,” general manager livestock Geoff Teys said.

“Continuing our commitment to high quality and accurate data, these cameras will be continuously verified with the best MSA manual graders in the country, so suppliers can be certain that the information they receive is of the highest standard,” Mr Teys told suppliers.

Teys also plans to release a producer information sheet, to provide a summary on understanding the new carcase feedback.

Increased repeatability, from plant to plant

Program manager for the industry’s ALMtech meat quality trait research, Dr Peter McGilchrist, said it was an exciting day for the industry to see the technologies like the E+V camera reaching full commercial implementation phases. “This is the first vision camera to pass through AusMeat approval,” he said.

“The journey of these technologies is just so elongated, so to see the first example get there is really exciting. We know the biggest advantage of camera-based grading is that it is going to increase the repeatability in the grading outcomes, between plants. This is becoming more and more important as processing companies buy more plants, but also for some of the smaller supply chains who are using custom kills at multiple plants,” Dr McGilchrist said.

“It’s all about greater consistency of product through a brand.”

Even if a camera was not ‘perfectly’ accurate, provided it was precise in providing the same answer each time, the technology could be ‘trained’ over time to become more accurate, Dr McGilchrist said.

“The E+V camera has been accurate enough to meet the AusMeat standards, testing has shown, but it can continue to improve, as ever more data is collected. It’s already at least better than the technology we currently have, which is humans.” 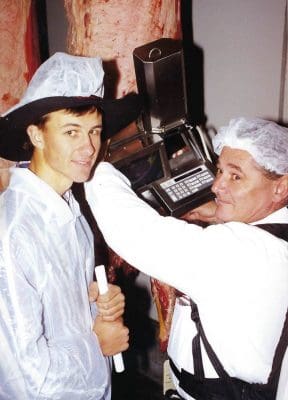 The VIAscan video image analysis cameras were widely used in carcase competitions from the mid-1990s.

AusMeat’s VIAscan camera-based grading technology went close to commercial adoption back around 1996, and again in 2012, but was only ever used for trial purposes by the main user, Woolworths. Feedback was provided to some Woolworths suppliers, but payments were never based on VIAscan images.

VIAscan was also used for carcase competition grading, but primarily for demonstration purposes.