The risk of foot and mouth disease (FMD) reaching Australian shores has increased with confirmation the outbreak in Indonesia has reached the tourist hotspot of Bali. 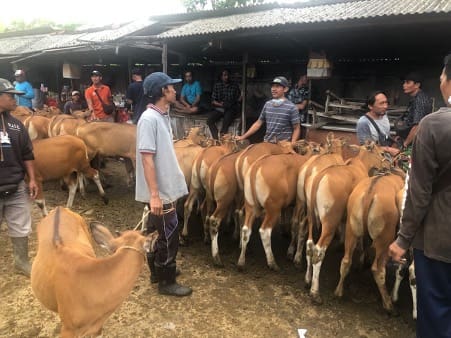 A letter from Indonesia’s Ministry of Agriculture’s confirmed the entry of FMD to Bali on Friday, with testing confirming 63 cows had been infected in three locations around Bali.

A lockdown has been imposed to stop the delivery of livestock outside Bali.

The infections in Bali add to the more than 230,000 animals now infected across 22  provinces in Indonesia since the outbreak was first reported in early May.

Indonesia began a nationwide vaccination program in mid-June and media reports indicate that the number of livestock vaccinated has so far reached 169, 782.

FMD is highly contagious and poses a major threat to Australia’s livestock sector and the wider Australian economy.

ABARES estimates a widespread outbreak would have a direct economic impact of $80 billion. (For more information about FMD visit the Federal Department of Agriculture, Fisheries and Forestry website here)

There are more than a dozen flights from Bali to Australia each day and that number is expected to increase in coming weeks as tourism rebounds in response to subsiding COVID restrictions.

The main religion in Bali is Hindu which means that there are large numbers of pigs as well as upwards of 600,000 head of cattle spread all over the island, Dr Ainsworth said.

“The pressure is now really on as infection will be in Seminyak and Canggu, the major tourist areas in a matter of days, if it is not here already,” he told Beef Central from Bali on the weekend.

Writing in Beef Central last week Dr Ainsworth said that until Bali is fully protected by vaccination of its cattle and pig populations, increased attention on tourists returning to Australia, especially their footwear, was warranted.

“Travelers are already used to a multitude of annoying Covid interventions so additional requirements such as ensuring that shoes are clean and walking through a wet sponge infused with disinfectant before boarding and after leaving the flight would seem to me to be simple and sensible measures which might help to address the new level of risk.”

Dr Ainsworth said there is no need to restrict tourism to Bali, just reduce the chances that one unknowing traveller will cost Australia and its livestock industries billion of dollars, not to mention the massive animal welfare implications.

“The risk will return to more traditional levels once Indonesia’s susceptible animal populations are fully protected by a comprehensive vaccination program.”