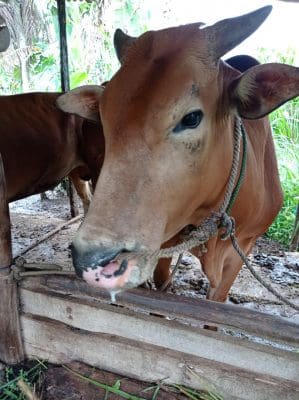 Pictures of infected animals in Indonesia.

A Foot and Mouth Disease outbreak has been reported in a provincial city in Indonesia, presenting an alarming escalation in biosecurity threats for the Asia Pacific region and Australia’s livestock sector.

The FMD diagnosis has been made by an Indonesian reference laboratory and is yet to be formally confirmed by the World Organisation for Animal Health (OIE).

Beef Central understands the Indonesian Government is in the process of collecting samples to send to an OIE world reference laboratory in England for formal diagnosis and determination of the exact strain so appropriate vaccines can be ordered.

Details of the reported incursion are laid out in an official East Java Provincial Government incident report and suggest the disease may have been spreading in cattle in and around the city of Surabaya on the large Indonesian island of Java for some weeks. 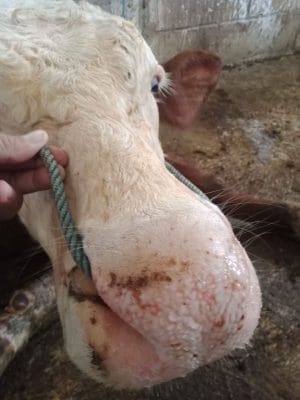 A translated version of the incident report says provincial officials have identified FMD in three different cases involving some hundreds of animals in Surabaya, the second largest city in Indonesia.

The veterinary report states that on Thursday, April 28 FMD was identified in 402 beef cattle spread over 5 sub-districts and 22 villages in the Gresik Regency, which takes in the northern and western suburbs of Surabaya.

The third case was reported earlier this week on Tuesday, May 3 in the Mojokerto Regency  to the south west of Surabaya and involved as many as 148 beef cattle spread over 9 sub-districts and 19 villages.

At the time of the report yesterday the outbreak was noted as affecting 1247 cattle across the four regencies, with clinical signs according to FMD disease. 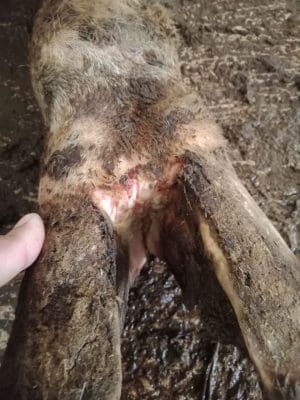 Pictures circulated with the report showed cattle with FMD symptoms.

The reported outbreak has coincided with the Lebaran holiday period during which time large numbers of Indonesian muslims travel home to their families from around Indonesia and around the world.

It is also a time when significant numbers of cattle, buffalo, sheep and goats are transported around Indonesia to be slaughtered for the festivals of Ramadan, which ended at the start of this week, and Lebaran, the main feasting time when relatives return to their family homes.

The timing of the reported outbreak during a period of large annual movements of people and animals is of concern for the potential spread of disease.

News of the reported outbreak should have customs and biosecurity officials in Indonesia and Australia on heightened alert status.

Many Surabaya residents travel to Bali for the Lebaran holiday, and many Australian tourists also come and go from the popular tourist centre, presenting another potential pathway for transmission. 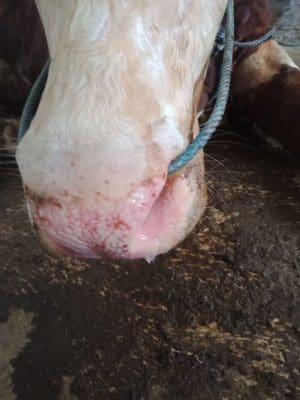 Clinical signs of FMD include high fever, excessive mucus from the mouth and foaming; sores in the oral cavity and tongue; loss of appetite, limpness, injuries to the feet and ending with the loss of hooves, difficulty standing, shivering, quickness of breath and milk production dropping dramatically and becoming thin.

Analysis has demonstrated that in Australia a small FMD outbreak , controlled in three months, could cost around $AUD 7.1 billion, while a large 12 month outbreak would cost $AUD 16 billion.

A 2001 outbreak in the United Kingdom caused losses of more than 8 billion pounds (approximately $AUD 19 billion). 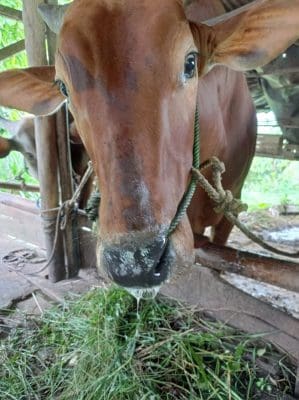 The Federal Department of Agriculture and Water and Environment has contacted industry groups this afternoon in an email stating it has received advice that FMD has been confirmed in four provinces in Indonesia. It notes that while no official declaration has been made yet, Indonesia is in the process of preparing an emergency declaration and preparing samples for testing at a world reference laboratory in Pirbright, England.

The message from chief veterinary officer Mark Schipp says the department is working to acquire as much information as it can and is engaged with Indonesia and global networks, and urges ongoing vigilance with regard to on-farm biosecurity.

“The department is aware of reports of Foot and Mouth Disease in Indonesia, in particular that more than 1,000 cattle are affected in four provinces of East Java,” a spokesperson said in a statement.

Cattle Council of Australia has this afternoon released a statement saying it has received advice that 1,247 cases of Foot and mouth disease (FMD) have been confirmed in four provinces of East Java, Indonesia (Gresik, Lamongan, Sidoarjo, Mojokerta).

“The Department of Agriculture, Water and the Environment is working to acquire as much information as possible from our contacts in the country and will update you as further information comes to hand. We are engaged with Indonesia and also working across our networks to establish the support that Australia and other global and regional organisations can offer to support a swift and effective response.

“Indonesia is our closest neighbour with whom we share an incredibly important bilateral trading partnership. The close proximity of Indonesia has major implications for our biosecurity system and disease-free status.

“Cattle Council urges all members to exercise vigilance on-farm by doing the following:

FMD – What to look for https://www.awe.gov.au/biosecurity-trade/policy/australia/naqs/naqs-target-lists/fmd