Why FMD is a bigger threat than Aus appears to recognise

Q. What is the risk of transmission of FMD from Indonesia to Australia?

A. In my opinion the risk is extremely high over the next 1 to 6 months.

The last case of Foot and Mouth Disease (FMD) in Australia was recorded in 1872. Since that time Australia has managed to remain free of the disease through a combination of effective biosecurity arrangements, strict animal quarantine and a measure of good luck. Indonesia has been free of FMD since 1986 providing a significant “barrier” to the disease which has been endemic in mainland Asia for centuries.

Outbreaks in Asia are relatively common, certainly in the order of several per year but the disease tends not to be a major problem for these countries as they are largely protected by highly effective vaccination programs. None of these countries export meat so their industries are generally not significantly impacted. Outbreaks usually result from the movement of animals out of unvaccinated areas, such as Myanmar into areas of neighbouring countries where for various reasons vaccine use has lapsed.

Considering the long history of infection in Asia with no transmission to Australia, why does the current outbreak in Indonesia represent a new and heightened risk?

There are four major factors which combine to produce a much greater and more immediate threat of disease transmission from Indonesia to Australia:

FMD is one of the most contagious of all animal diseases. Infected animals excrete virus into the air and through all secretions including saliva. Pigs are multipliers of the virus as they excrete up to 3000 times more virus into the environment than ruminants. FMD virus can be spread from animal to animal and by contaminated vehicles and equipment including footwear, hands and clothing. Signs of infection include fever, depression, reduced appetite, increased salivation, and lameness. Virus can be excreted from an infected animal up to four days before clinical signs are apparent. While the virus survives longer in the environment in cold temperatures, its survival is improved when it is enclosed in organic matter and the humidity is above 60pc. The humidity in Bali today is a little over 80pc and this is the “winter” or dry season.

With the advent of mechanical equipment for farming tasks, the primary role for Bali cattle is a store of value for their owners (see earlier Bali cattle article). The daily routine involves cattle being walked out from their secure overnight holding area to a location where they are tethered for grazing during the day. At about 5 in the afternoon the owners collect the animals and walk them home again where they are held in the secure location and provided with additional supplementary feed. “Mouse” Sullivan frequently visits these cattle and their owners near his villa in Seminyak. Much of the remaining land in the southern tourist areas of Bali is vacant blocks between tourist villas. 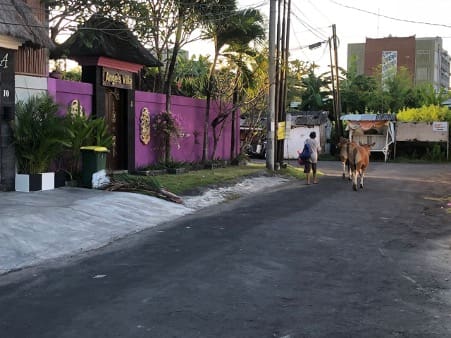 In the late afternoon these cattle are walked home through Seminyak passing tourist villas, local homes and small shops. 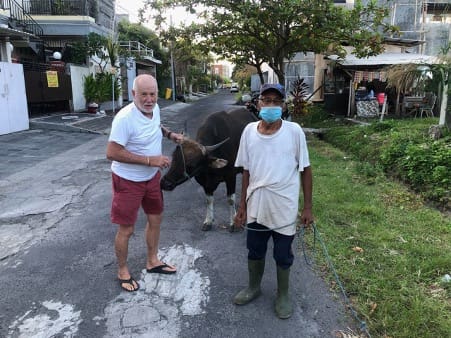 Bali cattle are generally very quiet and their owners are extremely friendly often allowing tourists to pat them and take photos. This vacant block in Seminyak is the secure nighttime home for more than a dozen cattle which are taken out to graze every day. 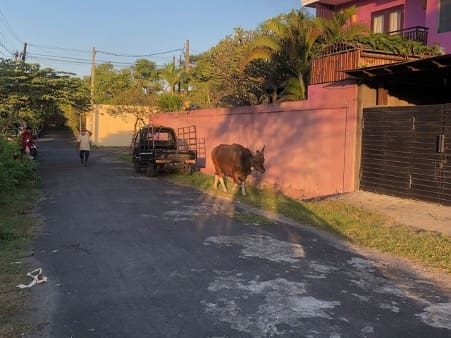 It is not too difficult to image this bull leaving a trail of virus from early stage foot and mouth lesions as he walks home passed this tourist villa shortly before the tourist walks out to get into their taxi to leave for the airport (12km away) for their 2.5 hour flight to Darwin. Many Darwin residents live in the large rural area surrounding the city where there are many opportunities to come across cattle, buffalo and pigs. The virus can survive several days in organic matter on the bottom of shoes.

In mainland Asia where Australian tourism is also very common, national FMD vaccination programs are normal practice so the chances of a tourist encountering an infected animal excreting large volumes of virus are remote. Cattle ownership in the middle of other Asian tourist destinations tends to be much less than in Bali.

There are a wide range of estimates on what an FMD outbreak in Australia would cost the economy and they range from 15 to 80 billion dollars over a 4+ year period. Regardless of the number, the impact to the Australian economy in general and the livestock industries in particular would be immediate and catastrophic with ongoing trade restrictions continuing for many years.

Considering the magnitude of the impact of an outbreak of FMD to Australia and the dramatically increased risk presented by the current epidemic in Indonesian I believe that it would be appropriate to upgrade the biosecurity measures to match this increasing risk. Until Bali is fully protected by vaccination of its cattle and pig populations, an increase in the attention paid to tourists returning to Australia, especially their footwear, seems to me to be warranted.  Travelers are already used to a multitude of annoying Covid interventions so additional requirements such as ensuring that shoes are clean and walking through a wet sponge infused with disinfectant before boarding and after leaving the flight would seem to me to be simple and sensible measures which might help to address the new level of risk. A search of flights this morning shows that there are 13 direct daily flights from Bali to Australian capital cities. This will increase by at least double later this year. There is no need to restrict tourism to Bali, just reduce the chances that one unknowing traveler will cost Australia and its livestock industries $50 billion dollars not to mention the massive animal welfare implications. The risk will return to more traditional levels once Indonesia’s susceptible animal populations are fully protected by a comprehensive vaccination program.