The ‘goldilocks zone’ for intensive ag in Australia

A Southern Queensland council brimming with feedlots and piggeries says intensive agriculture developments should be positioning themselves in the “goldilocks zone” – far enough away from built up urban areas to avoid biosecurity threats, but not too far from markets and ports.

The Western Downs Regional Council headquartered around Dalby is home to 68 feedlots and 23 piggeries.

CEO Ross Musgrove told yesterday’s TSBE Food Leaders Australia Protein 2020 conference in Dalby that it was no secret why so many feedlots and piggeries had chosen to develop in the region. 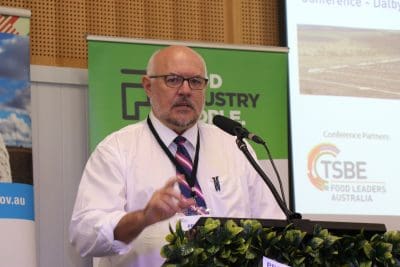 “This is the Goldilocks zone,” he said

The region was far enough away from large population centres to avoid major biosecurity risks, “but not too far away”.

“We have the grain you need in the quantity you need, most of the time; our towns provide variety and quality of services, our transport networks are good.

The southern Queensland council, which includes the Dalby, Chinchilla, Wandoan, Miles, Condamine and Tara areas, has also approved a further 50,000 head of new feedlot capacity in the past year, Mayor Paul McVeigh told the conference.

It also falls within a two hour radius of the international Wellcamp Airport west of Toowoomba, opened in 2014, an area that takes in 80 percent of Australia’s egg production, 65pc of Australia’s pork, 60pc of all lot fed cattle on feed in Australia, and 65pc of the country’s red meat processing capacity. 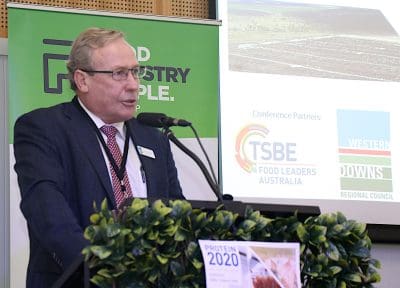 “Our region has everything that is needed for success in the intensive agricultural industry – we’ve got sun, we have got water, we have got space, we have got skilled labour, we’ve got construction capacity, but the key is the abundance of high quality grain, hay and cotton.”

The recently opened second range crossing which by-passes Toowoomba – which Mr McVeigh referred to as the “Western Downs connection road” – had also brought major improvements in transport connections between the region and Brisbane and South East Queensland.

The Western Downs Council is proactively encouraging new intensive agriculture developments to establish in the region, and has succeeded in attracting new enterprises by cold calling businesses outside the region and urging them to develop in the Western Downs.

One of the key issues for future growth surrounds access to water, and the availability of water for new intensive agriculture developments.

Buying existing water entitlements from other users, or collaborating with energy companies to reuse extracted groundwater, are the main options for new agricultural developments to access the water they need, but, as previous experience has shown, the latter is not always a smooth or easy process.

Mr McVeigh said ensuring the region has adequate and ongoing water supplies is a priority for the future.

“One of the great debates from all council leaders coming out of drought, whilst we’ve had magnificent rain, is that we need to ensure we will have water well and truly in the future to be able to underpin the capacity to expand further agricultural sectors and our intensive ag industries as well,” he said.

“As councils we have combined our forces to run with working out how we can get potentially new water or more efficient ways to use water in our regions.”

One strategy to deliver that goal highlighted at yesterday’s conference is a proposal to launch a new $100 million, 10 year cooperative research centre focusing on the entire Murray Darling Basin region. 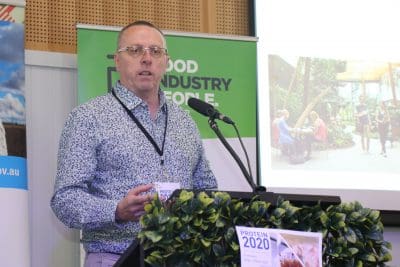 Proposal leader Gavin Ash from USQ said, alarmingly, the amount of funding dedicated to water research across Australia has declined dramatically since the late 1980s, as he illustrated in the chart below.

He said there has been an enormous amount of modelling done in the basin, but none of the individual models talk to each other.

“They are all independent, they all have different variables and they’re not useable,” he said.

“What we need to do is to actually start to integrate these, work out whether there are pieces to the puzzle that are missing, and put those pieces in there and deliver that in an effective way.”

The proposal for funding for the One Basin CRC will be lodged in June.

‘The difference that water makes’

“Isn’t it incredible how quickly our mindsets change,” he said.

“We have seen an enormous change in the outlook, and the mindset of our business community and our residents has changed completely with a fair bit of rain.

“That just shows the difference that water makes, and how important, how vital it is.

“We’ve noticed it straight away in council, where at the end of last year it was pretty quiet, people are now coming to talk to us about new investments.” 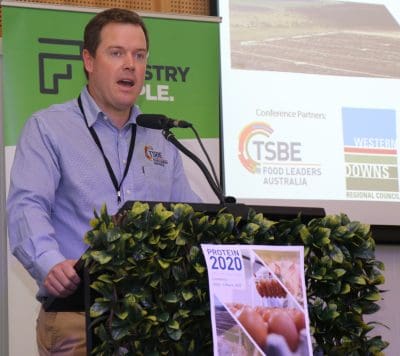 In addition to the renewed discussions about new or expanding feedlot developments, Mr Musgrave said the council recently gave approval for a $10m livestock processing facility at Jimbour processing 25,000 tonnes of beef and bacon a year.

“There is a need and an acknowledgement within the green sector that intensification of animal production is vital,” Mr McConnel said.

Managing biosecurity threats was also a key part of the conference, which focused on intensive agriculture in the beef, dairy, poultry and pork industries.

The conference was told that with both African Swine Fever and Foot and Mouth Disease having already been detected in goods carried by travellers arriving in Australian airports in recent years, the need for vigilance, protective fencing and stringent biosecurity procedures had never been more important.