About half of Australia’s total cattle feedlot capacity can be found in a footprint of inland of Queensland known as the Surat Cumulative Management Area.

The region – highlighted in white below – stretches from Emerald in Central Queensland to St George in the State’s south west and Toowoomba in the east. As a major grain and cattle growing region with access to Great Artesian basin groundwater below, it is easy to see why the area become the epicentre of Australia’s lot feeding industry.

However, what is harder to see is how the region’s economically important feedlot industry can expand much further under a new groundwater allocation plan proposed by the Queensland Government.

The State’s draft Great Artesian Basin and Other Regional Aquifers (GABORA) plan will see most groundwater still available given to coal seam gas or mining projects and very little to agriculture, including future feedlot or other intensive livestock industry development, including cell grazing.

Groundwater is the only secure water available for feedlot development in the region, but rights to that resource now largely lie with gas companies under the State’s Petroleum and Gas Act.

Scrutiny of the draft water plan by the Basin Sustainability Alliance has identified the extent to which the growing groundwater take by the coal seam gas industry, which has grown from a standing start a decade ago to having more than 6000 wells in the Surat CMA today, threatens to stifle future agricultural development in the region.

The CSG industry now draws some 65,000 megalitres (ML) of groundwater to the surface each year in the region, according to the 2016 Surat CMA Underground Water Impact Report.

The grazing and feedlot industries take a combined 54,738 ML of Great Artesian Basin water in the Surat CMA.

The GABORA plan covers the entire area coloured yellow below: 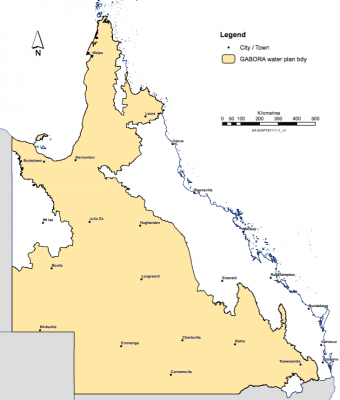 In this total region, the draft plan says 35,055ML of groundwater is unallocated and available for new development.

In the Surat Cumulative Management Area, the heartland of feedlot activity in Australia, just 840ML is available for future agricultural developments.

The Department of Natural Resources and Mines told Beef Central that the most highly used aquifers in the Surat Basin (the Springbok, Walloon, and Hutton aquifers) have declining pressures and will continue to be impacted by CSG activities, so no unallocated water has been set aside for future agricultural development from those main aquifers.

As a result it is limiting future development for agriculture in the Surat CMA to 840ML from the Precipice Sandstone aquifer, the bottom layer of the Surat Basin.

Were all of that water to be earmarked for future feedlot developments (unlikely, as the 840ML is for all of agriculture), it would allow for total feedlot expansion in the area of only 35,000 head (which compares to existing feedlot capacity in the region of around 600,000 head).

That is based on an industry standard of 24ML per year required for drinking water for 1000 cattle.

24 ML is about the same amount of groundwater that two CSG wells typically draw to the surface each year (they average 12ML/well/year) in order to extract gas from coal seams.

Some feedlots receive treated or untreated groundwater directly from CSG companies under Conduct and Compensation Agreements, Beneficial Use Agreements and Make Good Agreements made on a confidential basis. This “re-use” is a potential source of groundwater for future feedlot developments, but one that can involve complexity and uncertainty, as a newly unfolding legal battle between a feedlot and a CSG company is demonstrating (more in coming days).

DNRM says deeper water may be available, but costs are prohibitive

The draft GABORA plan proposes to make water available for new developments, including feedlots, through a range of mechanisms such as relocation of licenses, entitlements for saved water through privately funded capping and piping programs and unallocated water reserves, the Department of Natural Resources and Mines told Beef Central.

The Department suggested that an additional 845 ML of water could also be available for future feedlot developments from the Clematis Sandstone, a deeper non-Great Artesian Basin aquifer.

However, the Department acknowledged that this aquifer is quite deep in some areas.

The Clematis would in fact require bores to be drilled to depths of some 2000 metres to 3000 metres.

An industry quote received by Beef Central indicates that it could cost well over $1 million and possibly several million to drill and case a bore to that depth.

‘Once you get into depths your costs just blow out’

Pumping costs can also be prohibitive. One driller explained he is currently running a pump to a depth of 350 metres which will cost about $80,000.

“Once you get into depths your costs just blow out,” he said. “Every metre you go deeper it gets more and more difficult, and more and more expensive.”

The Clematis Sandstone is the purple shaded aquifer shown in the lower centre of the above cross section. Click on map to enlarge.

Another Queensland Government report examining the hydrological framework of the GAB does not paint an optimistic picture about the potential of Clematis as a viable source of water for future feedlot developments.

The report notes that the depth of the Clematis makes access to its water restrictive. It further notes that while it is capable of producing small supplies of reliable good quality water, “low yields” are a potential constraint on future water demand and availability.

‘Primary producers have been left with a few crumbs’

In its submission to the draft GABORA plan consultation process, the Basin Sustainability Alliance said the favourable allocation of water to the resources sector, and lack of allocation for agriculture, demonstrates where the Government’s priorities lie.

“The unlimited take of Great Artesian Basin water for the gas industry… is choking agricultural expansion and development of new enterprises,” the BSA submission said.

“The Queensland Government has given CSG producers and miners automatic rights to take unlimited volumes of water, and primary producers have been left with a few crumbs.”