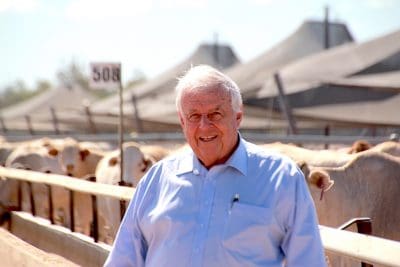 Max Winders at his Wambo Feedlot west of Dalby.

A Dalby feedlot operator has launched Federal Court action against the Queensland Gas Company, in a case that underscores ongoing tensions between landholders and coal seam gas companies over access to groundwater.

After four years of negotiations to secure water produced from gas wells operated by Queensland Gas Company on their property in order to supplement their feedlot’s water supply, but having received no water, Max and David Winders’ Wambo Cattle Company commenced Federal Court action last week seeking an order for the company to supply it with water from its wells.

The CSG industry’s rapid growth in southern Queensland over the past decade has generated concerns from agricultural operators who rely on the same sources of groundwater, amidst reports of declining water pressures, falling water tables and gasification of long-established water bores.

Max and David Winders’ Wambo Feedlot is located near Dalby in what has been informally dubbed the “Wambo Energy Junction”. Within close proximity to their feedlot are hundreds of CSG wells, several gas and water pipelines and three gas-fired power stations accessing the interconnector to the national energy grid.

The area has been identified in reports prepared by Queensland Government’s Office of Groundwater Impact Assessment (established in 2011 to manage impacts of groundwater extraction by the resource industry) as an immediately-affected and long-term affected groundwater area.

Gas tenure holders are obliged under Queensland’s Water Act 2010 to commence “make good” negotiations with owners of existing and new bores located within an immediately affected area, as well as to consider the potential impacts within a long term affected area.

Queensland’s CSG Water Management Policy of 2012 also prioritises the use of “associated water” from CSG developments for beneficial use for other users, for example agriculture, livestock and town water supplies, or for ‘making good’ impacts caused to existing and new bores by CSG gas extraction activities.

The development of the water supply to Wambo Cattle Company’s (WCC’s) 11,000 SCU feedlot, operational since 2005, was based on obtaining drinking water for cattle primarily from the property’s surface water storage dams, and supplemented by groundwater extracted from bores sourcing Surat Basin aquifers such as the Precipice, Huttons and Walloon Coal Measures.

According to court documents filed last week, this groundwater supplementation was expected to come from WCC’s own bores, constructed in accordance with licenses WCC received prior to the development of the feedlot to its earlier-approved 24,000 SCU capacity.

The water licenses enabled the extraction of water from aquifers which had since become subject to dewatering through CSG extraction.

Court documents indicate that WCC has been able to supplement its groundwater supply through a successful beneficial water use partnership with CSG company Arrow Energy.

Arrow Energy began extracting water from the Walloon Coal Measures east of the feedlot to supply gas to two nearby gas-fired power stations around the same time the development of WCC’s Wambo Feedlot commenced.

WCC was permitted to tap into the pipeline on condition that water sourced from WCC’s own dam could be diverted to the power stations, if the CSG-water supply failed.

WCC then constructed a pipeline from the Arrow pipeline to its water supply dam, to a point where the untreated CSG-water could be mixed and diluted with dam water to provide a stable and quite acceptable quality of water for cattle in the feedlot.

Arrow later constructed a separate pipeline to the feedlot water supply dam and the feedlot has received a reliable supply of good quality untreated CSG water from Arrow’s nearby Daandine gas fields on an ‘as-available/as-required basis’, in terms of agreements formalised in a 2010 Water Usage Deed.

WCC said the water from Arrow had proven to be very useful in securing the ability of its custom feedlot to guarantee water supply to the owners of cattle on feed, and had assisted WCC in meeting its customers’ expectations during low rainfall periods when the feedlot’s services were most needed.

Following the successful augmentation of its feedlot’s water supply with untreated water from Arrow Energy, in 2013 WCC  began negotiating with Queensland Gas Company to receive water from its wells on the property.

Last week, after four years of negotiations and agreements but still no access to water from QGC, WCC commenced Federal Court action seeking an order for the company and its international owner Shell to supply it with CSG water.  (Shell also owns a 50pc share of Arrow Energy, with the other 50pc owned by PetroChina).

Mr Winders’ statement of claim lodged as part of the proceedings alleges the following:

WCC’s statement of claim seeks an order under Australian Consumer law for QGC to provide it with water and to undertake ‘make good’ measures in accordance with the Queensland Water Act 2010, and is also seeking damages including accounting, hydrology, legal and valuation costs.

As a matter is subject to Federal Court action, parties involved are limited in what they can say about the issue publicly.

A spokesperson for QGC told Beef Central that the company plans to strongly defend the matter, “with our preference being to continue to negotiate an outcome with WCC directly”.

“It has always been and remains our intention to provide WCC with untreated water however this needs to be done so in accordance with necessary safety provisions”.