Slaughter steer prices have remained steady at about Rp50,000 per kg live weight during November. The increase in the AUD price above is purely related to currency movements. The market remains in distress with weak domestic demand for fresh beef combined with imported steer prices at their highest levels ever: AUD$4.50 per kg for feeder steers in Darwin.

As a result, export numbers continue to fall from 20,849 feeders in October to 14,512 in November.  October also saw 1,449 buffalo shipped from Darwin and 1,029 breeders sent from Broome. At this time I only have figures for Darwin exports for November which were 14,512. Year to date buffalo exports to Indonesia at the end of October were a little over 7,170 head.

The bad news for importers and exporters is that there is no sign of Australian cattle prices falling in the near future. On the contrary, Tipperary station, only 200km south of Darwin sent steers 400kg steers all the way to Roma in  Queensland (2800km) where they sold for as high as AUD$6.44 per kg live weight. See Beef Central article. With the recent heavy rains across eastern Australia these record prices are likely to continue for some time to come.

The Indonesian press reported that Bulog have imported 95% of its 80,000 tons allocation of Indian Buffalo Meat (IBM) for 2021. It is a little strange then that my agent in Jakarta has not been able to find IBM in any of the supermarkets that they survey. The press report also noted that an additional 30,000 tons of IBM may also soon be allocated. Berdikari has also stated that it has imported 16,594 tons of frozen Brazilian beef which represent 83% of its import allocation. 11,800 tons of this amount has been distributed into the consumer market. Presumably the balance is held in quarantine cold stores pending the outcome of the Brazilian BSE case investigation. 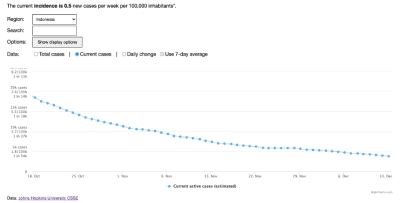 Statistics above from JHU showing a steady reduction in cases in Indonesia through October, November, and the beginning of December.

Slaughter steer prices remain at the Dong82,000 mark although demand is extremely weak. During October only one shipment left from Broome (Western Australia) for Vietnam with 2,542 head onboard. I don’t have official figures for Townsville for November but advice from agents is that there were no shipments exported during this month.

I am still not able to discover if the Brazilian cattle have been released from their special BSE quarantine at the time of writing this report.

Vietnamese online retailers are working hard to keep prices low by importing frozen product from Australia (and elsewhere) and offering full cuts to the public through internet marketing. See the advertisement below selling Kilcoy knuckle. Other exporters seen on the Vietnamese internet marketing sites included Teys, Hinterland, Meramist and Ralphs. See the graph below from JHU showing a steady rise in Covid cases in Vietnam in recent months. 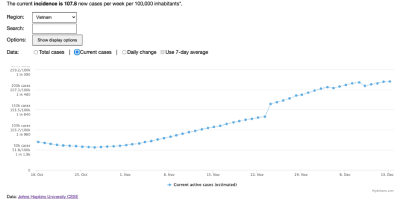 Not much good news anywhere for Vietnam with African Swine Fever continuing to produce new outbreaks across the country. See FAO map below. 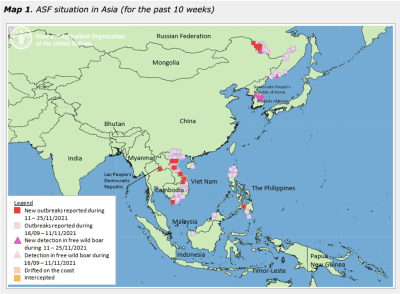 Slaughter cattle prices have remained generally stable with only a very slight reduction in the local prices from Y35.6 in October to Y35.2 per kg live weight in November. The AUD price has risen a few cents as a result of currency movements. Wet and supermarket beef prices appear to be on the rise as is the case with chicken and pork. This may be a result of the failure of the Brazilian beef imports to recommence after an unusually long delay of three months following the 2 reported cases of atypical BSE.

It is interesting to note that on the latest ASF map (above) from the FAO there are no cases of ASF reported in China since the middle of September.

See below a graphic showing the rise in consumption of poultry, beef and sheep meat at the expense of pork.

Official Australian government statistics show that 11,240 breeding cattle were exported from Portland to China during October. I assume they were dairy cows.

Slaughter cattle prices have risen for the first time in many months. The November rate is 135 Peso per kg live weight which has moved in line with price rises in most other proteins including pork, chicken and fish. Producers advise that stock feed and fuel prices are rising as well.

The Port of Darwin reported that 2,023 head of cattle were exported to the Philippines during November.

One aspect of good news is that Covid cases appear to be steadily declining. My agent reports that vaccination rates are now rising relatively quickly.

Covid cases appear to be declining as seen in the JHU graph below. My agent reports that Thailand is no longer under lockdown with domestic travel slowly returning to normal levels. The Myanmar border is open once again for cattle imports although the demand is low because the usual buyers are not confident about the future of domestic demand with many feedlots closed.

Still travelling in the USA and Barbados 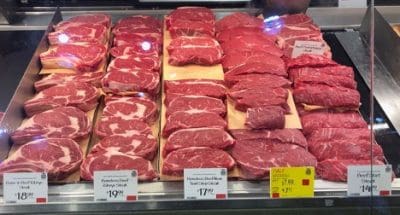 Whole Foods supermarket in New York. Rib eye @ USD$19.99 per lb = AUD$60.38 (@73cents. This supermarket chain has a similar profile to Coles and Woolworths in Australia. It is owned by Amazon so you can order all of their goods online and have them delivered to your home just like everything else sold by Amazon. 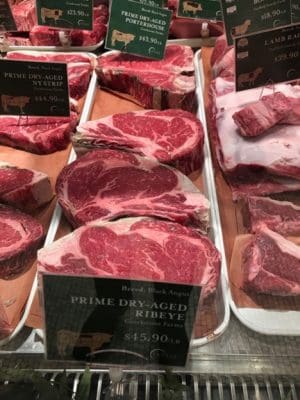 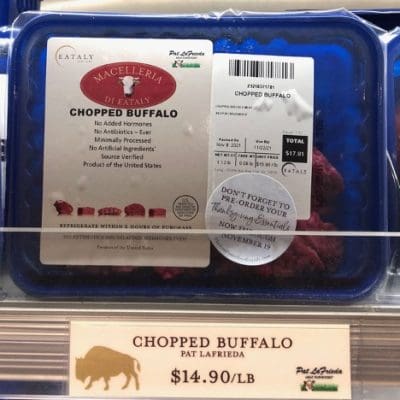 Chopped Bison converts to AUD$45.00 per kg at Eataly in New York.

New York has many special dog food shops with all manner of delicacies for pets. Beef and Russet Potato in bulk for USD$7.29 per lb or AUD$22.02 per kg. 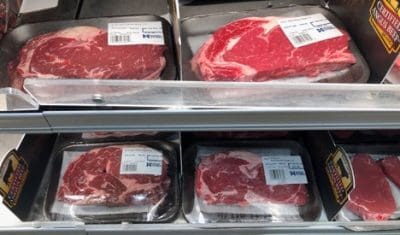 Massy Supermarket in Barbados offers US Certified Angus beef for BB$105.99 per kg which converts to AUD$73.88 per kg. 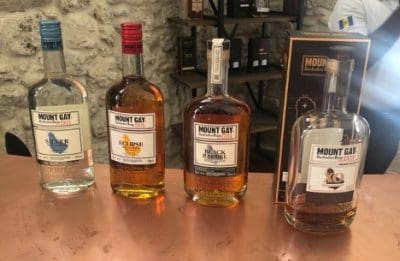 But this outstanding Mount Gay rum sells at very reasonable rates as it is made locally in the world’s first rum distillery which was established in Barbados in 1703. And a top drop too.