Slaughter steer prices remained steady during August while demand from butchers was weak leading to a continuation of the build-up of overfat cattle in the feedlots.

Slaughter price reports ranged from a high of Rp52,000 per kg live for the best steers in Java to Rp47,500 in Lampung. Fat cow sales were reported as low as Rp44,000 per kg live weight in Sumatera. Considering the numbers on feed, the anaemic demand and the fact that slow sales means cattle getting fatter than the market prefers, it seems likely that prices will weaken further in the coming months.

A very unfortunate combination of Covid 19 crushing incomes in Indonesia at the same time as cattle prices continue to rise even higher in Australia is creating an exceptionally difficult commercial environment for the trade. For the first time in some years, shipping companies are finding it difficult to find a customer for their next voyage. For the last few years many ships have been booked on long term charter, usually one year at a time. My advice is that most of those term charters are not being renewed once their term expires. This takes the pressure off exporters to continue to run ships at a loss so the heat is now back to the shipping companies who have to find alternative employment for their vessels. This might mean movement to another part of the world or dropping the anchor for maintenance. Owners will also review their older vessels with the potential for some to be scrapped.

I am writing this report from hotel quarantine in Manila where I left my ship after travelling with a load of heavy cattle from Townsville to Vietnam. After discharge, the ship was advised that there was not another voyage contracted so their plan was to drop anchor in Manila Bay where a number of the crew were to be changed over and routine maintenance could be undertaken. Fortunately I was able to leave the vessel instead of sitting in Manila Bay for an undefined period. As it turned out the Master told me just as I was leaving the ship that he was advised of a new charter to load out of Western Australia.

During August President Jokowi signed a Presidential decree to establish the National Food Agency which has the task to coordinate, formulate and establish food availability policies, stabilize food supply and prices to promote national food security. The agency’s authority covers nine staple foods including rice, corn, soybeans, sugar, onions, garlic, eggs/poultry, beef and chillies. The regulation appears to ban private companies from importing these staple foods. Given that these roles are already managed by a number of other government agencies including the Ministries of Agriculture and Trade as well as Bulog and private enterprise it will be interesting to see who is finally in charge of what. Indian buffalo meat (IBM) continues to be absent in the supermarkets surveyed by my reporter although others advise that it is still available at some outlets.

Darwin feeder cattle exports to Indonesia during August totalled 25,670, a surprisingly strong number considering the weakness in the market. This may be due to a common business practice of the trade in which an exporter tries to sell more than one shipment to their customer in advance with confirmations of consignments often made some months before the stock are actually delivered. While back to back shipments help to keep the operational costs down it can have a rather nasty outcome if the price of cattle rises sharply above predicted levels. In this case the risk can be offset by buying all of the  contracted cattle for the scheduled price at the time when the multiple consignment deal is done. This means a large investment in stock for an extended period so there are additional costs.

Covid 19 case numbers have fallen dramatically during August although this may be partly due to a new focus on vaccination rather than testing. Advice from Jakarta indicates that the situation is still very serious regardless of the statistics. In Bali the vaccination numbers are very encouraging with 72% of the population having 1 vaccination while 46% have had their second dose. These figures are even more encouraging considering that the population that these numbers are based on includes all children so the percentage of double vaccinated adults could well be more than 60% already. Health authorities report that the current rate of vaccinations delivered across Bali is about 39,000 per day or close to ¼ million per week.

Darwin feeder steer prices rose again during August with a rate of AUD$4.25 quoted for the end of the month. Advice from those close to the market suggest that it could even go higher from here. This demand for feeders is driven by a mix of live export buyers and eastern state restockers and lot feeders. Slaughter steer prices ex Townsville were relatively firm with the quotes for the end of August at around $3.80 per kg live.

Slaughter rates in Dong continue to hold steady at their recent levels during August but like Indonesia, domestic demand is very soft so the demand from butchers is extremely weak.

The covid 19 pandemic continues to rage out of control with daily cases during August 50 percent higher than last month although the extreme peaks in new daily cases reported have declined. The resulting lockdowns in some parts of Vietnam are so strict that the importer of our shipment had to get special dispensation from the health authorities for the cattle trucks to travel to and from the port to discharge our vessel. Health precautions at the ports are the strictest that I have seen including during the main pandemic surge in mid 2020. Discharging in Vietnam. Everyone has a mask and none of these stevedores can come onto the ship. NO CONTACT. They are as frightened of us as we are of them.

My market reporter who lives in Ho Chi Minh city advises that all wet markets and most small shops and supermarkets are closed to normal retail activity with the majority of all shopping carried out with a mix of online/telephone purchasing and home deliveries.

Online marketing has ramped up to ensure a full range of food is available.

The graph above is from the JHU showing the extreme spike in cases at the end of August.

The most interesting news this month was that 14,000 bulls were loaded on the MV Nada in Brazil for delivery to Vietnam with an ETA during the last week of September. There are so many assumptions involved in the conduct of this shipment, none of which will be proven until well after the cattle are delivered, slaughtered and consumed so I think it is best to wait and find out the facts rather than speculate on weight losses/gains, temperament, meat quality, profitability etc. One thing that is certain is that with a return voyage taking about two months with 14,000 per voyage, this very large vessel can only deliver a maximum of 84,000 head per year.

Slaughter prices have declined very slightly in local currency this month with the  Shanghai/Beijing average rate falling from Y35.9 in July to Y35.4 by late August. The apparent rise in the AUD rate above is due to currency exchange movements. There was no consistent pattern of price movements with retail beef, chicken or pork prices in Shanghai or Beijing during August.

As reported by Beef Central, the two recent Atypical BSE cases in Brazil will lead to a gap in beef shipments to China. Last time this occurred as a result of atypical cases, exports were halted for only two weeks. Given that Brazil is China’s largest exporter and Argentine exports are temporarily halted there could be a short but sharp down turn in product available in the market in the coming months. 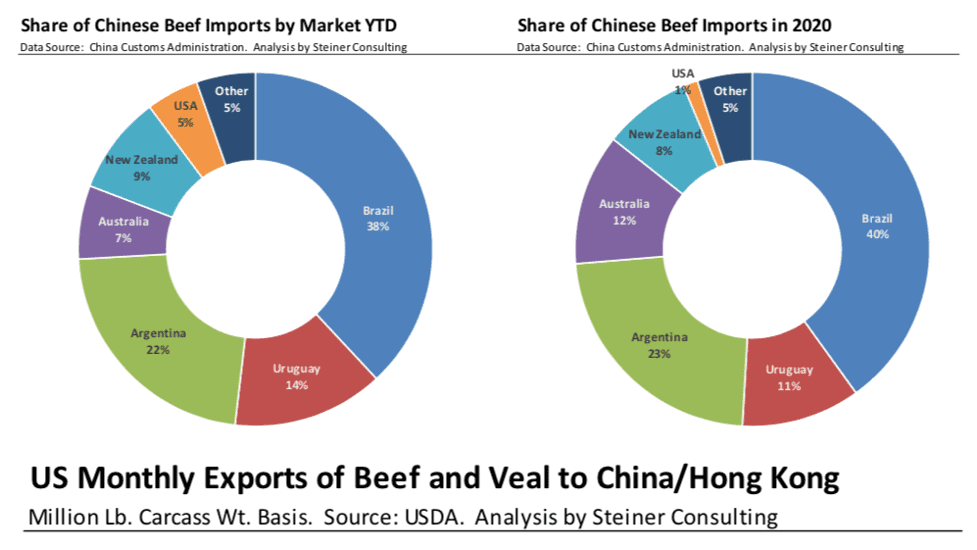 The Australian share of exports to China is shrinking but might see a resurgence if the Chinese buyers need to fill the short term gap left by Brazil and Argentina.

In July China reported that it was vaccinating 20 million people per day! This statistic is believable although the very low number of cases officially reported is probably due to this quite sensible focus on vaccination rather than testing. There are press reports that China has already supplied 350 million doses of the two vaccines that it makes to more than 75 nations.

Major floods have been reported again this month with the worst events in the Sichuan region in South Western China which is a major agricultural and industrial production area.

As I write this report there are many media articles about the China Evergrande Group which is China’s largest real estate developer and regarded as “too big to fail”. Reports suggest that the company is having difficulty paying its debits and if it defaults then it has the potential to have a devastating impact on the rest of the sector.

My agent has not sent me any information this month which is very unusual as he is usually one of the first to report. I hope he is safe.

Covid 19 has got significantly worse since July with daily case reports roughly doubling. I am currently in a quarantine hotel in Manila where the protocols are extremely strict. To get off the ship and come to the hotel (with a number of the crew) the whole crew had to first be health tested on the vessel, then when everyone was declared healthy those ending their contracts were allowed to come ashore. See photos below of the replacement crew coming onboard in full PPE suits and then some of the crew leaving the ship with me in full PPE including booties, hoods, gloves, face masks and plastic face shields. Replacement crew coming aboard after they have undergone a long quarantine period in Manila. This Covid 19 changeover process involves an enormous amount of organisation, coordination and cost. Some of the crew leaving the ship with me. It is quite a process to put on the full kit including overalls, gloves, booties, hoods, masks and plastic face shields. Fortunately it was midnight and raining otherwise it would have been extremely hot.

Prices of slaughter cattle remain weak as per last month which is not surprising considering that new Covid 19 cases reached a peak during late August and still remain at the very high levels seen in July. Consumers have their movements highly restricted and their incomes are reduced so until Covid is brought under control the market for everything including beef is likely to remain depressed.

I have been receiving reports from a number of diverse sources that the situation in Myanmar could soon be moving towards civil war. Reports suggest that there may be some level of coordination between the many traditional ethnic rebel groups and large numbers of the civilian population opposed to the military takeover. Considering the rebel groups have always had easy access to weapons and military equipment there seems to be potential for this situation to escalate into large scale clashes across the country.