WOOLWORTHS, the nation’s largest red meat retailer, has clarified the reasons behind its decision to remove Meat Standards Australia-graded symbols from its retail beef packs.

The company told Beef Central on Friday that the move had nothing to do with any lack of commitment to the MSA program, not did it reflect company concerns over any negative tenderness impact of Modified Atmosphere Packaging under the MSA model, as one theory has suggested. 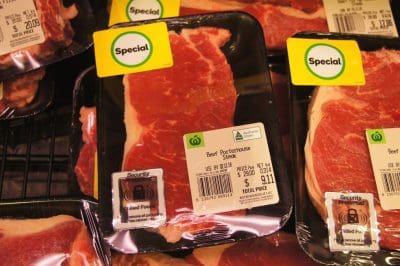 Instead the removal of MSA symbols from packs was part of a broader beef rebranding project being undertaken by Woolworths, backed by customer research suggesting that many consumers did not understand what the MSA symbols meant.

Woolworths was a collaborator in the development of the MSA system and the first national retailer to adopt the system in 2012. The company remains one of the largest MSA program stakeholders in the country, accounting for around 30pc of red meat retail sales across Australia.

Woolworths head of meat, Chris Croese, said his company remained committed to the science behind MSA, and providing customers with consistent quality beef.

“We understand our customers didn’t necessarily understand the MSA label, so we are looking to develop simpler quality messages on our packaging in the future,” Mr Croese said.

The Woolworths meat business is currently working through a detailed transformation program from an in-store production model to a case-ready model, designed to further improve how fresh meat is delivered to customers, both now and in the future.

The phasing-out of MSA logos will bring Woolworths in line with broader industry trends, where the MSA system and science is now seen as a tool used to underpin commercial brands, as opposed as a co-brand or symbol of quality in its own right. 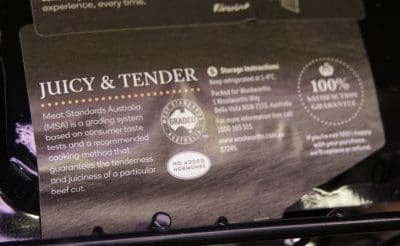 This VSP-packed premium steak offering seen in a Woolworths store on Sunday continues to bear the MSA logo and description on the reverse side of the pack.

Until its recent removal, Woolworths beef was one of only a handful of customer-facing retail brands to carry the MSA symbol on the front of its packaging. Based on a store visit on Sunday, some Woolworths beef products continue to carry MSA references and symbols among product information on the reverse side of the pack.

“There will be no changes to the ‘back end’ of our business as a result of this decision,” Mr Croese told Beef Central. “We still require our supplier partners to maintain MSA accreditation and to supply and process cattle against the current standards.”

A second theory emerged in industry circles last week suggesting that Woolworths’ decision to drop the MSA identity from its retail packaging was related to research suggesting that Modified Atmosphere Packaging – widely used in supermarket retailing – has a negative impact on beef tenderness. The MSA impact from MAP packaging could potentially be pushing Woolworths’ three-star MSA product outside the acceptable MSA eating quality range, one stakeholder suggested.

Click here to view an earlier Beef Central article on the topic.

A Woolworths contact said the company’s MSA label decision was not influenced by the packaging/tenderness research, pointing out that Woolworths had already started to shift more of its grilling cuts out of MAP packaging into vacuum skin-packs (VSP) and other forms of packaging, well before the MAP research was competed.

He said the move to alternate packaging was driven by the opportunities for extended shelf-life. Shelf-life is of critical importance in fresh meat retailing, where mark-downs and product dumps can significantly impact profitability, in an expensive fresh food commodity like beef.

MLA general manager for producer consultation and adoption, Michael Crowley confirmed to Beef Central on Friday that no changes had been made to the MSA pathways model to account for MAP packaging’s impact on tenderness.

However a range of changes to the MSA model, including issues like MAP impact; the way carcases are assessed for tropical breed content; and more cut-by-cook combinations would be considered for the model by mid to late next year, Mr Crowley said.

“We’ve completed the research into the tenderness impact from different packaging solutions, and are now working with industry on implementation – but that is going to take some time.”

He said Woolworths remained heavily committed to the MSA program and continued to grade all cattle, but was also making decisions within its retail business to better communicate quality attributes to customers through its brands.

“Woolworths is in the process of re-vamping its fresh red branding in store, segregating on quality into different tiers. MSA will be used to inform decisions about what quality goes into which brand, matched with cut-by-cook methods,” he said.

Mr Crowley said over the past six to eight years, there had been a substantial move away from promoting MSA to consumers as a brand itself, to simply using the program to underpin commercial beef brands in the market place.