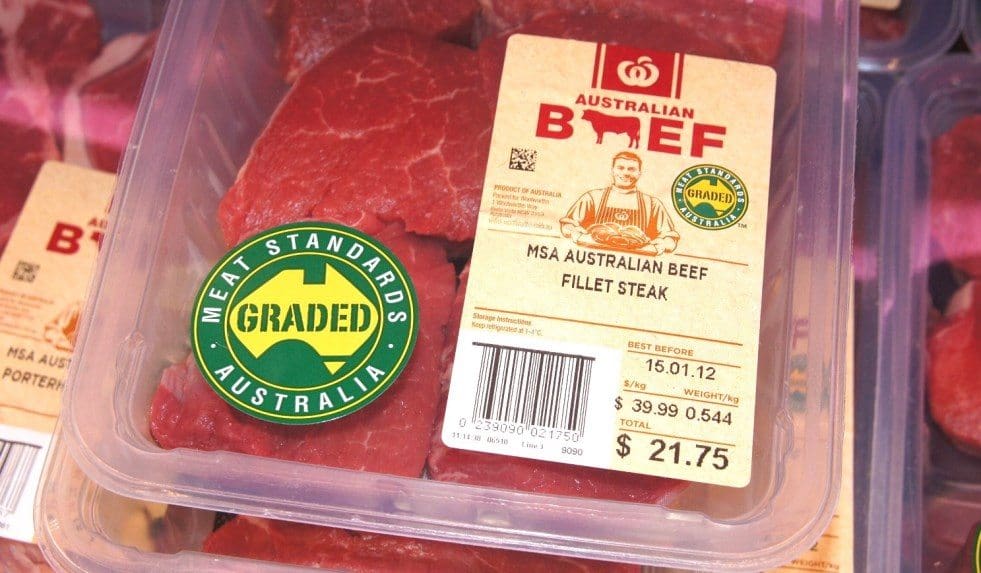 MAP-packaged beef in a Woolworths supermarket in Brisbane

THE red meat industry has been rocked by an unexpected discovery that a popular form of retail meat packaging appears to have a serious negative impact on tenderness performance in both beef and lamb.

Modified Atmosphere Packaging (MAP) has been a popular and growing packaging option in the supermarket retail sector over the past ten years or more.

A recent Meat Standards Australia-backed trial unearthed startling data suggesting that typical MAP-packed beef products at nine days sacrifice 12 MSA tenderness index points. The effect was identical across three cuts tested in the trial – tenderloins, striploins and rumps – and was consistent across different vacuum-packaged ageing periods prior to placement in the retail packaging.

To put the significance of that 12-point tenderness impact in perspective, the current MSA pathways process applies a five-point tenderness deduction on beef treated with hormonal growth promotants. It suggests that MAP packaging, at nine days, has more than twice the negative impact on tenderness that an HGP implant does.

It has already been suggested that the result means some MAP-packed MSA-labelled beef items in retail shelves may in fact be below the MSA tenderness thresholds (46 points), when consumed by customers at nine days or more.

In essence, the research findings suggest that:

Evidence given to Beef Central this week suggests the results have completely blind-sided major red meat supply chain stakeholders. One spokesman for a national supermarket retail chain said his supply chain team ‘nearly fell off their chairs’ when first briefed on the findings.

Both Coles and Woolworths appear wary of the results at this stage, saying more trial work needs to be done, on a broader range of product, before broad conclusions are made (see today’s separate item on retailer feedback).

Firstly, a quick lesson on MAP.

Modified Atmosphere Packaging is used mostly in supermarket retail operations in Australia and overseas. Both Coles and Woolworths are big users, as are Aldi, IGA and numerous second-tier regional retailers. Coles and Woolworths alone account for close to two thirds of all domestic retail beef sales in Australia, meaning the potential affect, if it is accurate, is extremely widespread. 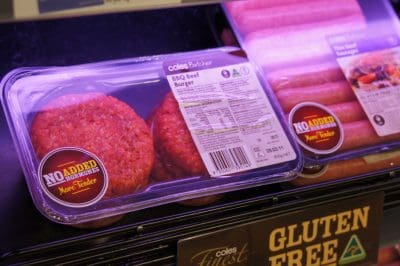 The primary reason for using MAP is in extended shelf-life out to 8-10 days in chilled form, allowing retail supply chains to centrally-package product and distribute out to outlying retail sites. Independent retail butchers rarely use MAP, because extended shelf-life is not an issue in fresh-cut product prepared on-site.

Hundreds of millions of dollars has been invested in MAP packing lines across Australia over the past decade.

Many readers will be familiar with MAP packs of red meat on retail shelves like those pictured here – using a deeper tray and a tightly-stretched film – under which is injected a combination of inert gasses to eliminate pathogen growth and lengthen shelf-life. A conventional cling-film over-wrap tray has a shelf-life of just 2-3 days.

Discovery made by ‘accident’

The recent discovery of the linkage between toughness and MAP packaging was made almost by accident, having emerged from an MSA consumer study which was looking specifically at meat colour issues.

As part of that work, three different retail packaging methods (vacuum skin-pack (VSP), MAP and conventional over-wrap tray) were used for product samples, to gauge consumer responses to meat colour in different packaging forms. Instead, the MSA sensory taste panel work exposed the dramatic negative impact on tenderness from MAP at nine days, as described above. The other packaging forms showed a no negative response.

MLA’s general manager for producer consultation and adoption, Michael Crowley, whose role includes oversight of the MSA program, told Beef Central that it was “just surfacing now that this (MAP packaging) is an issue in eating quality.”

“We’re still learning about the extent of the impact, what’s causing it, and the possible solutions,” he said.

One of the next steps in research will be to determine whether there are alternate combinations of inert gases that can be used in the MAP pack, that may reduce or eliminate the toughening effect.

The most common gas flush used in MAP-packaged beef and lamb is 80 percent oxygen, 20pc carbon dioxide. One of the early responses to the research findings is looking at other inert gasses that may moderate or eliminate the toughening effect, such as nitrogen. One meat science group overseas has proposed a blend of 40pc nitrogen, 30pc oxygen and 30pc CO2, which may somewhat overcome the problem.

“But there are questions surrounding that from a retailing perspective, especially surrounding shelf-life, colour stability and other factors important to consumers,” Mr Crowley said.

“The other part of the work will be to absolutely look at the way the negative impact can be managed through the supply chain. We think that’s all very do-able,” he said.

There had been earlier work overseas suggesting that there might be some negative impact on tenderness from MAP, but the Australian study was the first to attempt to quantify that, in terms of a consumer response.

Mr Crowley said the early interpretation of the findings by meat scientists was that the high-oxygen typically used in MAP packs appears to be having a reversing effect on the ageing process, and is actually protein-binding the meat stored in the pack – stopping the protein degradation process that naturally occurs through ageing.

MLA/MSA is now in the process of finalising a trial design to examine ways to manage the negative impact in MAP-packed beef and lamb. An MSA pathways committee meeting will be held this week, Beef Central was told, to ensure that the trial design is robust, and will look at other ways of mitigating the impact.

The tenderness impact from MAP has so far been tested on three cuts, but Mr Crowley said that “certainly, more work still needs to be done.”

“There will be due process, including industry consultation, through the MSA beef task force, and working with major retail stakeholders who are potentially impacted by all this,” he said.

“We’re keen to explore this a lot further, and better understand what it really means for consumers. We need to determine, for example, whether it is repeatable across different type of livestock, other cuts, and lengths of time spent in MAP atmosphere.”

“This is certainly something that has ‘jumped out’ at us, but we need to really nail this, going forward.”

Mr Crowley said despite the research findings, retail stakeholders and supply chains which had been using MAP packaging for a lengthy period had said they had not received negative feedback on eating quality from consumers.

“Potentially, it could be that the product going into their packs has been of a high-enough quality that it has ‘absorbed’ some of the tenderness impact, and not risked slipping below MSA cut-offs on three star tenderness (46 points dependent on cut, by cook, by days ageing),” he said.

Further investigation was going to take “a little while,” Mr Crowley said, but it was hoped that solutions for industry could be determined over the next six months or so.

“To make it quite clear, we are not proposing any changes at this point to the MSA standards as a result of the findings,” he said.

Research project leader Rod Polkinghorne said there had been some earlier overseas research work that suggested there might be a tenderness issue with MAP packaging, but it had never been quantified.

What’s added to the surprise in the latest research outcome is that some stakeholders, at least, had assumed that extended shelf-life through MAP would in fact enhance eating quality and tenderness, as an extension of the ageing process. In practise, the exact opposite appears to be the case.

Mr Polkinghorne said the project examined three levels of ageing (vacuum-packaging for five days, 14 days and 40 days), prior to the retail packaging phase. The eating quality impact from MAP was identical for each of the ageing regimes.

While the initial research tested tenderness after product had spent nine-days in a MAP pack (not unrealistic, given the time such a product might spend in-store, and then in the home refrigerator in chilled form before consumption), it did not try to determine when the toughening impact occurs.

“At this stage we have no idea whether that 12 point negative impact happens in the first couple of days after packing, the last couple of days, or in a lineal fashion while the product is in the MAP pack,” Mr Polkinghorne said.

“There is always a possibility that at two or three days in the MAP pack, there is little effect. But that of course would largely defeat the purpose of using MAP packaging in the first place, which is about extending shelf-life.”

In the case of Coles supermarkets, the company said it chooses to apply an eight-day shelf-life on its MAP-packed boneless sliced red meat. That means aiming to get it through the production system and stores within five days, giving the customer three days to consume.

Mr Polkinghorne said there was no suggestion at this point that the measured toughening effect was breed related.