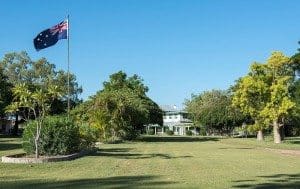 The Fossil Downs homstead and gardens. Click on thumbnail images below article to view more pictures of the station.

She is reported to have paid about $30 million to buy the 394,000ha property, with media reports claiming she beat interest from fellow billionaires Andrew Forrest and Kerry Stokes and foreign investors to secure the station.

The purchase expands Mrs Rinehart’s growing footprint in the cattle industry. Last year her company Hancock Prospecting paid a reported $40 million to buy a 50pc share of Liveringa and Nerrima Stations which cover 450,000ha in the Kimberley. A few months later she entered another joint venture deal worth around $65 million to buy Moola Bulla Station near Halls Creek (394,236ha) and Mt Amhurst (259,201ha), Beefwood Park (205,555ha) and Shamrock Station (178,141ha) in the Kimberley.

That was followed in December last year by the acquisition of Dubbo, NSW, district Wagyu grazing properties Boogadah and Caigan from businessman Paul Saltieri, for a reported $25 million.

Fossil Downs was owned by John and Annette Henwood, and had been held by Mrs Henwood’s family since 1882.

It is situated about 50km north east of the Fitzroy Crossing township and 430km to the live export port of Broome, and was advertised as running 15,000 head of primarily Droughtmaster cattle.

It has frontages to three major rivers with large permanent pools and flood out plains.

A feature of the property is the historic two-storey homestead and expansive gardens.

The property was offered for sale by expressions of interest. That process closed on July 2 and is reported to have attracted eight bidders, including off-shore interest and Andrew Forrest and Kerry Stokes according to a report in The Australian today.