WESTERN Australian businessman John Nicoletti has emerged as a possible contender for one of Chinese-owned Rifa Salutary’s remaining grazing assets being offered for sale, Middlebrook Station.

Rifa is the Australian arm of China’s Zhejiang Rifa Holding Group which has significant investments in the specialist machinery and textiles sectors, aeronautical and aviation, finance and agriculture in China and globally.

This week, Ashleigh Station – the 4391ha large scale cattle finishing and dryland farming enterprise – is due to exchange to a domestic party. Located at Gravesend, 14km west of Warialda and 60km east of Moree, in the renowned Northern Slopes region of NSW, the property has a proven history of turning off 4200 dry cattle utilising winter and summer fodder crops, combined with improved and native pastures.

A large North Asian entity with existing investments in the Australian red meat export supply chain is known to have inspected both properties last year, but no offer was made on either holding.

Cooplacurripa is a renowned large-scale cattle breeding property in the Northern Tablelands region that is expected to raise between $25 million and $30 million.

In fact, it is the largest holding on the eastern fall of the Great Dividing Range.

Comprising three properties known as Cooplacurripa, Number One and the Nowendoc Saleyards, the aggregation is located 40km south east of Nowendoc and 70km north west of Wingham.

The operation benefits from an average annual rainfall of 1036mm, with water entitlements comprising a total of 682ML. Middlebrook, pictured at top of page, is a large-scale cattle breeding and finishing aggregation 36km from Tamworth, on the western fall of the Great Dividing Range.

The 4049ha Middlebrook Park and the 4564ha Kooroon-Keeva are being offered as a whole or as separate assets. Less than 5km apart, they are currently being operated by a single management unit.

Middlebrook is likely to achieve around $50 million.

As part of the inspection process, CBRE’s Danny Thomas recently flew over northern NSW, which he described as ‘wonderfully green’ after recent rain.

“That part of the world looks completely different and it has happened so quickly,” he said. 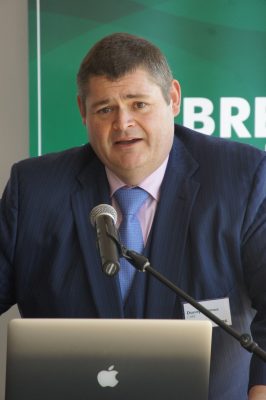 Mr Thomas confirmed that Mr Nicoletti inspected both properties several weeks ago, but said the WA businessman was one of a number of new and interested parties.

“Eight to ten domestic high-net worth farming families have expressed interest in the remaining two Rifa operations. However, we are no closer to securing a deal with Mr Nicoletti or anyone else.”

In September, his John Deere dealership Ag Implements, comprising six dealership locations throughout the WA Wheatbelt, was offered for sale via an international expressions of interest campaign by CBRE Agribusiness.

Interestingly, Mr Thomas told Beef Central there is currently a total absence of corporate enquiry for both Cooplacurripa and Middlebrook stations.

“There has always been an interest in grazing properties from corporates, but the market is thin compared to dryland cropping where much of the institutional money flows. The logical players (such as Paraway Pastoral and Gina Rinehart) who have been active in the market, possibly have their portfolios sorted.”

Despite their absence, Mr Thomas doesn’t believe it will be a quiet year for corporates.

“There is no reason why institutional activity would decline. It is always slow in quarter one (January, February and March). Then, it starts to heat up in quarter two. By quarter four, there’s always a mad rush (as demonstrated last year) to get funds deployed and deals done, within their financial year.”

The sales process for Cooplacurripa and Middlebrook is expected to be in the advanced stages by next month.