LARGE Northern NSW beef processor Bindaree Beef has made its first investment in feedlot ‘bricks and mortar’, coming to terms last week to purchase the 20,000 head Myola feedlot near North Star in the state’s far north.

The deal, which will be officially announced later today, follows discussions which first started between the two parties in November last year. Several other potential buyers were earlier linked with a possible purchase of the Myola feedyard, including ACC, JBS and Teys. 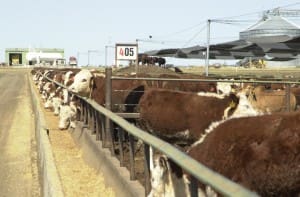 While no sale price has been disclosed, industry intel suggests Myola’s vendors, the Mulligan family, were looking for close to $25 million for the well-established 20,000 head yard, plus about 2500 acres of surrounding farming country.

While there is no indication that this was the exact price paid, if it was a number approaching that figure, it would represent an indicative ‘beast area value’ of about $1000/head. That would be considered ‘competitive’ in the current feedlot property market, but still well below replacement value.

Based on Beef Central’s recent Top 25 Lotfeeders feature, Myola is the nation’s ninth largest lotfeeder, with grainfed cattle turnover last year of about 60,000 head. At full utilisation, turnover capacity is around 80,000 head per annum.

The yard is primarily used at this stage for custom-feeding for outside clients – mostly ‘program’ business, rather than casual spot-feeding, with feeding regimes specifically designed to deliver reliable, quality outcomes.

Myola vendors, James and Lyndon Mulligan and their families, were part of a group of local and investors who built the feedlot in 1993. They later bought out their partners, taking sole ownership.

Myola is geographically well-positioned to align with Bindaree Beef, being 140km or less than a two-hour roadtrain trip from the feedlot to the plant. Bindaree already has about 7000 head of backgrounder cattle on grass country around Goondiwindi, within an hour of Myola on the northern side, in programs which will only grow following the acquisition.

The facility is also nicely located in the ‘Golden Triangle’ farming area between North Star and Croppa Creek, providing good access to grain, cottonseed and other commodities. While Myola is currently built to its licensed capacity, there is ample surrounding land to allow further consideration of yard expansion, Beef Central understands.

Today’s result follows a recent strong sequence of substantial feedlot sales across Eastern Australia, after a lengthy period of little or no transaction activity.

The common thread in all three recent sales examples (ACC’s recent purchase of Opal Creek; Teys Australia’s purchase of Charlton; and this week’s Myola/Bindaree deal), is the motivated purchase by established processor-driven beef supply chains looking to strengthen and  better secure cattle supply – especially in the looming cattle shortage period. In the case of both Opal Creek and Myola, the vendors were privateer family-scale owners, who originally built the yards involved. 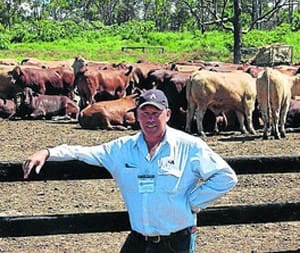 Bindaree’s general manager livestock, Michael Spencer explained that trend when he told Beef Central that “Everything is based on the meat box.”

“We need to better underpin the supply of livestock to the plant, so that we can guarantee the smooth supply of boxed meat to our customers at the other end,” Mr Spencer said.

Five or ten years ago, processors like Bindaree (typical of many others) were spot buyers, more or less at the mercy of the saleyards, procuring whatever livestock they could under prevailing conditions out of the market, and turning it into beef. But increasingly, processor supply chains are becoming more sophisticated, aimed at delivering greater supply regularity and security.

Bindaree has over the past two years developed a suite of branded beef products, both grass and grainfed, making it even more critical to consistently secure lines of suitable cattle to maintain continuity.

The company’s Inverell beef plant in northern NSW has gone from a position some years ago of processing grainfed cattle more or less on an ‘ad hoc’ basis, to a position today where it regularly processes 500 to 1000 grainfeds each week.

The aim with the purchase of Myola was to deliver anywhere from 1500 to 2000 head of additional grainfed cattle each week, depending on the proportion of 70-day grainfed domestics and 100-day export cattle fed, Mr Spencer said.

In addition to that rate of discharge, a similar number of feeder cattle will be required on a weekly basis to re-fill the pens. Bindaree currently has about 20,000 young grass cattle that will now be programmed through the feedlot. The company anticipates buying about 1000 feeder cattle each week out of the normal channels, with the balance from the company’s own pre-purchased grass systems.

While Bindaree’s major Aldi supermarket supply contract is all grassfed branded beef, the company has a growing customer- base for grainfed domestic beef, as well as export.

The feedlot will help grow volumes for the company’s established grainfed brands including Vintage, and Prestige (70 day domestic grainfed).

Mr Spencer said as a result of the Myola purchase, it was anticipated that the proportion of grainfed cattle as a percentage of total kill numbers would grow.

Additionally, outright cattle numbers processed at the plant will also expand. Currently the Inverell facility kills 6000 head per week, but over time, the plan is to re-develop the site to a point where it can process 8000, perhaps 10,000 head each week. That’s most likely to be delivered through a second chain, rather than double shifts.

There appears to be no direct link between the Myola purchase and the announcement just a fortnight ago that Bindaree will merge with marketing company, Sanger Australia, which has sold Bindaree’s offtake in export markets for many years. The two deals are coincidental, Beef Central was told.

Myola’s widely respected and experienced feedlot general manager, Jeff Dight, will remain in his current role under the new ownership, staff were told during a briefing just minutes ago.

A new feedmill (a whopping big Ferrell Ross 24” x 56” unit) was installed about six years ago. Myola has always used steamflaking for grain processing due to its improved digestibility and resultant cattle performance.

The surrounding farming country grows silage and roughage to meet some of the feedlot’s requirements, with the balance sourced from the surrounding area. Cropping internally this year included both an annual summer and winter program. Silage production this year exceeded 8000 tonnes including summer silage of irrigated corn and winter silage of barley and wheat – a recipe which has proven very successful over the past couple of years..

In a statement to be issued by Bindaree Beef Group later this afternoon, Bindaree Beef Group said the acquisition built on BBG’s recent merger with meat sales and marketing company Sanger Australia and its vision of creating a robust supply chain for meat products, leveraging strong communication and partnerships with suppliers at every step.

BBG chairman, John ‘JR’ McDonald said global demand for meat protein was soaring, and Australia had a brilliant opportunity to satisfy this hunger with quality Australian product – while at the same time, restoring Australia’s beef industry to viability.

“BBG is determined to capitalise on this opportunity by earning our stripes as Asia and the world’s butcher; by providing meat products sourced from quality centred operations and delivered efficiently to the world’s markets,” he said.

from paddock to plate and Myola helps delivers this,” Mr McDonald said.

Bindaree had had a strong relationship with Myola in the past and the development would be a real positive for the region and for Australian agriculture, said Lyndon Mulligan, spokesman for the Mulligan family.

What lies ahead for custom-feeding services?

Given that Myola has for many years been one of the largest providers of custom-feeding services in NSW, what happens to that process in future, under Bindaree ownership?

What happens longer term is yet to be clarified, but is sounds like Bindaree itself will progressively occupy more pens itself. If that occurs, there’s no escaping the fact that the sale may take a sizeable chunk of Eastern Australia’s custom-feeding capacity out of the play.

Having said that, there’s been a decline in use of pen space for spec custom-feeding for clients generally over the past few years, with more grainfed cattle locked into dedicated ‘program’ business.

Financially, feedlots built around offering custom feeding services have had two good years in a row – driven by heave demand caused by drought – but longer term, the business model has been erratic, at best, and poorly-performed, at worst.