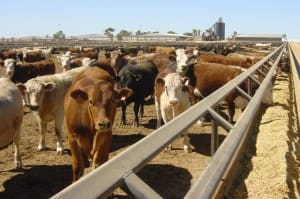 Teys Australia has entered into an agreement to purchase Elders’ 20,000 head Charlton feedlot in  northern Victoria, the Australian stock Exchange was informed this afternoon.

In a brief statement, Elders told the ASX that Charlton feedlot was recorded as an asset held for sale in Elders’ financial statements for the six months to 31 March 2014.

The sale is a further step in Elders’ asset divestment and debt reduction program.

The gross proceeds of the sale of approximately $10.1m will be applied to debt reduction.

The sale gives rise to a profit of approximately $3.95 million (subject to usual post completion adjustments), which, as the asset was held for sale, will not be recorded in Elders’ underlying profit for FY14.

It is anticipated that the sale will complete on or before 28 July 2014.

In this afternoon’s statement, Elders chief executive Mark Allison said the disposal of Charlton, which was not core to Elders’ strategy, marked a further step towards the company’s commitment to simplify the business, concentrate on high-return activities and reduce term debt.