WELCOME to the fortnightly series of articles focusing on red meat R&D, presented by Beef Central and the Australian Meat Processor Corporation. These items highlight a range of projects designed to enhance the efficiency, productivity, product quality and safety of Australian red meat sold into the domestic market and around the world.

All have the ability to help underpin Australia’s unrivalled reputation as the world’s premier export of quality beef, lamb and offal. Links to previous articles in the series appear at the bottom of this page.

The processing sector’s research and development corporation has been providing innovation funding support to MEQ Probe for the past two years, with a view to developing a potentially revolutionary tool for measuring eating quality characteristics in hot carcases for both lamb and beef. 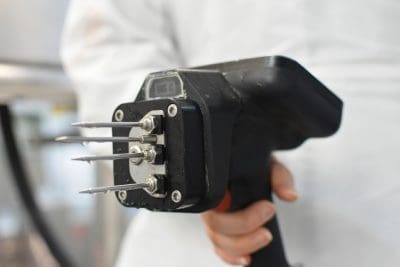 The MEQ probe utilises a blend of physics, chemistry and biology coupled with machine learning to provide meat processors with an objective measure for meat eating quality. The spectral analysis technology takes measurements in a matter of seconds.

“It has the potential to allow processors to optimise the allocation of lamb carcases to customers and markets based on their IMF scores, all before the carcase is broken down. It has enormous potential,” Mr Taylor said.

In a tremendous show of support for the technology, prominent southern NSW lamb processor Gundagai Meat Processors has recently commenced utilising MEQ probe commercially, and it is already opening doors.

“GMP is excited to partner with AMPC and with a company like MEQ Probe because they are so focused and aligned with us on the commercialisation of the product,” GMP’s chief executive officer Will Barton said.

“We are now using the intramuscular fat measurements provided by the MEQ Probe to identify premium lamb for our new Gundagai Lamb brand and unlocking new export markets.” 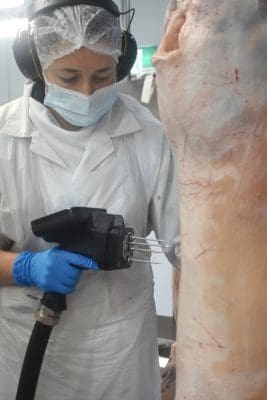 Remo Carbone from MEQ Probe said his company’s partnership with AMPC and Gundagai Meat Processors had been an impactful one.

“AMPC’s team is very focused on driving commercial impact for its members and open to moving quickly to enable that, which is a big deal for start-ups like MEQ Probe,” he said.

Development of the tool for lamb follows work undertaken by MLA’s ALMTech project, which was supported by a Rural R&D for Profit grant and explored various eating quality measurements.

The commercial application of the tool is timely too. The lamb intramuscular fat percentage trait has become part of Australia’s AusMeat language after gaining approval by the Australian Meat Industry Language and Standards Committee.

MEQ Probe is currently working directly with AusMeat to have the tool accredited for measuring IMF in lamb plants.

Following MEQ Probe’s success in lamb, AMPC is now supporting the development of the same measurement tool for measuring marbling in beef carcases, and that project is well underway. It is looking to be accredited in the coming months and will deliver a hot carcase marbling value.

The close partnership between AMPC and MEQ probe is leading to even more innovation opportunities, and AMPC is considering four new in-plant traceability projects that are underpinned by MEQ Probe’s artificial intelligence expertise.

Previous articles in this series: