Speaking at the annual Queensland Rural Press Club breakfast, Mr Strong said the new processing facility would be commissioned in the next month. The establishment of the Darwin plant, as a means of securing processing capacity to become more vertically integrated, was one of six key goals the company was working towards, some of which will be discussed in a separate article later on Beef Central.

“A year ago the board gave final approval for the Darwin plant to proceed – and since then we’ve built and are staffing the $91 million state-of-the-art facility, with the capacity to process almost 1000 head of cattle a day,” Mr Strong told the gathering.

AA Co already had suitable slaughter cattle in place to begin operations, and had made strategic property purchases in the NT, including the two former RM Williams properties, that would allow it to streamline the livestock supply chain to the facility.

“The plant will allow AA Co to capture much more margin in the value chain,” Mr Strong said.

“This facility is a real step-change, not just for AA Co, but for the northern beef industry.”

He said opportunity would exist for producers in the Victoria River District to save $20,000 freight per road train by having access to a plant they could ship to in Darwin.

“It’s also going to mean a much better herd in the north. Producers who would once have hung onto unproductive cattle because it would cost too much to send them to a slaughter market now have a different channel to market,” Mr Strong said.

“It’s also going to have important flow on benefits for other rural businesses, such as mango growers and barramundi farms  – because there are going to be more refrigerated containers coming across the port, and they’re going to find improved cold chain logistics.”

Mr Strong said the Darwin beef processing facility was the start of a new chapter for AA Co.

“We’re now a beef company – we are no longer just a cattle company that sells some beef. And we participate in all parts of the value chain: production, processing, sales and marketing.”

“It’s a strategic change that will help reduce the volatility of exposure to the variable climate in Australia, and the impact that has on domestic cattle prices.”

“By participating in different parts of the value chain, we will increase the stability of our earnings.”

But he stressed that the investment was not a knee-jerk or overnight move – the transition had been going on for several years.

Over the past 12 years, AA Co’s branded beef business had grown from nothing, to a division that now provides more than half of the company’s revenue.

“A year ago about half of our feedlot and backgrounding production was sold as branded beef. In the first quarter of this year, the figure was 85 percent,” Mr Strong said.

Just as important was how and where the company sold that beef.

“The key question for us in developing this strategy was not just about which parts of the supply chain we want to participate in, but at which end of the market we want to operate at,” he said.

“The Asian dining boom is a stunning change in global food consumption. I’m sure that most of the people in this room have heard the statistics: food demand rising by 70pc in the next 30 years, how Australia will need to double food exports and so on.”

“There’s a growing Asian middle class: right now it is about 500 million people, but that will increase to 3.2 billion just 15 years from now. The Asian middle class in 2030 will be five times the entire combined population of Europe and the US today,” Mr Strong said.

“Aspire to be high-end specialist”

While in world terms, Australia was an important part of supplying that food demand, it could not supply all of those people with all of the beef they would demand.

“What we can do is supply the very top of that demand with premium beef. I don’t think that the Australian cattle industry should try to be the food bowl of Asia – rather, we should aspire to be the high-end specialist.”

“At AA Co, we’ve taken the decision that we don’t want to simply be a commodity player. That’s going to be an important part of what we do, especially through the new Darwin plant being commissioned in the next month.”

“But a key point is that the focus needs to be not just on producing quality beef and quality cattle, but on producing profitable beef. Whatever we produce, whichever market we are selling into, we want to be selling the premium product in each category.” 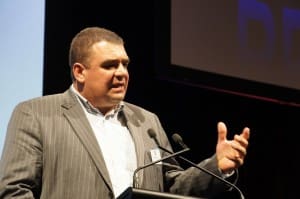 Mr Strong said one of the guiding principles in AA Co’s history over almost 200 years had been profitability and stability, whether that be through accessing the top of the market, or by ensuring that earnings were less affected by the volatility of markets and climate.

“I don’t entirely agree with him. For AA Co, yes, it’s the strategy we’re pursuing and pursuing vigorously. But for others in the beef industry it may be that the commodity space is where they can make the most profit.”

“The challenge is working out where that sweet-spot is, and having the courage to pursue it, even though it may not be where others in the industry think you traditionally belong.”

Mr Strong said as an industry, the beef sector was guilty of being pessimistic.

“And let’s face it – the past few years of drought and market access issues have provided plenty of ammunition.”

“But I want to leave you with this – there is a tremendous opportunity for the beef industry now.”

“New trade agreements are opening opportunities in Japan and Korea, and hopefully China. There are growing markets in other Asian countries such as Vietnam and Malaysia, as well as better trade relationships with traditional partners such as Indonesia.”

“We’ve got a fantastic reputation in those markets that no other country in the world has, coupled with a rich heritage we can use to sell our beef.”

During questiontime, Mr Strong was asked about prospects for investment in processing infrastructure along the east coast, as distinct from Darwin – especially as the company has been getting service kills done at up to four separate export abattoirs in southeast Queensland and northern NSW.

“If there were a number of people who have told us that we are crazy for trying to build an abattoir in Darwin, there were probably twice that number who have told us we would be crazy to invest funds in plants in southern Queensland or NSW,” he said.

“The short answer is no. AA Co is currently one of the largest service-kill users in Australia, using a number of plants in southeast Queensland and northern NSW. We will continue doing that, with good relationships with those service providers now.”

“When we talk about securing our processing capacity, there are two sides to it: one is building the plant in Darwin, and the other is how we build these long-term, secure relationships with service kill providers in the south.”