HAND-HELD scanning devices may have the potential to verify the accuracy of grainfed and grassfed production system claims, which often form a key part of many beef brand programs, recent research has shown.

Speaking during a recent Graham Centre livestock webinar, Cowra, NSW based researcher Bridgette Logan highlighted the potential for the use of raman spectroscopy as a potential tool for objective carcase measurement.

Beef Central first explored the use of ramen spectroscopy in verifying feeding history in cattle in this earlier 2018 article. 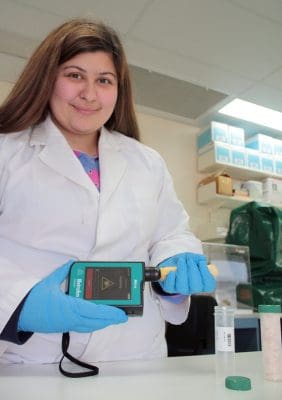 Ms Logan, a PhD student attached to the NSW DPI’s Centre for Red Meat and Sheep Development, said verification of Australian beef production systems was based on audits and was conditional on producers meeting processor-set specifications, which vary for many individual grain and grassfed brands.

Maintaining accountability within the beef supply chain represented a significant cost in the form of auditing, and an even greater potential cost if there was failure in the audit process, she said.

“Consequently, there is a need for an objective method to verify production systems, which can be used to guarantee premium beef products,” Ms Logan said.

Raman Spectroscopy (RS) has been identified as a potential tool for objective carcase measurement as it provides a chemical fingerprint of a sample. RS uses a laser light directed at a sample, to measure the vibration of molecules in the product. This provides a signature spectrum that contains specific information about the chemical bonds making up the sample.

The technology is suited for a variety of applications as it is rapid, non-destructive and available as a portable handheld device, Ms Logan said. RS is widely used in airports for sampling for drugs and explosives, for example.

Her research project aimed to assess the viability of using RS to accurately distinguish between beef production systems.

More than 500 beef carcases from southern Australian suppliers were sampled under the project, from four different production systems:

All four production systems were verified through the supply chain under current standards, as well as direct confirmation with the producers involved.

Raman spectroscopy readings were taken using a hand-held device in three locations on the point-end brisket of each carcase. Spectral analysis was conducted, averaged by carcase and pre-processed to remove signals not related to fat composition.

The graph published below shows that long grainfed carcases (red diamonds) could be clearly distinguished from other production system samples. Modelling showed the ability of RS to split the feeding groups, based solely on the collected scan data. Preliminary results showed accuracies of between 93pc and 95pc for each described group. The largest classification errors were in samples taken between the grassfed (green triangles) and grass supplemented (blue triangles) groups.

By breaking the groups down into two simple groups – ’70 and 100-day grain’ and ‘grass/grass+supplement’ – the accuracy improved further to 96-99pc, with very few samples being misclassified, Ms Logan said.

Developing the model further, based on a more comprehensive database of samples, including various grain and grass feeding ratios, would help improve the development of the method as an accurate tool for identification of production systems, she said.

Ms Logan said the research was intended to be used as a method of authenticating the claims for production of Australian beef products destined for international or domestic markets.

“The technology has been developed into a tool that will be used on carcases when a satisfactory model and library can be established for Australian beef cattle,” she said.

The technology was designed to be used in conjunction with current grading practises. For example when an MSA grader comes through doing their routine assessments for pH and other criteria, they could simply take an RS reading on each carcase at the same time.

“RS technology is able to provide an objective assessment of production systems that can be used to ensure that everyone in the supply chain is accountable,” Ms Logan said.

“Utilising the technology will provide clarity for producers, processors and consumers of the production claims of Australian beef.”