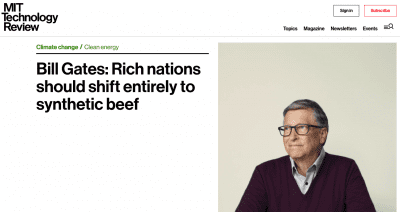 Mr Gates, who has invested in range of ‘synthetic meat’ startups including Impossible Foods, Beyond Meat, Memphis Meats and Hampton Creek Foods, made the comments in an interview promoting his new book ‘How to Avoid a Climate Disaster’.

In the interview with MIT Technology Review, Mr Gates said he did not think the poorest 80 countries in the world would be eating synthetic beef in future.

“I do think all rich countries should move to 100 percent synthetic beef,” he said.

“You can get used to the taste difference, and the claim is they’re going to make it taste even better over time.

“Eventually, that green premium is modest enough that you can sort of change the [behavior of] people or use regulation to totally shift the demand.”

Mr Gates does not claim to be vegetarian and is reported to still enjoy the occasional cheeseburger.

However he has been strong public and financial supporter of plant and cellular based alternatives to meat for several years, stating that farmed animals take a “big toll” on the environment.

Mr Gates said in the MIT interview he wasn’t sure if ‘lab grown’ meat like Memphis Meats will ever be economical, but said plant-based protein companies Impossible Foods and Beyond Meat have a quality and cost road map that makes them “totally competitive”.

In his new book Mr Gates says using regulation to force a shift to synthetic meat is only one of a wide range of government policies that will ultimately be needed to avoid a climate disaster.

In response to his push for the developed world to replace beef with synthetic meat, which appears to have generated largely supportive media coverage around the world, a range of voices have responded on social media by urging Mr Gates to spend more time researching the livestock sector.

Quote from Bill Gates on eating beef/synthetic beef: “…use regulation to totally shift the demand.”https://t.co/vJPHB6MoBF

No thanks and seems like a bad idea on many levels. pic.twitter.com/vPbZF9DAYO

Never take my advice about computer programming or becoming a billionaire.
Also…
Never take @BillGates advice on the food you and your family should eat.

Q: Who is by far the single largest shareholder of Canada National Rail, which makes enormous profits from shipping oil by rail?

It’s ironic that he talks about reducing fossil fuel use but benefits so much from the shipment of the product he publicly condemns.