While female slaughter has been generally low for the past 18 months as a consequence of the dramatic turnaround in seasonal conditions and a determined focus on herd rebuilding, last week’s result was exceptional. 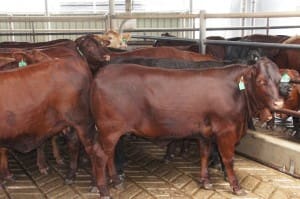 Females (comprising cows and heifers) accounted for just 35.2 percent of the total national slaughter number last week, of 72,477 head. That figure is easily the lowest female percentage since gender data reporting was established back in 2019.

As reported last week, many eastern states beef processors who handle both grain and grassfed cattle have been prioritising grainfeds in recent weeks, to accommodate cattle that have ‘done their time in feedyards, following major disruptions to processing capacity caused by COVID-related illness and  close-contact isolation.

With the quality of the season across much of eastern Australia, grassfed cattle can be more easily pushed back a little in kill rosters.

In major lotfeeding states like Queensland, the female proportion last week was below 26pc, while in NSW, where female slaughter is routinely higher than Queensland, female percentage fell 8-10pc compared with the previous two weeks. Victoria last week fell to 40pc females in its kill, down from 48-53pc in the two weeks prior.

Historically, NSW has always reported higher rates of female kill than Queensland. The most popular theory to explain that is that Queensland tends to feed larger numbers of heavy export grainfed cattle (almost entirely made up of steers), which tends to draw more male feeder cattle north of the border out of NSW.

In contrast, NSW tends to feed a greater proportion (relatively to Queensland) of domestic-weight grainfed cattle, where heifers are much more common.

The combination of the two tends to skew the male:female slaughter ratios in both states, grainfed stakeholders suggest.

Across grassfed slaughter cattle, female numbers are inevitably much higher, because of turnoff of cull breeding cows.

While there is no hard evidence to prove it, MLA senior analyst Stephen Bignell said the grainfed-heavy beef kill was a likely explanation for current extremely low female slaughter numbers.

The NLRS medium cow indicator had been reasonably stable since the start of the year around 350c/kg liveweight, despite volume doubling. However, prices were back about 10pc on where they finished in December (375c). Some might deduce that processor demand for medium cows is somewhat diminished at present, given the priority on grainfed slaughter animals.

In Tuesday’s weekly kill report, major beef processors said they were now working through the backlog of grainfed slaughter cattle ready for processing, with some suggesting delays were now down to only a week or so, as more processing establishments start to lift capacity as staff return to work.

Worth noting in last week’s statistics was the point that in contrast with eastern states, beef kills in Western Australia are currently higher than they were this time last year, suggesting processors in that state have so far escaped the worst of the COVID-related staffing pressures.

The question is, is WA simply deferring its Omicron sickness wave in processing until later, or will it escape the cycle altogether?