Australian beef: Time to let the Ferrari out of the garage

Just when it seemed the war on red meat had stretched the limits of believability comes news that a large US company has informed its staff it won’t be refunding employees for expenses that involve meals with meat.

Provided the 6000 employees of ‘WeWork’ around the world buy plant-based foods and not poultry, pork or red meat while on the clock their expenses will be reimbursed. The company has also banned the serving of meat at events held at its 400 locations around the world.

Issues of ‘nanny-state’ corporate over-reach and rights to personal freedom of choice aside, the move is the latest example  of how anti-meat propaganda from vegan groups and companies selling lab created ‘meat’ are influencing perceptions that farmed livestock are bad for the planet, despite plenty of evidence to the contrary.

Within the last week reports emerged that Air New Zealand and Virgin Atlantic are hitching their brands to the anti-meat movement to boost public perceptions about their own sustainability. Given that aviation has been described as the world’s biggest environmental sin both airlines may be better served focusing on their own emissions rather than what’s on their menus.

Last month Google bowed to the ideology of the tiny vegan minority by removing the ‘egg’ that used to appear in its salad emoji: 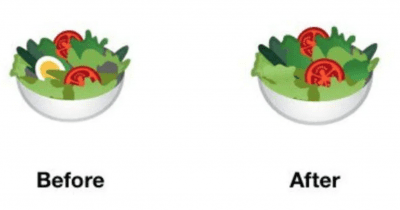 If, rather than simply accepting the anti-meat claims of vested ideological and commercial interests, these companies instead explored the work being done around sustainability in agriculture, they would see that a compelling case exists to embrace products like Australian beef for sustainability reasons.

But her final message was that Australia had to do more to ensure that work was better known and understood around the world.

Being able to measure and demonstrate sustainability progress and what is being done to continually improve is a cost of doing business today, and the sustainability framework and Grazing BMP are critical planks in ensuring the Australian beef industry can demonstrates its sustainability credentials.

But if that work is not being actively and strongly promoted it is a little like having Ferrari but leaving it in the garage.

As touched on in an earlier article (Can Australian agriculture afford not to promote itself more actively?) it is no accident that the biggest companies in Australia are also the biggest advertisers, investing heavily to ensure consumers understand their values and trust their brands.

Australian agriculture has a compelling, credible and powerful story to tell on sustainbility but by not investing to share their story more widely public messaging around beef is being dominated by those who are: vegan groups and fake meat brands.