CATTLE trains have started operating in North Queensland again after delays in moving wagons and a breakdown in negotiations to use infrastructure put the new operators behind schedule.

While Watco East West this week sent trains out of Cloncurry and Clermont, the negotiations to use loading yards, owned by the former contractors Aurizon, are ongoing.

Along with the negotiations, flooding in south-east Qld has also caused delays, with damage to rail line halting wagons travelling up from Watco’s base in Warwick. 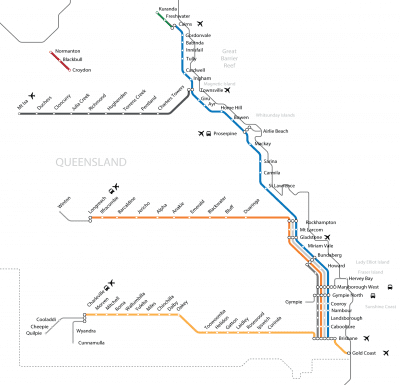 Watco is now running on all three east to west lines. Click to enlarge

Aurizon obtained loading facilities at Julia Creek, Richmond and Hughenden when they were given the contract for Qld’s cattle train network more than 10-years-ago. But over the past two years contracts to run most of the lines have been awarded to Watco.

Padlocks have since been put on the gates at Julia Creek, Richmond and Hughenden, with Aurizon citing “commercial and safety reasons”.

Councils have been trying to buy the facilities off Aurizon, but Beef Central understands Aurizon is not interested in selling the yards. Earlier this year, McKinlay Shire mayor Phillip Curr said council would have to reassess its options.

“If we can’t come to agreement, council will have to look at building a new facility in conjunction with the state government department,” he said.

“Aurizon doesn’t want to do a deal with council and wants to make an agreement with Watco East West and that’s not an option for us.”

Cloncurry is one of the only rail-loading yards on the western end of the Mount Isa to Townsville line to be owned by the council, with Watco using that facility this week. Prior to this week, cattle have been heading to east coast abattoirs on trucks, with Watco reimbursing producers.

Speaking to Beef Central earlier this year, Watco director Chris Hood said the company was not fussed about ownership, it only wanted access.

“We’re in the business of running trains, not owning cattle yards – we just want to have use of the infrastructure needed to run trains. I am confident we will resolve this and there are alternatives if we can’t,” he said.