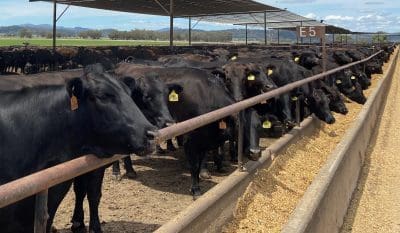 While the latest record was predominately driven by Queensland’s Roma Saleyards, similar prices were seen at saleyards across the country. In the deep south, at this week’s Powranna sale in Tasmania, National Livestock Reporting Service market reporter Richard Bailey described it as Powranna’s dearest sale ever – with feeder steers 330-400kg averaging 580c/kg. Earlier this week, 360-500kg feeder steers at Ballarat averaged 592c/kg.

Like the benchmark Eastern Young Cattle Indicator, the Feeder Steer Indicator is a seven-day rolling average of saleyard prices. 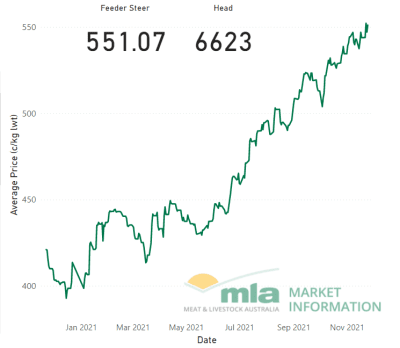 “Most of the feeders have been coming through Roma, Dalby, Dubbo and Wagga Wagga. Last week Dalby was the big driver,” Mr Bignell said

“This week the dynamic changed and Roma went nuts, with feeder steers making a 10 percent premium to the national indicator.

“Numbers have come down slightly, so there has been a bit of a tightening of supply which is helping push prices up.”

In general, the number of Australian cattle on feed has dropped a little in the past quarter while still staying above one million head.

Mr Bignell said the high demand from lotfeeders was preserving confidence in the restocker market, which has also been surging in the last week.

“With feeder steers going up, restockers know they have a market to sell into, so they’re not afraid to pay for the lighter cattle,” he said.

“Restocker demand has moved north throughout the year as the rebuild happens and we go into the third year of good conditions in the south.” 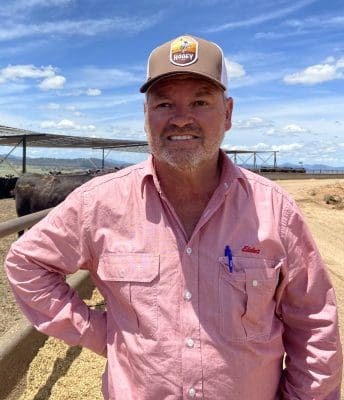 Smaller cattle suited to restockers have been in extremely small numbers at NSW saleyards, with many producers still heading north to find bigger runs of cattle.

“We’ve had such a big season and a lot of producers are wanting to make their cattle heavier because they can’t replace them with lighter cattle,” Mr Talbot said.

“There’s still quite a bit of export and domestic demand for finished product, which has kept lotfeeders like us pushing hard for cattle to fill contracts.” James Maclean from Qld-based Allied Beef said an early start to the wet season in the sunshine state was limiting supply of cattle compared to other years.

“The normal peak of the Qld market is late November and that is reflecting the tighter cattle supply going into the growing season. This year is exaggerated because of lower herd numbers,” Mr Maclean said.

“NSW had the early break last year, whereas most of QLD was still significantly affected by drought this time last year.”

Mr Maclean said British and British cross feeder steers in southern Queensland were making about 530c to 575c this week, with Angus steers making between 585c and 610c. He said cattle with high Bos Indicus content were seeing about a 20pc discount.

“Despite what appear to be tight margins for lotfeeders, the processing sector is looking towards the supplementary-fed supply chain to source cattle to fill their requirements,” he said.