NUMBERS of cattle on feed have reduced across all states in the past three months, with the industry’s latest quarterly survey showing a 54,559 head decline. 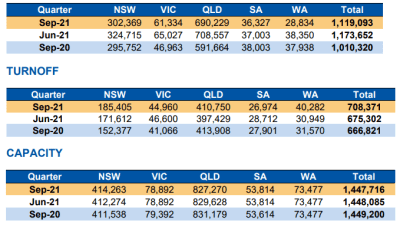 The data compiled by the Australian Lot Feeders Association and the Meat & Livestock Australia released this morning showed the total remained above one million head, with a total of 1.119m for the September quarter.

Despite the numbers on feed falling on a quarter-by-quarter basis, there were 108,773 more cattle on feed nationally than there were in the same period last year.

With a large buy up earlier in the year, the turn off rate for rate for lotfeeders has increased, which ALFA president Barb Madden said was a sign of the industry’s importance.

Ms Madden said it was pleasing to see numbers of cattle on feed remain above 1 million and above last year’s level.

“Feedlots are operating at a utilisation rate above 75pc. This reinforces that demand for grain fed beef remains steady despite herd rebuilding activity and an environment of tight cattle supply,” she said.

“National utilisation is 7pc higher than September 2020 levels, demonstrating confidence in the production system in the face of continued tightening of supply.”

“There are 10.8pc more cattle on feed than there were at the same time last year, with Queensland and Victoria experiencing growth of 17pc and 31pc respectively.

“The industry is in a great position – OTH prices are at record levels, numbers on feed up for the year, and international demand remains strong.”