RESTOCKERS from a wide area of eastern Australia gained the upper hand in a firm to stronger demand for store cattle at Ballarat on Friday. 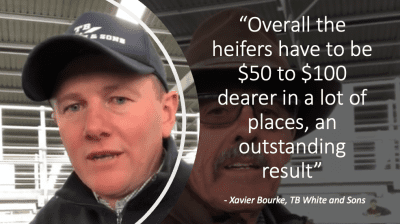 Competing for a larger supply of 4133 (1400 more), the yarding contained the first drafts of this year southern-bred, autumn-drop weaners, along with an improved and greater of grown cattle.

Restockers from Gippsland, the northeast and southwest of Victoria, South Australia and southern, central and northern parts NSW supported the market pushing restocker lines in particular to new highs while feeder inquiry was noticeably more cautious and less represented.

“They’ve been absent from Ballarat sales for a number of months and there was a good number of heavy steers penned over 500kg to suit their job”.

Well-bred young cattle penned in large lines he said made exceptional money, with several 2nd-draft pen of steers, and in some case their lighter heifer sisters making as much per head than their heavier 1st-draft steer brothers.

But where the market gained momentum and found a new level, he said was in the weaner section where a fresh supply of younger weaner cattle came forward.

Many of these cattle were only 8-9 months of age Mr McConachy said.

“They have a long way to ago in their journey to completion but the buyers seemed happy to pay the money and the breeders are willing to accept the money that’s being offered”.

In his post-sale summary of the market with Beef Central, Xavier Bourke, TB White & Sons, said selected heifer prices could easily been “a couple of hundred dollars dearer”.

Two pens to achieve exceptional results according to Mr Bourke were a yard of two-year-old Angus 575kg, from the Wylie family, Mt Mercer trading as Daelreom Angus, that made $2700, and a yard of 56 Cherrymount Angus weaners, 350kg, from Mick and Dawn Ernest, Streatham that sold at $2500.

Mr Bourke said that the grazier demand for heifers to join was too strong for the feedlot demand especially on the drafts of well-bred young females.

After having secured sales for feeder steers of a similar weight that averaged $6/kg in Ballarat’s month-earlier October sale, Colac vendor, Laravale, sold another two drafts of Angus, 472kg and 457kg, that made at $2750 (583c/kg) and $2660 (582c/kg) respectively.

As mentioned, the November market featured initial drafts of this year’s southern-bred autumn-drop weaners most of which were aged merely 8 to 10 months.

While sales of heifers were dominated by grazier interests the quality of the overall female yarding fell away sharply compared to the steer penning.

Nonetheless competition was full of purpose for the better bred and larger lines with renowned breeder lots attracting the fiercest contest.

The November display of breeding females was once again thinly veiled.

The standout sale was a line of 26 Angus cows, with 8–12-week-old Angus calves at foot that made $4040 for F&G Richardson and Sons.

The line was re-depastured to Franc-blood Angus bulls from October 15 while, at $3980 per outfit, a pen of 10 Redwoods, Woodhouse Santa/Shorthorn cows, aged 8 years, was sold with two-month-old Shorthorn calves standing at foot.