THERE have been some spectacular declines in feeder cattle prices across eastern Australia since the start of November, with some indications suggesting there is more of that to come when the cattle business gets back to work next year.

Paddock sales of flatback heavy feeders in Queensland were quoted to Beef Central by trade participants yesterday at 470-480c/kg, but described as ‘under some pressure.’ 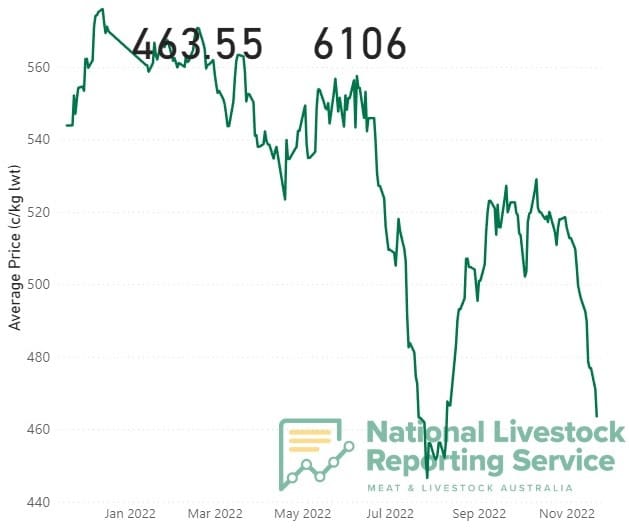 Clicxk on image for a larger view

After the mini collapse in prices back in July/August when the market was spooked over FMD/LSD disease risk (see references below), there was a rally in paddock-based feeder prices to around 505-510c.  But that high-point started to deteriorate around three or four weeks ago. Since then, the market has dropped at least 40-50c/kg, and in places, more.

The NLRS feeder steer graph published here, based on saleyards transactions of feeder weight steers, graphically reflects the recent collapse in prices. It has dropped from 518c/kg liveweight at the end of October to 463.5c yesterday – a 55c/kg adjustment or almost 11pc in three weeks. On a typical 400kg feeder steer, that represents a payout $220 less in a little over three weeks.

For reader interest, the previous, brief ‘chasm’ illustrated on the graph back in July-August was caused by growing industry jitters around the impact of any FMD/LSD incursion, following developments in Indonesia. That wariness quickly dissipated as time went on.

The current price decline for feeders is being driven by a number of factors, supply chain managers have told Beef Central:

Also reflecting the recent young cattle price trend, the Eastern Young Cattle Indicator has fallen dramatically over the past week, reaching 948c/kg (expressed in carcase weight equivalent) yesterday, losing 68c/kg over the past ten days, and 84c/kg below this time last month. Yearling steers made up more than 56pc of all EYCI eligible cattle sold over the past week. Click here to view Beef Central’s home-page Industry Dashboard EYCI graph.

In the physical market, feeder steers +400kg sold at Roma store sale yesterday averaged 460c/kg liveweight, down another 11c/kg on top of a falling market the previous week – albeit both very large offerings.

Looking ahead, there is clear evidence that the market thinks there is further downside in Australian feeder steer prices into 2023.

The Swaps graph shows next month’s December 2022 delivery cattle (the average between bids and offers) at 468c/kg liveweight, declining to 455c during the first quarter next year, and bottoming out at 435c/kg* between May-July (*this figure amended – it originally said 445c), before edging higher to 440c in August 2023.

That trend follows the normal season pattern over winter and into early spring, unlike this atypical 2022 year.

The Swaps price indications next year suggests the market does not expect feeder steer prices to ‘completely collapse into the 3’s,’ Beef Central was told, but there was likely to be an ongoing level of support through next year driven by favourable seasonal conditions and money in the bank from trading cattle over the past 12 months.

“The other bogey is, when is it going to rain in the US, and when will their cattle cycle turn?” one follower of the Swaps market said.

Some stakeholders believe that forecast low-point in the Swaps trading next year may be being oversold, however, based on comparisons with US live cattle prices. US live prices have skyrocketed about 20pc over the past two months, now back above the 2015 prices.

This many hep support Australian feeder prices early next year, some anticipate. Some see the basis feeder figure for Australia next year at around 460c/kg, not far from where the market currently sits – but certainly higher than what the StoneX trading model suggests.

“Look at what’s happening in the US in terms of forecast tightening in supply due to drought  – Australian feeder prices are going to be the beneficiaries of that next year,” one contact who sits on the ‘optimists’ side over next year’s prices said yesterday.

“The US disaster is going to help support our feeder prices in the short to medium term,” he said.

Another factor supporting a less drastic drop in feeder prices next year – especially in Queensland where half the nation’s cattle are located – is the prospect of more cattle breeders who have been inclined to sell their young cattle as feeder in recent years, electing to hold-on to those steers and heifers and finish them on abundant grass.

Working against that, there is still a big disconnect between feeder and backgrounder cattle and finished cattle prices in the Australian market. As Beef Central reported yesterday, there’s been a big decline in slaughter cattle prices over the past two weeks (click here to view).

The enormous 140,000 head drop in cattle on feed across Australia in the September quarter clearly reflected the lack of profitability in lotfeeding, due to high feeder prices and high grain prices, as well as challenging export meat trading conditions, stakeholders said yesterday. Asked whether numbers on feed were now likely to rise again, due to softer feeder cattle and grain prices (see below), several contacts said it was likely.

“The Angus feeder steer price, for example, has dropped even more extremely,” one contact said. “It’s been hammered, from around 580c/kg earlier to 500-520c or thereabouts today – and that’s dropped in a matter of weeks,” he said.

“The Angus premium for periods this year over generic flatbacks really blew-out, to as much as 70-80c/kg liveweight at times. Historically that premium used to be 20-30c, so it may have become overcooked, due to some fairly specific demand coming from customers in parts of Asia for Angus brand program beef. But that has since softened, as demand has changed, and customers in China and elsewhere have gone cold.”

With a little new-season harvest pressure now starting to take effect in the market, feedgrain prices have softened, after a rally last month when short supply due to the lack of harvest because of wet weather hit the market. Some markets rose $30-$40/t briefly on that earlier demand pressure.

One source yesterday suggested that was now coming off, with barley delivered Downs yesterday around $365/t, down from $405 only three weeks ago. Wheat has seen a similar price fall, but $10-$15 above barley depending on specific feedlot requirements.