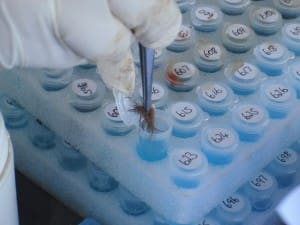 Cargill has told Beef Central it will not actively defend a patent appeal case in the Federal Court regarding the bovine genome in Australia.

Cargill Inc and another US-based company, Branhaven LLC, are listed as the two owners of an application approved by IP Australia earlier this year to patent a method of using 2510 genetic markers related to the bovine genome in Australia.

Specifically, the claims of the application are, according to IP Australia, “to a method of using 2510 specific genetic markers which correlate with traits of agronomic or commercial significance in cattle. This method requires one of the 2,510 genetic markers to be located in a gene at a specific location in combination with two other genes having another marker”.

Meat & Livestock and Dairy Australia opposed the initial patent application, describing it as a bid to patent “general discoveries of nature” in cattle research.

MLA fears the patent is so broad it could affect genomic selection for all cattle production traits, and could be used to force the Australian cattle industry to pay hefty royalties to use most DNA-associated genetic tests in future.

It also believes the costs could discourage or hamper future genetic research projects in Australia.

MLA and Dairy Australia opposed the patent application on the grounds of ‘Inventive Step’ (i.e. alleging that the ‘invention’ being patented was not sufficiently inventive or obvious); insufficient description, lack of clarity and patentability.

However, their opposition was dismissed by IP Australia after it considering the evidence and conducted a hearing.

Aa delegate of the IP Australia Commissioner ruled on May 6, 2016, that MLA and Dairy Australia’s opposition had been unsuccessful on all grounds, other than ‘clarity’.

“The delegate found a lack of clarity in respect of claim 13 and allowed the applicants an opportunity to amend the application, removing any possible claim to a genetic sequence,” IP Australia told Beef Central in a statement.

MLA has since confirmed it will now challenge the patent decision in the Federal Court.

The issue is also now likely to attract the full scrutiny of a senate inquiry.

Senate Rural and Regional Affairs and Transport committee chair Senator Barry O’Sullivan told Beef Central last week he intends on calling a senate inquiry to whether naturally occurring genes can or should be patented in Australia.

Beef Central understands a notice of motion to launch the inquiry will be presented to the Senate during this week’s sitting of Parliament.

Despite its involvement as a co-owner of the application, Cargill has indicated to Beef Central that it is working with both MLA and Branhaven LLC to resolve the matter, and “will not be actively defending the appeal in the Federal Court”.

Cargill Australia corporate affairs manager Peter McBride said the company was disappointed the situation had resulted in a legal dispute.

He said Cargill did not have full or independent ownership of the patent application, but rather owned it jointly with Branhaven LLC.

Beef Central understands the original patent application was filed by Cargill and its then partner, biotechnology company Metamorphix Inc.

“Joint ownership means that Cargill cannot act independently in relation to the patent application (including in relation to any litigation),” Mr McBride said in a statement provided to Beef Central.

“Cargill also cannot licence or withdraw the patent application without the consent of Branhaven.

“MLA has commenced the appeal in the Federal Court and Cargill is a Respondent. As co-owners of the patent application Cargill’s name appears on the proceedings.

“However, while Cargill is listed as the first Respondent in the Federal Court case, it should be noted that Cargill is not actively defending the appeal and it is a matter of public record that Cargill filled a Submitting Notice on 25 October 2016.

“Cargill cannot otherwise comment on matters that are before the court.

“Cargill will continue to work with all interested parties to seek a resolution to this matter.”

In a statement issued on Thursday MLA noted that Cargill Australia “is not a party to these proceedings” and that, through their corporate affairs office, “Cargill Australia have been working very constructively with MLA to address our issues around the patent”.

It is also Beef Central’s clear understanding that this matter has no association or connection to Teys Australia, which is a JV partner of Cargill Australia.

IP Australia told Beef Central that its examination of patent applications are conducted by a patent examiner in accordance with the requirements of the Patents Act 1990.

“Examination reports and opposition hearing decisions are subjected to IP Australia’s quality review system to ensure the high quality of each report and decision,” it said.

However it could not comment on the Cargill/Branhaven patent application as the matter was now before the Federal Court.