Senate inquiry to probe if livestock genetics should be patented 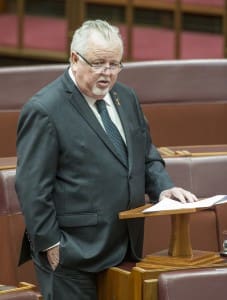 A Senate Inquiry to be introduced to federal parliament next week will consider whether a national interest test should apply to applications to patent livestock genetics.

As reported by Beef Central yesterday, MLA will appeal in the Federal Court a decision by the Australian Patent Office to grant an Australian patent to Cargill USA/Branhaven LLC.

In an email to members last night, MLA Managing Director Richard Norton said the application was an attempt to patent “general discoveries of nature” in cattle research.

Mr Norton said this patent had the potential to impact the genomic selection of all cattle production traits leading to significant scientific and financial implications for industry’s research agencies and the Australian beef industry more generally.

The focus of the inquiry will be on whether any due diligence was undertaken by the Australian Patents Office prior to granting the Cargill USA/ Branhaven application.

Senator O’Sullivan said while he was supportive of MLA’s decision to challenge the patent application in the Federal Court, it was essential the decision-making processes within the Australian Patent Office are also examined to understand why the application was granted at all.

“I am extremely uncomfortable with the idea that a foreign company can effectively claim ownership over naturally-occurring genetics in this country,” Senator O’Sullivan said.

“Frankly, I find it very worrying the Australian Patents Office has seen fit to allow the Cargill USA/Branhaven application to proceed to grant and I want them to front up before our RRAT committee and explain themselves.

“The Australian Patents Office must surely be aware that awarding this patent could have massive implications for the cost of research in our beef sector.

“Economic growth across all rural industry is reliant on a strong research and development component.

“Genetics are the vehicle that beef producers are able to develop the product that consumers demand.

“We know through programs such as a National Livestock Genetics Consortium that there are significant industry-government partnerships to double the level of genetic gain over the next decade.

“These efforts can all be put in jeopardy through granting a patent that is not in the national interest.

“I want this inquiry to look at the idea of whether a national interest test should be mandated before the patent office makes any rulings that can have such deep implications for an industry as vital as the Australian beef sector.”

Senator O’Sullivan said he believed most producers across the nation would find it hard to believe that an overseas corporation could claim ownership over the naturally occurring genetic make-up of a cow.

“The genes that Cargill USA/ Branhaven are seeking to patent have been known to us for many years.

“Nothing that has been presented to me demonstrates that Cargill USA and Branhaven have any unique claim that justifies this patent decision.

“Simply isolating the livestock genes and filling in an application form should not be enough to jeopardise millions and millions of dollars in R&D work across the nation.

“We already know that the US Supreme Court found in 2013 that a naturally occurring DNA segment in a person that is a product of nature is not patent eligible merely because it has been isolated.

“We need to bring back a little common sense into this debate to make sure that naturally-occurring genes, which should be the property of everyone, do not become the ownership of a handful of foreign businesses.”