Predictions of higher price premiums back to producers in future for higher marbling emerged in a high level panel session at the Angus Through the Ages 100 year celebration conference in Albury on Thursday.

In a question to the panel beef consultant Dick Whale noted stunning changes that have occurred in the number of cattle achieving higher quality grades in the United States beef industry in recent years.

From 2010 to 2017 Mr Whale said the number of carcases reaching the highest quality grade, USDA Prime, had grown by a remarkable 93 percent. Close to 10pc of all carcases were now achieving the grade, up from 3-4pc several years ago. (Beef Central readers may recall Steve Kay wrote about this very phenomenon in his monthly column back in February back in February)

“Now the reason it has dropped is because people have been paid by the processor for the quality they’re producing and a prime carcase has been worth $550 per carcase above a one-marble score carcase,” Mr Whale said.

“That is our real problem in this country – we don’t get paid for what we produce from the processor sector and from the end user.” 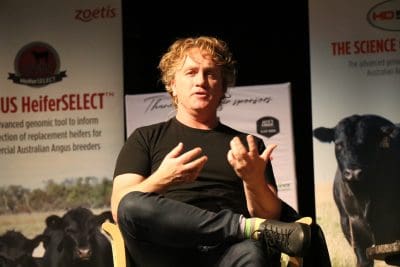 Adrian Richardson expressed surprised that price premiums for higher marbling product were not finding their way back to producers.

“If it has got more marbling in it, and (JBS brand) Little Joe* is a great example of a product that I will pay 30-40pc more because it has got that marble score 4,  it has grassfed.

* Editor’s note: Adrian Richardson’s comment above referencing JBS Great Southern was simply to illustrate that he was prepared to pay more for a more highly-marbled product. Great Southern is, in fact, one of the examples of an Australian beef brand program where significant premiums are paid for marbling performance (see this earlier Beef Central article). Panel comment regarding the lack of premiums for marbling were directed primarily at generic grassfed and 100-day grainfed programs, rather than specific brands.

Zoetis’ Kent Anderson said a combination of factors had contributed to the spectacular growth in marbling in the US cattle herd. 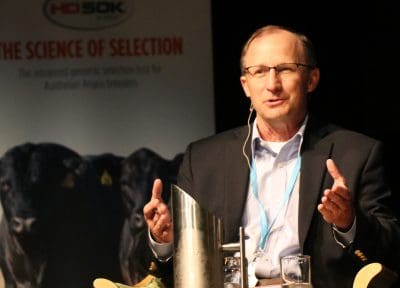 These included breeders selecting for it and driving genetic change, the increase in the composition of Angus genetics in the national US cow herd, and also non-genetic factors such as price grids being driven by a combination of yield measurements and quality grade, based on marbling.

“Everyone is aiming towards those grids, trying to build genetically designed cattle that hits the sweet spot of the grids and commands premiums,” Mr Anderson said.

Mr Anderson said most carcase data US producers get from beef plants now comes from a camera.

“There is a still a USDA grader and an inspector there but the camera is used to very objectively evaluate both marbling as well as fat thickness and muscularity and then compute the grade, and producers can not only get the data but he images of the carcase themselves if they make arrangements ahead of time.

“I think that is also one of the reasons we have cattle grading better than ever before, there is that much more objective and fairness in it rather than a subjective human element.

“Graders are still important and they can override the camera if human judgement dictates so, but I really like the data.”

MLA managing director Jason Strong said the challenge to create true value based marketing has been “an unsolved effort” in the industry for 30 years.

“A big contributor to that is the fragmentation in the industry, in that we don’t have solid connections across the components of the supply chain,” he said.

He noted that some individual brand programs do indeed reward producers for higher marbling outcomes but the industry as a whole was still a long way from achieving a true value based marketing system.

“Only yesterday at a board meeting somebody was pointing out the nuance between a supply chain and a value chain,” Mr Strong said.

“And people talk about a value chain in our sector but they’re just being cute because it is really not, we have a supply chain that is driven very much by supply and demand from when (a seedstock producer) makes a breeding decision through to when a steak goes on a plate in a restaurant, there’s 8 or 10 sets of trade that are generally made through that supply chain.

“There’s only a couple of them that consistently have any interest in the consumer from a decision making point of view and that is a fundamental problem for us as far as how we create and capture value when we have such a significant disconnect at most of the decision points from the consumer where the value is ultimately created.”

Sam White from Bald Blair Angus suggested one barrier inhibiting progress towards more widespread value based marketing was the changing ownership of animals as they moved through the chain.

“One of the challenges is that title passes on an animal when it goes out of our gate as a commercial producer and that has unbelievable ramifications in terms of what reward comes back to the person who has bred a pretty damn hot animal,” he said.

“Businesses are about relationships, the next fellow in the chain is buying your clients steers,  they have a lot of information and the challenge of course is to get that feedback back to them and for them to get rewarded for it.”

As a part of a black Angus supply chain involving Rangers Valley Feedlot and Mr Puharich’s Vic’s Meat, Mr White said Bald Blair was getting rewarded for quality production and was grateful for the timely information it received back from the consumer end.

“The challenge of all of this is making sure we get that timely information in a way going forward that allows the commercial sector to make decisions on the bull they’re going to buy.”

In response to a producer question about whether seedstock producers who focus on marbling will be rewarded in years to come over those that don’t, Anthony Puharich said the market wants marbling.

“They see it as a true indicator of quality and eating quality.

“If you don’t change with the market you are at risk of being the Nokia, the Kodak of the meat industry, and I think that is a bigger concern.”

Asked if there was much engagement between chefs and seedstock producers in any significant way, chef Adrian Richardson said the answer was no, and at least not yet.

He said he welcomed the opportunity to talk to the industry at the Angus conference.

“An environment like this is great, you are listening to what I am talking about when I’ve purchased meat and what I am looking for and that goes back to you guys and you guys are thinking about okay that is what they want, let’s work on that sort of stuff, let’s work on getting really good quality, which is what we’re after. 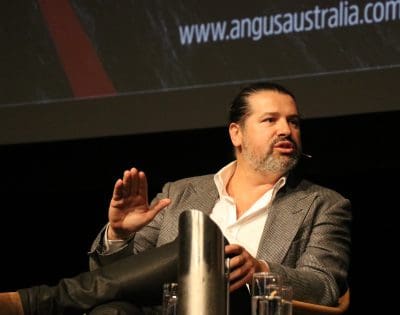 Anthony Puharich said there was a need for greater engagement from all sectors throughout the chain.

He also believed there was a strong need for the industry to showcase the work of Australian cattle producers.

“We don’t celebrate what these guys do enough, it is not talked about, the message doesn’t get out there, at the end of the day this country has the hardest working, the best the most innovative producers and farmers in the world, yet who tends to get the limelight and the bulk of the limelight are people like me, people like Adrian, other chefs, the other end of the chain.”

He said he would like to see MLA advertisements promoting red meat around big events such as Australia Day focus more on the producers and the growers.

“Without these guys we have nothing.”