CATTLE numbers on feed in Australia could fall by as much as 30 percent by June this year, independent meat and livestock analyst and regular Beef Central contributor Simon Quilty told a webinar audience last week.

Mr Quilty forecasts numbers on feed will bottom-out at around 867,000 head in the June quarter this year – a drop of more than 370,000 head or 30 percent from the record-high, drought-fuelled numbers recorded in the December quarter.

As this graph shows, Mr Quilty expects numbers for the Mach quarter to be roughly between the two, at around 990,000 head. Official results from the quarterly MLA/ALFA feedlot industry survey for the March quarter are expected to be released in coming days.

Some stakeholders believe the March quarter figures, when they arrive, may not accurately reflect the current state of affairs in the industry, because the real damage caused by the global shut-down of the food service sector (described in more detail below) did not really start to take effect until April.

And with rain relief across eastern Australia not taking hold until the second half of February, many feedlots had not yet started to reduce numbers by the time the survey was conducted, some stakeholders said this week.

If Mr Quilty’s dramatic forecasts prove correct, the decline would rival the collapse in numbers-on-feed witnessed during the Global Financial Crisis period back in 2007-08.

Global pressures brought on by COVID-19 have been blamed for the reductions.

“We have seen placements in feedlots (in both Australia and the US) falling dramatically over the last six to eight weeks, because of the collapse in demand for middle-cuts seen around the world due to the closure of the food service sector due to COVID-19,” Mr Quilty told last week’s NSW Local Land Services webinar.

“All those better cuts that traditionally go into restaurants, hotels, cafes, conferences, the cruise line industry and countless other food service segments have gone down in value,” he said.

“Expensive animals like 150-300 day grainfed Angus and Wagyu are even more reliant on the food service sector than other beef descriptions,” Mr Quilty said.

“All those cuts have dramatically fallen in value from those high-end animals, because they rely so heavily on the food service sector that has gone into shut-down for the past two months.”

As a result, feedlots had had to destock, and take animals out of yards, because they had no place to sell those higher quality grainfed cuts, at realistic prices.

See this earlier summary of Mr Quilty’s comments from last week’s webinar for detailed explanations about the COVID impact on the beef trade.

Ironically, the United States feedlot industry was doing ‘the same thing at the same time,’ and US feedlot placements for the month of March were the lowest recorded since records started in 1994, Mr Quilty said. Congestion caused by reductions in meat processing capacity due to COVID related illness among processing staff had also contributed to the US decline in placements.

He used this slide to show it was a similar story, in the US feedlot industry, where there had been a dramatic fall in placements in feedlots in March and April. 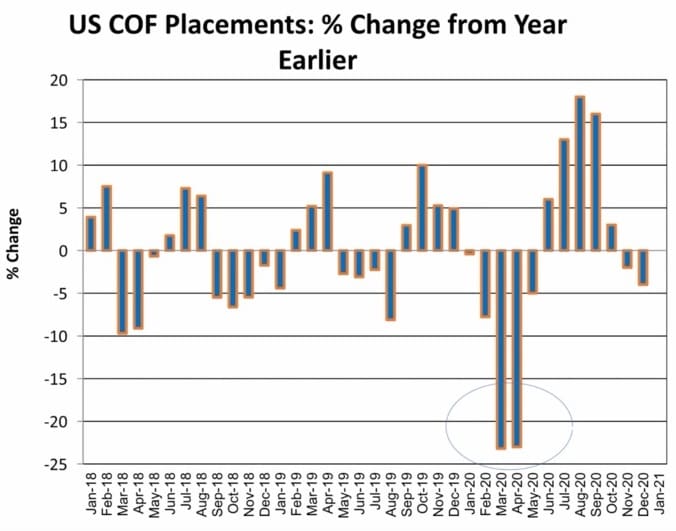 “That tells us that we have a pipeline of grainfed product – both out of North America and Australia – that is diminishing fast,” he said.

“The US and Australia are the two largest suppliers of grainfed product, worldwide. That has effectively created a shortage in the pipeline that is going to appear in the months of September, October and November this year, given typical grainfeeding programs. Japan, Korea and (despite recent suspension developments in Australia), China, will be looking for grainfed beef very soon for that period.”