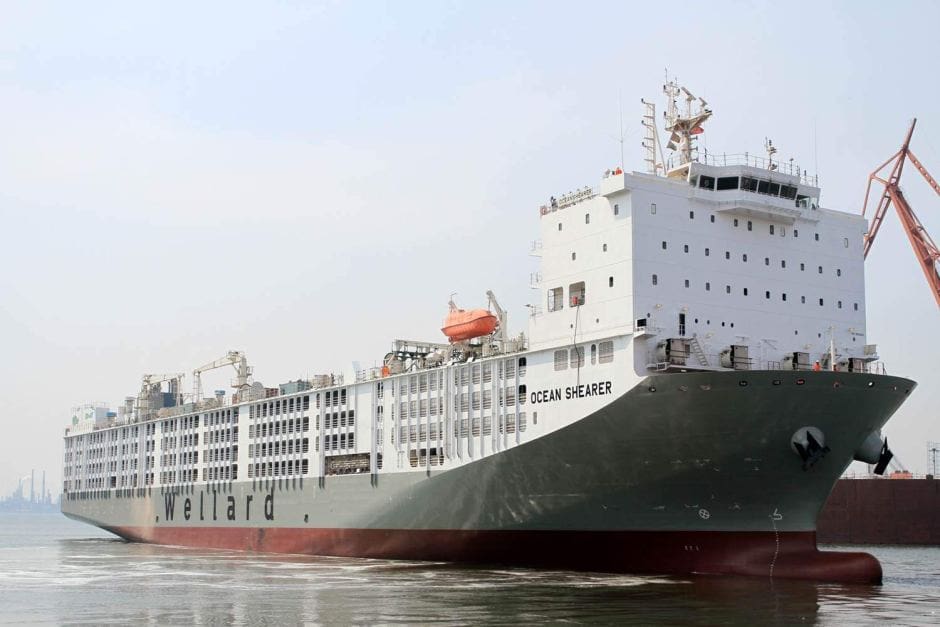 MV Ocean Shearer was launched in 2016.

Wellard Limited today announce to the ASX that it has signed a term sheet to sell the MV Ocean Shearer, the world’s largest purpose-built livestock export vessel, for US$53.0 million (AUD $77 million).

The buyer named in the announcement is Livestock Transport & Trading Co KSC from Kuwait, a company controlled by Al Mawashi Limited, a Kuwaiti publicly listed company, which trades in Australia as Kuwait Livestock Transport and Trading Company (KLTT). The buyer, among other activities, is one of the largest exporters of sheep from Australia to the Middle East.

Wellard says it intends to apply approximately US$42.3 million (AUS$62 million) from the proceeds to reducing its financial debt.

Upon the successful closure of the transaction the deal will complate the Company’s recapitalisation program, today’s statement said, reducing its financial debt to just US$16.7 million (AUD$24.6 million), a level which it says is more appropriate to current activities and market conditions.

The remaining US$10.7 million (AUD$15.8 million) will be retained as cash for operations, significantly strengthening the company’s working capital position.

Wellard said the sale means it can now focus exclusively on maximising earnings and profits from the company-owned MV Ocean Drover and MV Ocean Ute, and the long-term chartered MV Ocean Swagman, which was sold to major shareholder Heytesbury with a leaseback arrangement earlier this year. 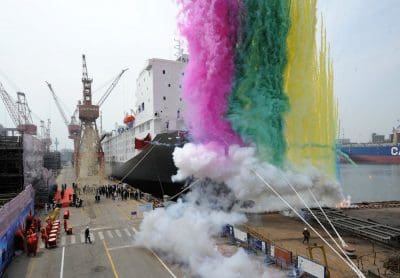 The MV Ocean Shearer was purpose built for Wellard by China’s Costco Shipyard in Dalian and delivered to the company in 2016.

The sale is subject to final documentation under the Norwegian Shipbrokers’ Association’s Memorandum of Agreement for Sale and Purchase of Ships.

Wellard said the mortgage to Intesa Sanpaolo Bank S.p.A. will be paid out and discharged, and anticipates the transaction will be completed later than March 2020.

It said the agreed price is slightly higher than the consolidated net book value of the vessel and the vessel will be treated as an asset held for sale when the Company’s interim accounts are lodged in February 2020.

Mr Klepec said that Wellard was paying approx. US$8 million (AUD$11.7 million) in principal and interest costs on the MV Ocean Shearer annually, in addition to various other fixed costs such as maintenance and crewing.

“Given our comparable sized vessel, the MV Ocean Drover has completed three times the number of voyages as the MV Ocean Shearer in 2019, it makes financial sense to release value and reduce debt from an under-utilised asset, adding A$15.8 million to our cash reserves and reducing our annual debt servicing by US$8 million,” he said.

He Wellard’s high debt load, which had become “a millstone around its neck”, would be consigned to history on the successful settlement of the transaction.

“Wellard can now focus on charter utilisation and running its vessels efficiently.

“Our Company has changed its approach and has become an international livestock logistics business, with more robust systems and processes, best-in-class animal welfare outcomes, a leaner overhead structure, and a more reliable revenue stream from its highly specialised charter operations.

“The Ocean Shearer has been the biggest vessel in our fleet, but it has been consistently underutilised in the current very volatile environment.

“It has been predominantly deployed in the South America-Turkey trade route, which has twice been closed suddenly, leaving Wellard with fixed financing and overhead costs but without revenues.

“KLTT’s purchase offer of US$53.0 million (AUD $77.8 million) represents a significant de-risking of Wellard’s business, and allows the Company to concentrate on the three remaining more economically attractive vessels, being the Ocean Drover, the Ocean Ute and the Ocean Swagman.

“KLTT will deploy the Ocean Shearer to the Australia–Middle East trade route, which I am pleased to note will likely be an ongoing benefit to Western Australian farmers and other businesses in the related supply-chain.

“Wellard certainly wishes KLTT every success in their ownership and operation of this very impressive vessel.”

In discharging the Intesa loan, the remaining “key-man” restrictions relating to the Balzarini family will also cease to exist.

Accordingly, the statement said, parties owned or controlled by former Wellard CEO Mr. Mauro Balzarini will no longer be required to hold a minimum 12.5pc shareholding in Wellard Limited.

“Wellard has been advised that when this restriction is lifted, creditors associated with Mr. Balzarini’s private interests will take possession of the majority of those previously restricted shares.

“Wellard has no influence over the timing and execution of that transfer, and an appropriate announcement will be made in due course.”

The statement said shareholder approval for the transaction is not required, as the transaction does not represent a substantial change in Wellard’s principal activities.

“ASX has advised that it will not exercise its discretion under Chapter 11 (Significant Transactions), and therefore Wellard’s shareholders are not required to approve this transaction,” the statement said.