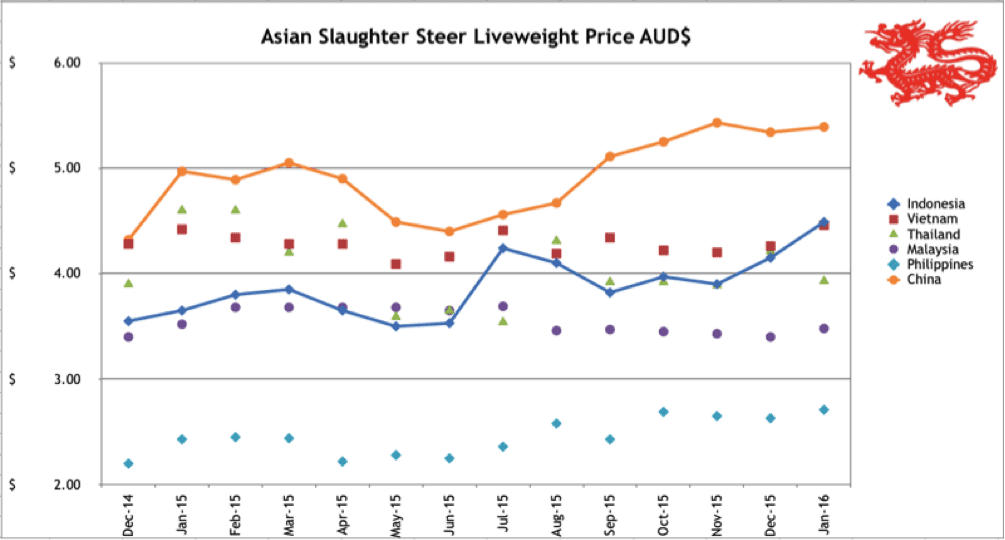 The ongoing shortage of slaughter cattle supplies following on from the very low import permit allocations in Q3 2015 has kept live prices up again to around Rp44,000 (excluding GST).

The weakening AUD makes the price rise look even higher than it is locally. There were signs however that by the end of January supplies were improving and price pressure was changing from upward to downward.

There is no other way to describe the current regulatory and commercial environment in the Indonesian beef industry but total chaos. While the government continues to claim that its aim is to reduce the price of beef (and other foods) to domestic consumers, it somehow manages to deliver a seemingly endless stream of policies that have precisely the opposite effect:

Prices have risen a little in the south and a lot in the north. HCM quotes range from 69,000 to 72,000 Dong per kg live weight while Hanoi prices range from 73 to 76,000 Dong. In both cases my advice is that a combination of the cold weather and improved feeding has tended to reduce carcase fat with buyers happy to pay more for higher yielding animals. The currency has also strengthened against the AUD pushing the A$ price to a new high. Vietnam’s lunar New Year celebrations of Tet are also coming up in the second week of February and this traditionally increases demand and prices across the board.

On the 31st of December the Vietnamese government reduced the import tax on all live cattle (breeder/feeder/slaughter) from 5% to zero which should give importers a nice jump in future profitability as a Tet holiday gift.

During this month, a small number of Australian feeder cattle were confirmed to be infected with Foot and Mouth Disease (FMD) in a limited number of feedlots from north to central Vietnam. Remarkably, despite zero immunity in most cases, the Australian feeders suffered only mild symptoms and generally recovered uneventfully after a short period with mouth lesions and some mild lameness. Spread amongst the Australian cattle was slow and limited to low numbers in each group. Many of the infected cattle were not previously vaccinated although all animals in the affected facilities were quickly vaccinated once the diagnosis was confirmed. Vaccination protocols vary between importers with some routinely vaccinating all animals on arrival and some only bothering if a risk appears. Thankfully, the capacity for the spread of FMD in susceptible cattle in the Vietnam environment appears to be dramatically less than in temperate areas like Europe.

Meat sales across the internet in Vietnam appear to be gaining popularity including local, USA and Australian product available for home delivery. See prices in this internet advertisement below.

Prices remain subdued at about Bht100 per kg live weight for domestic slaughter as the export trade to China continues to be restricted.

The only reason that the price has changed above is the Baht has strengthened against the AUD. Given this trading environment there is very little chance of future imports of live feeder or slaughter cattle from Australia until the fundamentals change to once again provide a useful margin for importers. The Thai government continues to investigate their options for live imports from alternative countries.

The Malaysian currency actually strengthened against the AUD this month while live cattle and beef prices remained static. The net effect on the quoted AUD price above is a small rise.

Little change in the Philippines which is extremely good considering that means a continued run of good seasons and stable politics. The peso has strengthened against the AUD which is the only reason that the cattle price has risen above.

Insiders tell me that the preparations for ramping up of live cattle imports from Australia to China are progressing at a snails pace as a result of a great deal of bureaucratic confusion and miscommunication relating to the complex ESCAS requirements and many other regulatory issues. The massive Chinese demand will no doubt eventually translate into greater imports of live cattle but it doesn’t look like there will be any significant numbers traded for perhaps 6 to 12 months at least. The vast array of very detailed regulations associated with live imports from Australia ensures that authorities can micro-manage every aspect of the imported cattle supply chain from where and how long they are in quarantine to when and how they can be slaughtered. Restrictions on the mixing of imported cattle make the business environment particularly difficult as multiple facilities are needed to hold separate shipments of stock to prevent them from contacting each other. Hopefully, the authorities will finally discover that most of these restrictions serve no purpose in terms of risk management of imported livestock and revert back to workable protocols.

During a visit to southern Lao last month I took this photo in a provincial town wet market. There were only a few beef stalls with the majority of meat on offer chicken and pork. The ladies on the stall advised that some of the beef on display was from buffalo and this was priced at almost 10% more than cattle beef. Considering the very low average incomes of Lao workers this represents close to the highest price of beef in S E Asia in terms of average daily spending power. 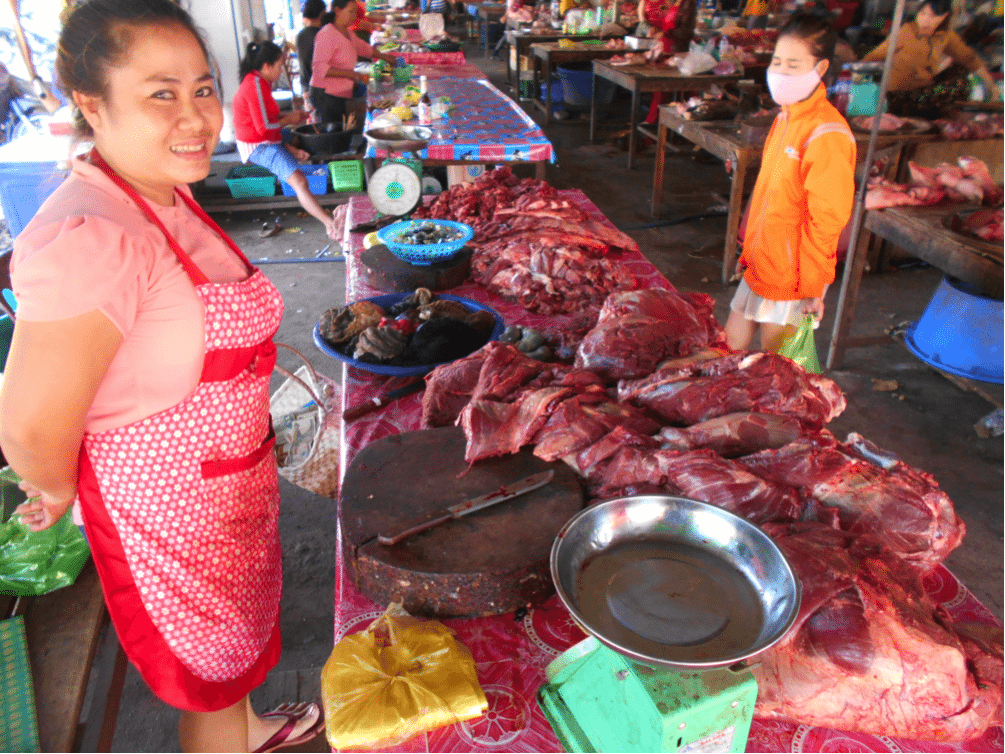 The beef (and buffalo) section at the Pakse wet market, southern Laos.