Slaughter steer rates have risen a little from Rp49 to Rp50,000 per kg live weight at the end of October. Despite this slight rise, the market is still very soft with numbers traded at quite low levels. Once again, these low sales numbers have continued to compound the problem of overfat cattle remaining in the feedlot losing even more money for their importers as they continue to pay to feed overweight stock resulting in an even fatter animal which will attract further discounts. The top rates for the best, low fat, finished steers was as high as Rp52,000 per kg while the bottom rates for excessively fat steers was as low as Rp46k per kg. Slaughter cow rates are around Rp44,500 per kg.

A recent presentation from the Indonesian importers at the QLEA meeting in Townsville indicated that the average loss for importers was in the order of Rp6,000 per kg for finished stock. For a fat steer at 500kg, this loss adds up to a total of Rp3,000,000 or a horrendous loss of AUD$280 per head. The speaker also suggested that, in the interests of the future of the trade, producers should reduce their prices to their Indonesian customers in order to prevent a total collapse of the importing industry and protect their own future market. While this is a perfectly logical and reasonable argument, I seem to remember a similar proposition being ignored during the many years of drought, low prices and hardship suffered by Australian producers when the situation was reversed. I am afraid that it is human nature for market participants to take advantage of a profitable opportunity now rather than giving it up for potential future benefits. Regardless of the genuine sympathy felt by the Australian producers for the importers plight, I expect that the market will be left to work itself out without any intervention from industry or governments.

Australian government figures for September show a total of 29,972 feeder cattle exported to Indonesia, down a little on the August figure of 32,300. 14,806 of these feeders were shipped from Broome, Western Australia while the balance of 15,166 were dispatched from Darwin. Darren Gilbert from the Port of Darwin has advised that 8,185 feeders were exported to Indonesia during October.

The Indonesian Covid position continues to improve with cases falling and vaccination rates on the rise. I suspect a lot of this decrease in new cases is a new focus on vaccination rather than testing as is the case in most other nations around the globe. Incoming travel restrictions are being reviewed and eased every few weeks.

My agent in Jakarta advises that they were once again unable to find any Indian buffalo meat (IBM) in the supermarkets they visited for their price checks at the end of October.

The Indonesian press this month included many articles about regional Indonesian governments proposing a long list of beef cattle breeding projects including West Sumatera, East Kalimantan, Aceh, NTT and South Sulawesi. The biggest hurdle to getting these initiatives off the ground is the cost. Firstly, if anyone thinks that the current cost of steers is high, this is nothing compared to the recent increase in breeder cattle prices. Breeding heifers in Australia are at an all-time premium at this stage of the aggressive national herd rebuilding process so the cost of even a small shipment of heifers will be enormous. The next hitch is that as a result of some problems with poor management of the welfare of breeders from some previous shipments there will need to be a substantial investment in post arrival monitoring as well as recovery contingencies for any recipient groups who are unable to provide adequate care. I can confirm through personal experience that while this after-sales service process is entirely possible it is very expensive.

A recent project completed by the Indonesia-Australia Red Meat Partnership carefully mentored and measured a number of small holder breeder projects in Indonesia over a 5 year period. The result was that it is now demonstrated with hard evidence that Australian Brahman Cross breeders are capable of outstanding performance in traditional small holder, cut and carry management systems. The best example is located in a village outside Lampung in south Sumatera. This project has achieved exceptional growth, reproductive and commercial performance for the last 5 years and are happy to show anyone who is interested how they do it. 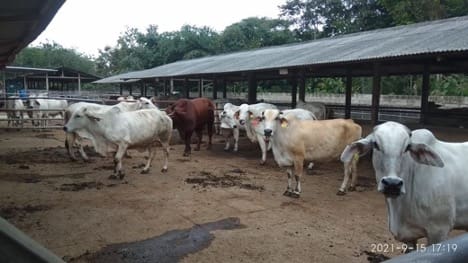 Australian breeders at KPT in Lampung. Averaging over 90% annual calving rate over 5 years as a result of excellent nutrition and husbandry 365 days a year. 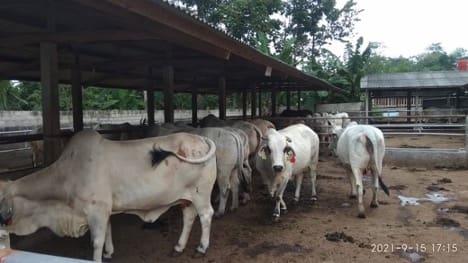 Fed on a mix of cut grass and local agricultural waste products. The high value of grown progeny, low mortality and the low cost of feed resources ensures strong profitability. When done properly this model is simple, repeatable and proven.

Darwin feeder steer prices have actually risen a little during October with the latest quote for the end of the month at AUD$4.30 per kg live weight. Townsville prices remain firm at around $3.80 for heavy ox.

Slaughter rates have not changed in many months with the average price still at Dong 82,000 per kg live weight for steers. All eyes are on the imminent release of the Brazilian bulls from their extended post arrival quarantine. The 45 days is due to end during the first week of November so they should be out by the time this report is published. Up to date, a small number of injured animals have been sent from quarantine to emergency slaughter with the reports from butchers being very positive. I am advised that prices in Brazil have plunged recently, presumably due to the inability to export processed beef to China and elsewhere. If these low prices continue then the landed price for live exports in Vietnam will become even more attractive. I am advised that the CIF price of Australian slaughter cattle landed Vietnam at the end of October would be close to USD$4 per kg while the CIF for Brazilian bulls is close to a full USD$1 per kg less.

See graphic below showing that the majority of cattle in Brazil are finished on pasture which will ensure that their live export bulls will be extremely lean which is exactly how the Asian butchers and consumers like them. 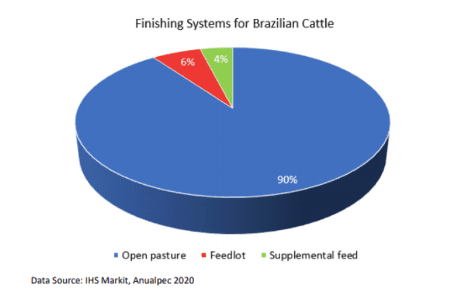 The retail prices of beef, chicken and pork have reduced to varying degrees in almost all markets across Vietnam with pork showing the most significant rate reduction. Supermarket beef showed a small rise at the very end of October. Supermarkets and wet markets are now open to the public although many shoppers are still choosing to stay away and continue to buy online.

As with Indonesia, Vietnam has also experienced an encouraging improvement in its pandemic situation during October, see below. 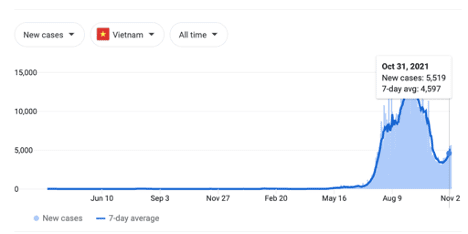 The only information I have for October is that there were no shipments to Vietnam from Townsville or Darwin so even if there were some ships from Western Australian ports the total export numbers would probably be down at levels even lower than September. Not much improvement in the ASF situation with lots of new outbreaks throughout Vietnam during October.

Slaughter cattle prices have firmed slightly in Shanghai while I don’t have a report from Beijing this month. Shanghai supermarket beef prices have increased by about 5% while retail rates for pork are up by more than 40%. Last month, cattle and pork prices were falling.

It appears that Brazilian shipments of frozen beef remain suspended pending further investigation of the 2 atypical BSE cases. This is taking much longer than the previous notification in 2019 when the trade was interrupted for only 10 days. Brazil have been one of the largest exporters of beef into China for some time so a total halt must be having a severe impact at both ends of the market.

In the words of my reporting agent, October was “flat” in terms of beef and cattle prices as well as general business activity with the pandemic restrictions

continuing to restrain national economic activity. Beef and live cattle prices have not changed in many months.

Fuel prices are rising as they are elsewhere around the world, but the Philippines is particularly sensitive to increased energy costs as they have so little domestic petroleum production. Falling Covid case reports shown in the graph below are encouraging but vaccination rates are still quite low.

The number of new cases is improving but vaccination rates are still low.

Slaughter cattle prices have slipped once again this month with light slaughter cattle selling for 82 THB/kg and heavy slaughter cattle for 80 THB per kg. Feeders are down to 100-105 THB per kg. Beef in the wet market is unchanged at 230 THB per kg. As shown on the JHU graph below, new Covid 19 cases are falling although not enough for the economy to return to normal pre-Covid business activity, especially the vital return of international tourists. Wet and supermarkets are fully open to the public once again and there is no longer a curfew restricting public movements. My agent is not hearing any news from inside Myanmar except that there are a very large number of Burmese citizens crossing the border into Thailand illegally suggesting that the political situation is either no better or getting worse.

Still travelling in the USA 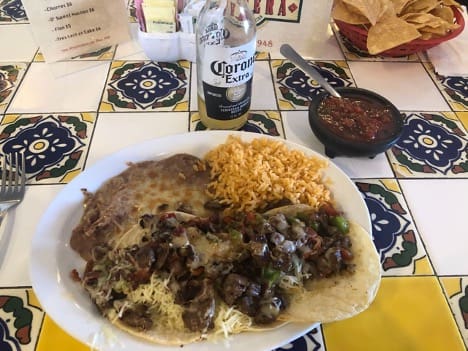 The Riviera Mexican restaurant in El Paso Texas gets a score of 9.5 out of 10. The dish above is a beef taco and it is a magnificent way to eat beef mixed with beans, rice, cheese and vegetables served on a soft taco (flat bread). 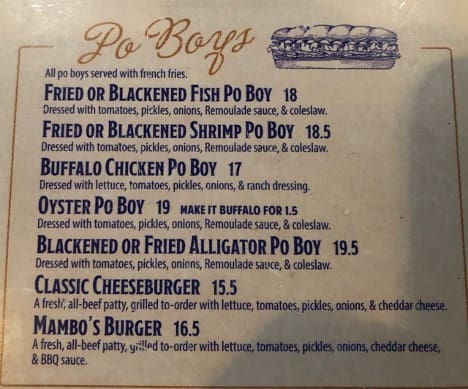 Usually, I will try the beef dishes when I visit a new place but in this case I could not resist the Alligator sandwich. A “Po Boy” is the slang name given to a big sandwich suitable for a “Poor Boy” i.e., big and cheap to fill up a poor person. In Bourbon Street, New Orleans, these sandwiches are huge but so is the price. Certainly, too expensive for a poor boy. Remember that these prices are in USD$ so the fish Po boy is AUD$24 and the Alligator Po boy is AUD$26!! (@AUD75 cents) But I made the right choice as the fried alligator was delicious. 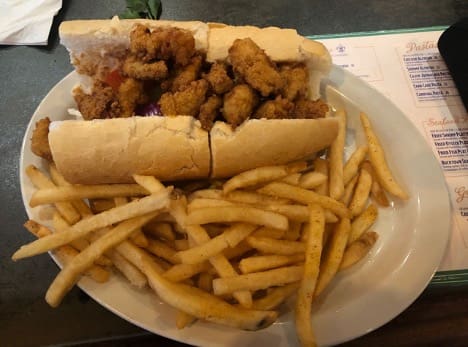 This fried alligator Po Boy was outstanding and too much for this poor boy to finish.

I didn’t have any beef experiences during my visit to Washington DC this week but the policies passed in this Capitol building and the big house below probably have the capacity to change the course of global beef markets more than any other places on earth. 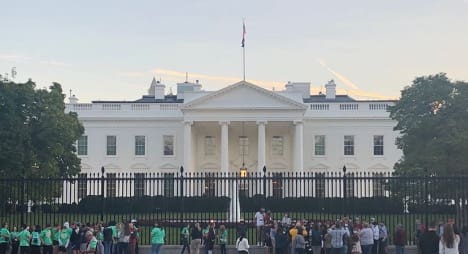