Slaughter cattle prices have surged upwards this month from Rp49,000 at the end of December to Rp52,000 per kg live weight in late January.

The price range quoted during January ranged from Rp48.5K in Lampung to as high as Rp54,000 in West Java.

Any encouragement to importers from these rising prices would have been totally crushed by the spectacular rise in live cattle import rates during the same period.

At the end of December, Darwin feeder steers were trading at around AUD$4.70 per kg live weight with some speculation that $5 might be possible in the coming months.

By the end of January Darwin feeders were selling for $5.35 per kg live weight and above.

Using the rough rule of thumb of AUD$1 per kg for all costs of the export process this lands the feeder on the Indonesian wharf at about AUD$6.35 or USD$4.57 using AUD72 cents to the USD. This converts to a delivered cost of about Rp65,000 per kg against a selling price of Rp52,000.

My advice is that the very best lot feeders can add value to the animal of around Rp6,000 per kg live weight during an efficient feeding period.

The figures above suggest that the top lot feeders will still be close to Rp7,000 per kg in the red after doing a great fattening job.

For a 550kg slaughter steer this suggests a loss of close to AUD$380 per head.

If this wasn’t bad enough, feedlot ration costs are rising steeply. Since the beginning of the trade, low feed costs have been half of the driving force for this successful business model with cheap Aussie feeder cattle the other half.

Now, the price of traditional local feed resources such as tapioca waste, copra meal, PKC and many other commodities are rising due to improved extraction technologies and an increase in export demand and price. Throw in the reduced domestic demand driven by the pandemic, and importers are being hammered from every direction.

Despite these losses a little over 41,000 head of feeders were exported from Australia in December and another 9424 from Darwin during January.

From my perspective there are a number of reasons that are encouraging importers to keep trading despite the ongoing losses:

There may well be alternative options that will allow the industry to survive in the short term that I have not considered. For their sake I hope so.

The annual total for Aussie exports to Indonesia during 2021 was 409,040 head comprised of 406,781 feeders and 2,259 breeders. This number represented a 13% reduction from the previous 12 months. I assume this feeder figure includes buffalo which were the only bright spot for this market in respect to price. It is likely that any importers that are able to survive these tough market conditions will be trying to increase the proportion of feeder buffalo in their shipments. Information in the market suggests that there will soon be a significant importation of frozen Indian buffalo meat arriving in Indonesian ports.

The Omicron variant has arrived in Indonesia resulting in a surge of cases and a reversal in the national trend of opening up to daily activities and international borders. Hopefully this will resolve relatively quickly as it has in other parts of the world. Some nice rib bones in the Pasar Modern wet market in BSD city Jakarta next to some small ruminant carcases which I am guessing are both sheep and goats.

Darwin feeder steer prices continue to fly towards the moon with rates at the end of January at $5.35. This is largely driven by massive demand from the eastern states where abattoirs are able to continue to increase prices for slaughter cattle and still remain profitable. Solid international demand and a weak Aussie dollar suggests that this strong demand for low numbers of fat cattle will continue to support these spectacular prices well into 2022 if not longer.

Slaughter steer prices have increased about Dong1,000 per kg live this month although, just like the importers in Indonesia this will be of very little aid to Vietnamese importers faced with slaughter cattle prices rising at a much faster rate. A single shipment of about 2,100 head of mainly slaughter bulls sailed from Townsville to Vietnam during January.

With the pandemic continuing to create havoc with economies around the world, African Swine Fever (ASF) crushing the pork industries in Southeast Asia, Lumpy Skin Disease reducing domestic beef production and sky high prices for Australian live cattle making it impossible for traders to have any hope for a profit, the future for this trade looks grim. The best chance for a recovery of the Vietnamese trade is if they can restart the importation of Brazilian live cattle. Cattle prices remain subdued in Brazil, yields from the first Brazilian imports were quite good (all bulls), shipping rates should be going down due to reduced demand for vessels in Asia and these animals are able to be slaughtered at any abattoir in Vietnam as ESCAS welfare restrictions only apply to stock from Australia.

Vinamilk, the biggest dairy producer in Vietnam has commenced a joint venture with the Japanese trading house Sojitz to produce wagyu cross cattle using artificial insemination in their dairy herds. While this type of beef is the most expensive in the market it will be cheaper than importing boxed product from Japan. Vinamilk began selling Japanese beef in Hanoi supermarkets during December to test the market and hoping build up a following for their future local production. Slaughter cattle prices rose in Beijing by 4% during January while rates were firm in Shanghai which led into the Chinese New Year festival commencing on the 1st of February welcoming in the Year of the Tiger. February is a busy month for China as the Winter Olympics are hosted in Beijing from the 4th to the 20th of February. Chicken and pork prices movements were minimal.

As the ban on Brazilian beef was removed on the 15th of December it is likely that substantial quantities of Brazilian product will have arrived in China during late January to help moderate beef prices during this traditional peak consumption period.

When I consider what comment to make on the Chinese situation, I quickly realise that using logic is a waste of time as the Chinese economy is non-commercial. The Chinese economy is driven by government policy with little consideration of factors that would influence economies in the West. The beef importation policies are a good example with serious beef shortages produced by the BSE/Brazilian ban at the same time a significant number of Australian abattoirs are banned for extended periods due to alleged documentation issues. Politics rule the day while demand and supply and the needs of the population are ignored. Slaughter cattle prices have weakened a little to about 128 Peso per kg live weight. This comes at a time when the Philippines food sector is in serious trouble. ASF has now broken out in a wide range of locations in Mindanao which is one of the main pig production areas for the Philippines (see the FAO map below). Covid 19 is also making a new surge while my agent advises that the national fish catch is collapsing resulting in severe shortages of fresh fish. And of course, as with everywhere else in the world, fuel prices are through the roof. All these factors are combining to cause serious disruptions to food and other sectors in the Philippines economy. And the forthcoming presidential election campaigning is not improving anybody’s outlook for the future. Slaughter cattle prices have remained stable during January with the rise in the AUD figure above due only to currency movements. For the first time in more than a year, the price of beef in the wet market has had a sharp rise from the usual rates of about Baht 230 per kg to Baht 270 in January. My reporter tells me that inflation is rising in Thailand and this might partly explain the beef price rise in the wet market.  The big news this month is a number of outbreaks of ASF across Thailand which can be seen on the FAO map above. These outbreaks are matched by similar events during January in the neighbouring countries of Myanmar, Laos, Cambodia and Malaysia. Thais are big pork consumers, so this is likely to have a major impact on pork and other food prices including beef in the coming months.

I left Australia on a cattle ship in mid-August 2021 with a small back-pack of tropical work clothes and finally arrived home on the 10th of January 2022 with a 10 day homecoming quarantine present from the Queensland government. Fortunately for me I did my quarantine in the guest quarters of Angus and Margi Adnam where the hospitality is 7 stars.

One of my most favourite Australian beef shops is the Dayboro butcher about one hour north of Brisbane. Their sausages are outstanding. The thin pork sausages are the pick of this excellent selection of snags. Their beef is great too with quite reasonable pricing. 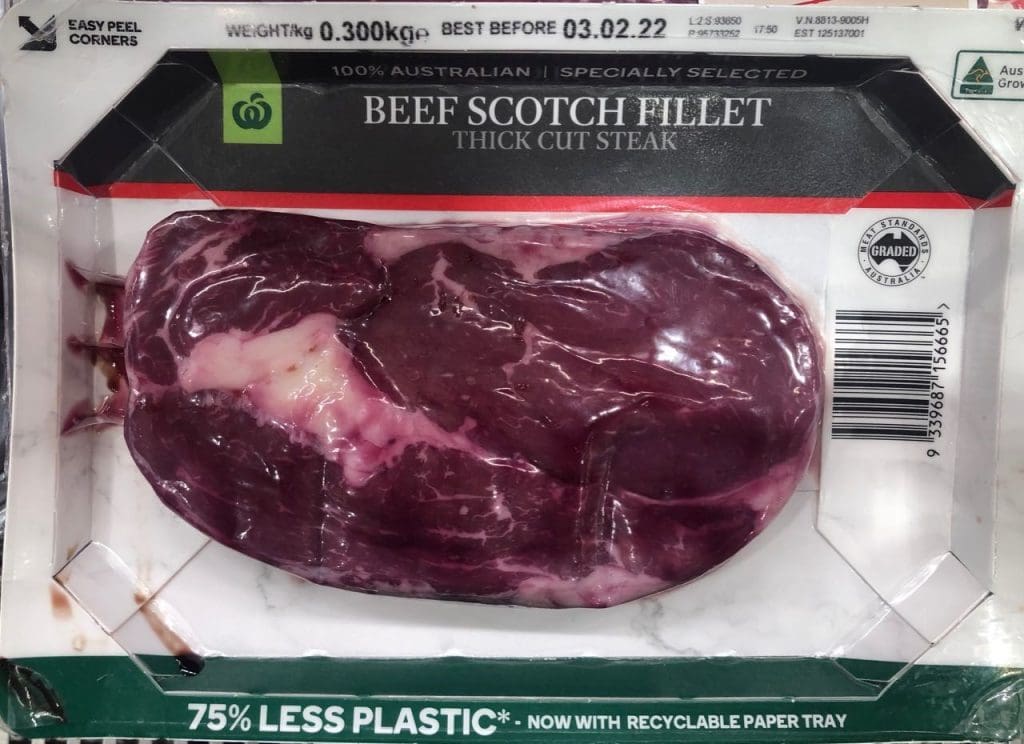 I think that Woolies has the best beef selection when compared to the other large supermarkets although the price tag of $63.33 per kg for this scotch at Woolworths in Oxley, Brisbane was a bit of a shock. High prices are still better than no product. I took this photo in the Coles supermarket in the Darwin CBD at the end of January following the heavy rain events across the entire country which cut off all road and rail links from the rest of Australia to the Northern Territory. For once Covid 19 was not to blame.