Slaughter steer rates have eased to Rp50,000 per kg live weight down from Rp51k last month as the market and indeed the whole country struggles with a new wave of Covid 19 infections.

The highest quote reported for June was Rp51k per kg while Rp49 was the lowest for steers in Lampung.

These high prices are combining with the Covid movement restriction issues to result in very weak demand.

The current surge of Covid infections was predicted by authorities with the expectation of citizens going home to their family villages for the annual Lebaran holiday. Despite travel restrictions imposed by all levels of central and regional governments, many Indonesians ignored the warnings and celebrated the festival with their families across the nation. The Lebaran holiday unfortunately coincided with the entry to Indonesia of the more transmissible variants of the Covid virus resulting in a massive surge of infections which has led to the central government ordering a very strict lockdown from the beginning of July until the 20th when the situation will be reviewed. Health care services are already overwhelmed by new patients while many intensive care units have reached their capacity.

Bali has been given the priority for vaccination delivery in order to assist to open up the tourist trade as quickly as possible so the Balinese can get back to work. The Bali population is about 4.4 million and I would guess that about 3 million of those would be adults. Current vaccine statistics indicate that 2.4 million (80% of adults) have had their first shot while 750,000 (25%) have had their second dose. These figures are well ahead of the rest of the country. Despite these encouraging figures, the head of Denpasar Health Department advises that ICU departments in three of the city’s Covid-19 referral hospitals are filled to 100% capacity.

Wet market beef prices have eased slightly below the historic highs seen last month (Rp160,000/AUD$14.66 per kg) but still remain well above normal rates at Rp155,000/kg at the end of June.

Indian buffalo meat was not available at any of the supermarkets or wet markets visited by my reporter but the staff advised that when it is in stock, the prices continue to range between Rp80 and Rp90,000 per kg. Stock shortages at the supermarkets where we check monthly prices may suggest that national frozen buffalo supplies are running low. This is the view of the main street of the Jakarta CBD on the first day of lockdown on July 3rd. 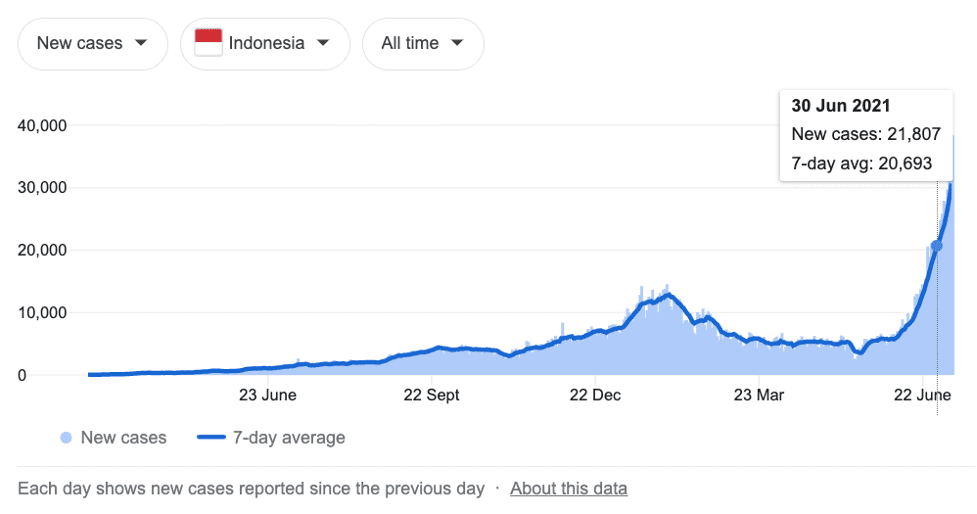 It appears that the central government has purposely included the Qurban festival which will take place on the 20th of July in the lockdown period in an attempt to once again restrict intensive religious family interactions during this important festival time. With many hundreds of thousands of cattle and millions of sheep and goats normally slaughtered at this time (over a 3 day period) there could be a major reduction in the slaughter numbers which may well result in downward pressure on domestic meat prices as many of these animals could be held over until after the festival and then enter the everyday domestic slaughter trade resulting in a spike in supply.

The Ministry of Finance has announced that it will impose a new value added tax (VAT) to some premium food products including wagyu beef, shirataki and basmati rice. According to the Ministry, the VAT on these premium items is a form of tax justice for locally produced food. Wet markets remain open with numbers down and customers spending less time in the market. This knuckle at the BSD City Carrefour supermarket is selling for Rp192,500 per kg (AUD$17.66) while the same product at SuperIndo where our indicator price comes from is Rp157,950.

Darwin feeder steer prices remain stuck firmly at AUD$4.10 per kg live weight. I expect that this is the first time ever that northern Australian cattle prices have not been significantly lower in June which, along with July, is the peak of the mustering and selling period for the year. In fact, those who are closest to the market are suggesting that if anything, July may see an increase over the June rate for the first time in Northern Territory cattle trading history. Townsville seems to be following a similar pattern with heavy steers suitable for Vietnam selling for $3.80 at the end of June with predictions for price increases in July.

Slaughter rates continue to hold steady at their recent levels during June with rates averaging Dong 82,000 per kg live weight. However, demand is likely to be slipping lower in the near future as the recent surge in Covid-19 cases has resulted in severe supply chain disruptions to all levels of food distribution across the country as many wet markets and wholesale markets have closed or are operating under severe restrictions.

The graph above is from the JHU showing the sharp rise in Covid cases in June.

A recent news article described the status of the cattle herd at the end of 2020. The national cattle herd is around 6.3 million head and increasing very slightly while the buffalo herd is at 2.2 million and decreasing slowly.

The value of the product in India is in the order of USD$3,000 per ton. If the insurance and freight costs a conservative USD$1,000 per ton, this total of $414 million would suggest that the volume imported by Vietnam during 2020 could be in the order of 100,000 tons. As the Vietnamese do not consume a significant amount of this Indian product, the majority is almost certainly being forwarded into China via the grey channel.

Vietnam is having rotten luck at the moment with a sharp increase in Covid-19, ongoing outbreaks of African Swine Fever (see red blocks below) and an expanding epidemic of Lumpy skin disease (LSD) in its cattle and buffalo herds. With LSD also recently discovered in Thailand this has resulted in strict border closures which cuts off the second most common source of live cattle imports after Australia.

The ASF has resulted in an interesting transition for the pork industry. Before the arrival of ASF, backyard farms accounted for 99% of domestic pig production. The Deputy Minister for Agriculture and Rural Development recently advised that the level of back yard operators has now dropped to 50% following the rapid development of large intensive operations. The bright red blocks represent new outbreaks during June with Vietnam showing the most while China has reported none. Back yard cow being treated for Lumpy Skin Disease.

In the graph below I have compared the trend in Chinese pork prices with those for live beef cattle and there appears to be some correlation between the falling pork price from the beginning of 2021 and a similar fall in the rates for cattle with the exception of June 2021. China first reported their outbreak of African Swine Fever (ASF) in August 2018 followed by a drop in their pig population of roughly 50% over the next 12 – 18 months as a result of infection mortalities and eradication destocking measures. Cattle prices peaked in October 2020 when pork prices were on a historically high plateau ranging from Yuan 50 to Y61 per kg.  At about this time China was claiming that they had beaten ASF and that their herd rebuilding was well under way. These claims were met by many observers with a considerable amount of scepticism.  Perhaps the Chinese government was right and the herd has recovered. These claims of a dramatic recovery in the national pig herd would appear to be supported by the very rapid 62% decline in retail pork prices since February 2021. The pig herd recovery claims are also backed up by a massive fall in US pork exports to China this year. The sudden rise in the live cattle rates in June could be explained by the sudden Argentine beef export suspension which commenced on the 17th of May as the supplies from Argentina during March and April represented around 20% of total Chinese beef imports. 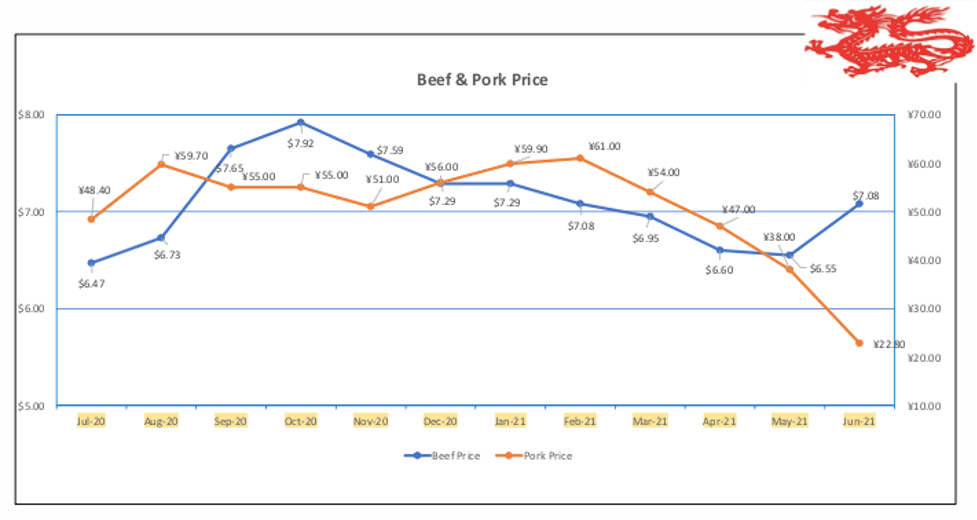 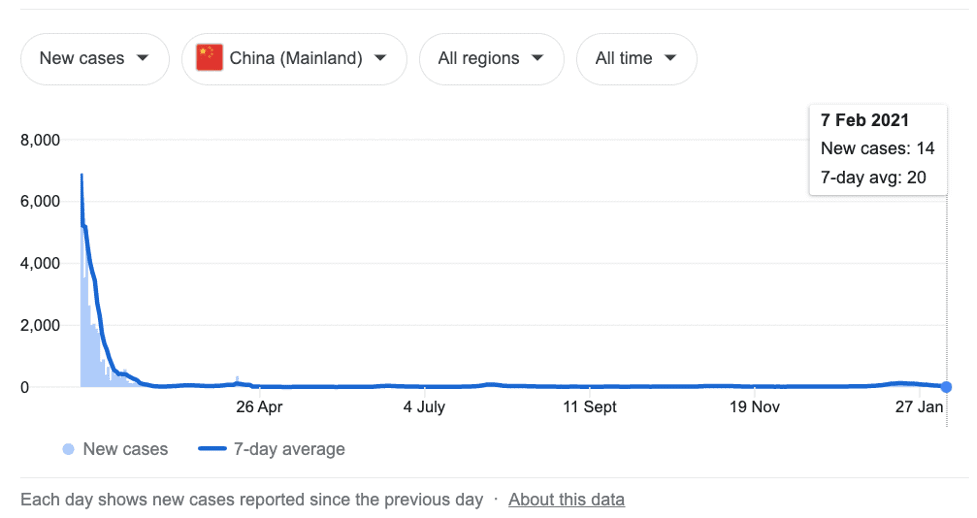 Just for completeness I have included this JHU graph for Covid in China. This is the latest information that JHU have as of a few days ago.

Rates for slaughter cattle remained steady again during June. Unlike the other countries in the region, the Philippines is had its spike in Covid cases in March/April of 2021 with a subsequent decline in cases since although they still remain at an unacceptably high level of more than 4,000 new cases per day. ASF continues to disrupt the pig industry with new outbreaks in Luzon and Mindanao in the middle of June.

While the import figures for the Philippines are modest they are showing a very encouraging trend with the imports of feeder cattle for the 12 months to the end of May 2021 at 23,000 head which represents a year on year increase of 42%. Year to date figures are 8,547 until the end of May which is 34% up on this period last year. Once Covid and ASF are under control, the Philippines could become a significant live export customer for Australia once again. 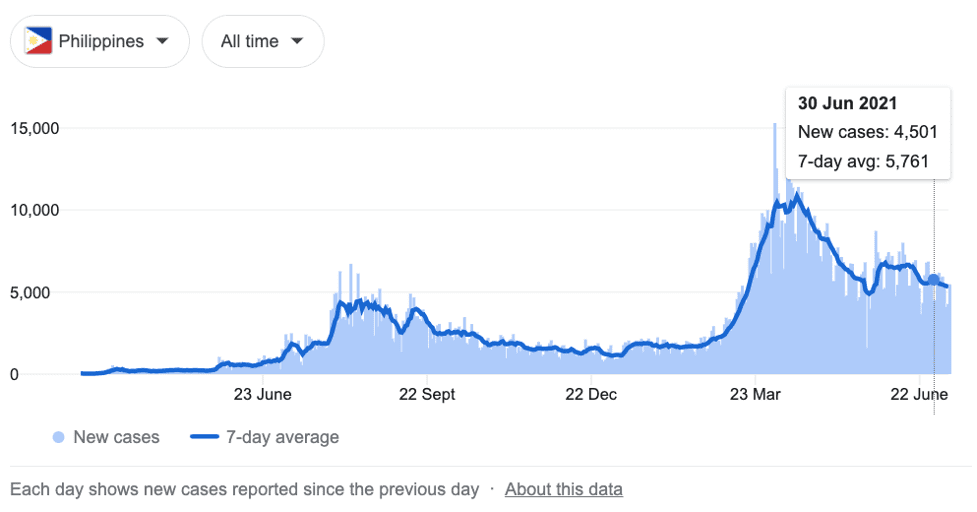 Slaughter cattle prices continue their steady decline with the rate falling to 100 Baht per kg during June (107 in April and104 in May). As with Vietnam, Thailand is dealing with multiple issues mainly related to viruses but with the additional problem of violent political turmoil in Myanmar leading to the complete closure of the cross border live cattle trade. Regardless of government regulations, a significant number of Thai fat cattle almost always find their way to Vietnam as their second largest supplier of live slaughter cattle after Australia. The new outbreak of Lumpy Skin disease has ensured that the borders connecting Thailand to Vietnam really are closed to live cattle traffic regardless of the smugglers best efforts. Covid 19 is also causing serious disruptions to the domestic cattle and meat distribution networks with the end result being reduced demand from butchers and lower prices to growers. 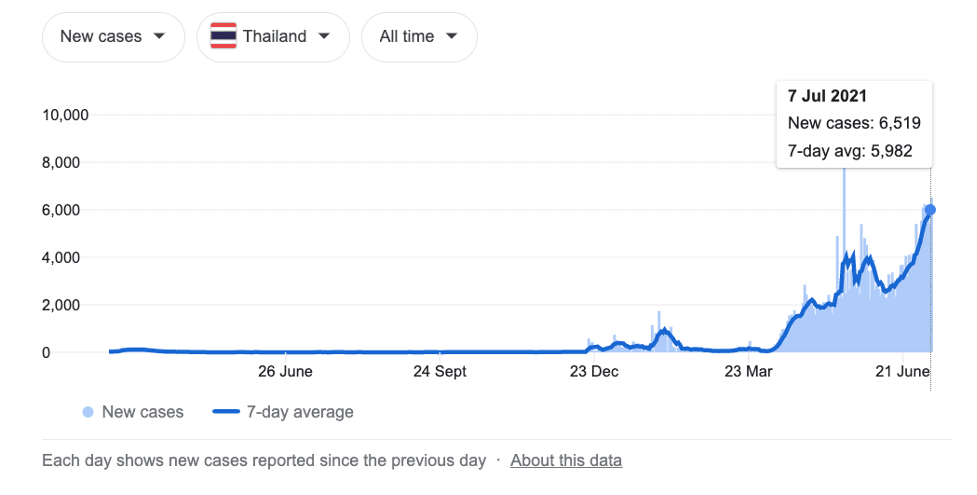 My sister Tracey spent a week in the south island of NZ in June enjoying the scenery, food and wine and gave it the very highest marks in all respects. I remember asking a very knowledgeable (Australian) international meat trader, which country produced the best beef in the world. He looked around to make sure nobody was listening then told me that it was New Zealand. Eye fillet from the Farro supermarket chain @NZ$44.99 per kg. Sirloin for NZ$33.99 per kg at the Farro supermarket. Most of the restaurants had substantial offerings of dry aged beef.

The business end of the menu from Cucina in the town of Oamaru in New Zealand’s south island.