Story updated with additional information 7am, 15/2

This is the highest auction price ever paid for a bos Taurus bull in Australia, but as seen in Beef Central’s comprehensive breed records list, still sits behind a couple of the heady tropical breed prices recorded over the years in the northern industry.

The Simmental breed has gradually been building momentum in the Australian beef industry, led by the record-breaking vendors, the Baker family, from Woonallee stud near Furner, in South Australia. This year’s annual sale was only the Bakers’ tenth.

This week’s Genetics Review column was planned to be an investigation into the growing interest in ‘black’ coated breeds other than Angus – Black Simmental and Black Limousin, SimAngus, Lim-Flex, Brangus, Ultrablacks etc – but that will have to wait for next week as the $160,000 sale is digested.

The record-breaker is 18-month-old 1030kg Woonallee Los Angeles, not surprisingly a Poll but perhaps surprisingly of ‘traditional’ Simmental colour with the broken white face.

The total bull catalogue at Woonallee last Thursday featured 102 bulls that produced a total clearance for an average of $9759. Two thirds of these bulls were either Black Simmentals or SimAngus, an indication where the breed could be heading. Or is this indication now not so clear?

Sired by New Zealander Glen Anthony Y-Arta AY02 (P), the record breaker is from a Woonallee dam with a South African background.

Buyer Brett Nobbs of Nobbs Cattle Co (NCC) from Duaringa in Central Queensland is no stranger to record prices. 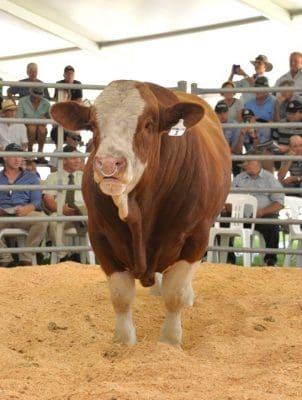 The new record-holder in the Woonallee selling ring

Six bidders were in contention for the record-setter at Woonallee last Thursday, with bidding starting at $40,000, quickly topped by an online bid of $50,000. That took the bull past the existing Simmental breed record price of $46,000 paid at the 2013 Woonallee sale by another Queensland operation, Billa Creek, Dulacca.

The bids then took off in rapid succession before NCC entered the fray at $120,000, and ultimately became the proud new owner. Under-bidder was the Bradshaw family bidding online from Wandoan, Qld, previous bull buyers at Woonallee including the $45,000 top priced bull in 2015.

Significantly, new owner Brett Nobbs has already paid a significant part of his purchase price, with a string of international semen sales over the past few days into diverse markets including New Zealand, Ireland, Argentina, Canada, the US and elsewhere. Los Angeles will now go into an AI centre for collection, both for NCC’s use and international and domestic customers.

It is still early times in the development of Nobbs Cattle Co’s pure Simmental breeding program, with 100 traditional coloured females based on successful South African Fleckvieh style bloodlines, and two stud sires, of which Los Angeles is now one.

What’s driven Mr Nobbs interest in branching into a second breed, in addition to his highly successful Red and Grey Brahman breeding interests?

“I’ve always had an interest in Simmental cattle. Mr family used to use them in commercial crossbreeding operations in Central Queensland years ago. Simmental cross cattle always seem to be well sought-after by buyers in this region – it’s just that there aren’t a lot of them around,” he said.

“To this point, it’s fair to say that there has not been a huge supply of Simmental bulls available to commercial buyers in Queensland. Charolais have tended to dominate here, as a Euro crossbreeding option.”

“They are the dominant Euro breed in South Africa, where they have been bred for the conditions – a cleaner-coated, fine haired animal. A lot of the Australian Simmentals have been bred up from a Hereford base, and you can still see the remnants of it in the coat.”

“I like the do-ability and finishing ability and softness of some of the Simmental cattle over some other Euro options. The Simmental definitely has better maternal traits, and better milking F1 females.”

NCC plans to produce about 200 embryos in an upcoming artificial breeding program, and expects to sell its first line of Simmental bulls in 2019.

“We preferred to get the big investment done up-front (ET work, and purchasing donor females) and get this program kicked-off and into full production quickly, rather than waiting for years to breed up using natural matings,” Mr Nobbs said.

There were two other important factors in the decision to expand into a complementary breed, in addition to his Brahman bull producing business:

Ultimately his selection went on to be the junior champion female at Melbourne and reserve at Adelaide and is a full sister to this record bull. He also purchased the same “pick of the 2016 drop heifers” at the female sale the night before Thursday’s bull sale, for $17,000. It was while he was down selecting that initial heifer that he first saw Los Angeles on his recipient dam.

Mr Nobbs may be new to Simmental breeding, but is one of the most widely respected and successful Brahman breeders in the country.

“I see a lot of beef bulls, and this bull is extraordinary; a once in a lifetime bull. With that weight for age, his softness, skin, fat cover, performance levels and pedigree, he’s got it all, and also with such an amazing temperament,” he said.

“I’ve only ever seen one other bull like that before, a Brahman imported from the US. I’m confident this bull will be a game and breed changer.”

Woonallee is retaining 200 straws of semen for in-herd use only. The bull will be collected for export semen sales and while yet undecided, Mr Nobbs said there is a possibility that limited packages may be offered within Australia.

“We wanted to start with the best and the quality of inputs is so important in the quality a stud breeder can produce. This sale result is good for the breed, and we believe he can have a big impact with the right opportunities,” he said.

Woonallee stud principal and vendor of the new record-setter, Tom Baker, said he was pleased that stud breeders ‘got to have a go at what they wanted’ in last Thursday’s sale, while those who wanted commercial bulls at value were well catered for.

“In fact, while the records are mind blowing, the most pleasing aspect was that all our regular commercial clients were able to buy bulls at good value,” he said.

With 103 registrations at the sale from all states and New Zealand, plus a further 26 registered on-line through Elite Livestock Auctions, there were always going to be some bidders who missed out.

In other autumn bull sale news, last week’s Big Country Brahman Sale at Charters Towers, Qld also left the industry spellbound when 271 Brahman bulls sold to $94,000, grossed $2.95 million and averaged $8902. Bull numbers were up 27pc, the gross was up 47pc and the average up 13pc. Next week’s report will include outcomes from Rockhampton All Breeds Sale, which concludes tomorrow.

The 50-year-old Tarcombe Hereford stud south of Euroa in north-east Victoria was crowned the champion in the recent 2017 RASV Beef Week Heifer Challenge.

Judge Alec McDonald from Armidale, NSW, covered 7000 km in a nine-day marathon assessing entries of 10 heifers at 50 studs of various breeds throughout Victoria and the Riverina.

This was the first time Herefords have taken out the major award in the six year history of the competition, run in conjunction with Beef Week which cover Victoria and the Riverina.

The Hayes family’s Tarcombe stud was founded in 1967 and on March 1 will conduct its 43rd annual bull sale.

Beef Week ran from January 27 to February 4 with 220 studs from 30 breeds open to the public. Organisers estimated the 5000 bulls on display during Beef Week will sell for $30 million during the Autumn bull selling season.

The 10 finalists in the 2017 Heifer Challenge were: