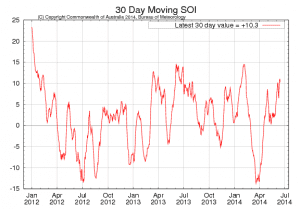 Despite a recent surge in Southern Oscillation Index (SOI) values into positive territory, the Pacific Ocean remains primed for an El Nino in the second half of 2014, the Bureau of Meteorology says.

In Australia, El Niño is generally associated with below-average rainfall over southern and eastern inland areas, and above-average daytime temperatures over southern parts of the continent.

The SOI provides an indication of the development and intensity of El Niño or La Niña events in the Pacific Ocean. Sustained negative values of the SOI below −8 often indicate El Niño episodes, while sustained positive values above +8 are typical of a La Niña episode.

In recent weeks SOI values have been positive, with the latest 30-day SOI value standing at +10.3.

These observations and some easing in the model outlooks have prompted some optimism that reports of an El Nino in late winter /early Spring may be premature.

However, the Bureau of Meteorology says that despite these indicators, most climate models still indicate an El Nino is likely Its ENSO Tracker remains at El Niño ALERT, indicating at least a 70pc chance of El Niño developing in 2014.

“The Central Pacific already looks like an El Nino,” Dr Stone said. “Atmosphere is playing catch-up so the SOI has yet to respond properly, and we tend to get a burst of wet conditions before an El Nino starts”.