The business of cattle production: Is it really a matter of ‘get big or get out?’

The size of a northern Australian cattle business can have an effect on its performance, as discussed in part-one of this series, “Better profits possible for producers that focus on the right things.”

But does that mean that a smaller producer has to ‘get big or get out’? Is bigger always better?

Scale is not the only requirement for profitability, and there are a lot of big beef businesses losing money.

Scale (number of Adult Equivalents run) affects the business in a number of ways, and if you have profitable cattle, then the more of them you have the better, up to a point.

The herd size analysis was divided into four herd size groupings. These are shown in this table, along with profit (before interest and tax) per Adult Equivalent (AE) for the average and top 25 percent performers within each herd size group.

This table shows a number of important things:

The factors separating the top performers were analysed in detail in our previous article, but in summary, when scale is excluded, the top performing producers consistently have: 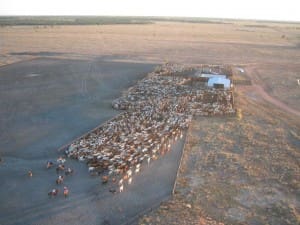 Given that the top 25pc performers in the smallest group are achieving a loss indicates that lack of scale is an insurmountable constraint for them. However for average producers in any of the other three groups wanting to increase their profits, then they would be better off improving performance at current size, rather than thinking that ‘getting bigger’ is the solution.

This goes against the usual thinking of ‘Get big, or get out.’

Even average producers in the smallest group listed above would be better off, initially, focussing on performance before and while looking to increase scale.

In fact for all beef producers looking to lift profits, the primary focus should be on improving performance before and while increasing scale. By focussing on increasing scale, without improving productivity, herd expenditure and labour efficiency, then the problem simply gets bigger, not more profitable.

Top 25pc performance is not achievable by everyone, however understanding what it is that makes those producers more profitable and focussing on those areas in your business, will improve your performance. The factors that separate them, listed above, are few and relatively straightforward.

The Northern Beef Report and its findings will be discussed in detail in an upcoming series of Business EDGE workshops being conducted by Bush Agribusiness. The Business EDGE workshop was developed by Meat & Livestock Australia to provide essential business skills for beef producers to understand and improve their business performance.

In these workshops participants will learn to:

The upcoming Business EDGE workshops will be held throughout Southern and Central Queensland in July and August. Dates and venues include: Kingaroy July 21-22; Roma July 23-24; Clermont August 11-12; Rockhampton August 14-15. An early bird discount applies to the Clermont and Rockhampton events, ending Friday.

* Ian McLean works with and analyses commercial beef businesses across Northern Australia. He is co-author of the Northern Beef Report and co-deliverer of the Business EDGE workshop for beef producers.