Live cattle shipments on track for record in 2014 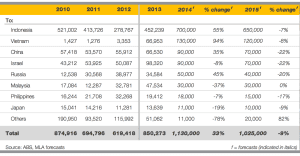 It takes about two months for official shipment data to be processed and released by the Department of Agriculture, meaning the most current data available is to the end of May 2014.

However the statistics show that exports from January to May totalled 527,000 head, 33pc higher than the corresponding period last year.

MLA says exports for the second half of the year are expected to slow, mainly through limitations on supply rather than reduced demand, but expects total cattle exports to exceed one million head this year. 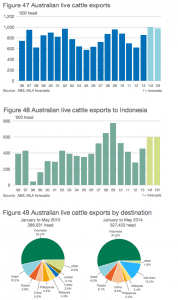 The MLA report also pointed to the important role live export markets have played in alleviating some of the supply and price pressure in southern markets over the past 18 months.

Here is MLA’s breakdown on how each major market is currently tracking:

Shipments to Indonesia have been surging in 2014, assisted by the relaxation in Indonesian import protocols for feeder and slaughter cattle, aimed at reducing beef prices.

Vietnam’s emergence as a large live cattle market has offered support to prices, and shipments are forecast to almost double year-on-year, to 130,000 head.

Shipments comprise mainly of slaughter and feeder cattle, and demand is likely to remain robust over the coming years, given the reported depletion of the national cattle herd and strong beef demand in the region.

China live cattle demand is on track to continue growing, with shipments for the year-to-date already higher year-on-year, and thus exports are tipped to reach 90,000 head in 2014, up 35pc.

A small decline is forecast for the following year, however, this is again more the result of a supply issue, rather than demand.

Israel is also anticipated to remain a sizeable live cattle export destination, with shipments likely to reach 90,000 head this year. While this is back 8pc from the previous year, in a historical context, shipments are likely to still be relatively large.

Comprising entirely of breeding cattle, exports to Russia have increased again this year, and are forecast to reach 50,000 head for the year, up 45pc.

Malaysia and the Philippines are much more price sensitive than the likes of Vietnam and Indonesia, and due to strong competition for the tightening cattle pool, exports are forecast to decline slightly to each respective market in 2014, with larger declines in 2015.