AN ECONOMIC milestone of considerable statistical interest to the beef industry was reached recently when it was determined that for the first time, half the world’s population is now classified as having reached ‘middle class’.

The rapid growth of the middle class, most of which is happening in Asia, will have significant economic and political effects, as people become more demanding of businesses and governments, says World Data Lab, the international non-profit organisation that compiled the figures.

“The milestone is important because the middle class is the engine of modern economies,” said Kristofer Hamel, World Data Lab’s chief operating officer, adding that about half of global economic demand is generated by household consumption, with half of this coming from the middle class.

The World Data Lab defines middle class as someone earning between US$11 and $110 per day, on a 2011 purchasing power parity basis – a benchmark used by many organisations and governments. It concluded earlier this month that 3.59 billion people now make up the global middle class, and forecast that the group would grow to 5.3 billion by 2030. About 90 percent of the new middle class is expected to be found in Asia. 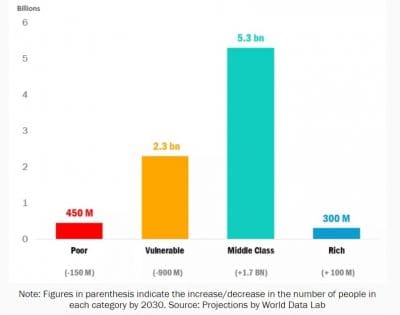 By 2030, consumers ranked in the ‘middle class’ are expected to dominate the four income classifications at 5.3 billion people (see graph). The spending power of the American middle class will remain the greatest in the world by 2030, at about $16 trillion on a 2011 PPP basis, with China ($14 trillion) and India ($12 trillion) not far behind.

The World Data Lab’s figures were calculated by analysing household income and expenditure surveys compiled by 188 national governments and aggregated by the World Bank.

“These are the people who spend the most on the things that are produced in the economy,” Mr Hamel said. “Transportation services, the wide variety of consumer products, food products and financial products are broadly catered to serve people who can afford to spend a certain amount and have a wide variety of needs.”

As has been frequently highlighted in international beef trade briefings in recent years, transition into ‘middle class,’ with it associated spending power on higher-value food items like meat protein, has significant implications for Australian beef.

While Meat & Livestock Australia uses a different definition of ‘middle class’ in its own assessment of future demand for red meat, the same principle still applies: worldwide demand for beef is growing rapidly as disposable income increases across the world.

MLA’s own analysis applies a formula using household income of US$35,000 (roughly $US$700 a week) as its benchmark for middle class classification – (effectively, a tipping-point where affordability of red meat rises).

Of 1.94 billion households assessed worldwide, data produced for MLA has determined that some 319 million households currently qualify as ‘middle class’ under this criteria (16pc of the total).

Of those, 8.9 million are in China, but the Chinese middle class figure is expected to more than double to 19.7 million households by 2021 – just three years away.

MLA’s general manager for international markets, Michael Finucan, said rising incomes were being seen all over the world, but particularly in Asia.

“Targeting those consumers as their incomes go up, when they look to improve their diets and are more likely to select red meat, is a huge opportunity for Australia,” he said.

“China is definitely moving at a faster pace, but the increasing income trend is also being seen in other markets like Indonesia, off a low base.”

MLA’s figures for Indonesia currently have households earning more than US$35,000 per annum at less than one million, but that figure is expected to double over the next five years.

“All those big numbers are impressive, but we still have to go and target the right consumers, within each market, for Australian product,” Mr Finucan said.

“But the broader opportunity is that as more people worldwide consume more beef, overall demand rises.”

In a vast country like China, MLA breaks down the population and the economy into smaller, more manageable targets. Individual cities are assessed by average GDP, to identify ‘targetable’ population centres.

Outside the major Chinese east coast ‘tier one’ cities like Shanghai, Beijing and Tianjin, MLA monitors a group of ‘tier two’ cities where economic growth is also taking place fast.

“Australia just doesn’t have enough reach to target all the possible customer cities in China, but helping exporters better understand each of those regions is important. If an exporter has a customer in Chongqing for example, that’s where we can help understand the market opportunity in that city.”

Shift from manufacturing to cuts

Beef Central asked Mr Finucan to comment on recent assessments (click here to view earlier Simon Quilty article) that more Australian cow meat is being diverted from sale as manufacturing beef into single cuts-basis (see graph below), driven mostly by China’s partial displacement of the US as a customer for lower value Australian cow beef.

He said there was talk in the market that some more ‘A’ cipher beef (typically, cull cows) was going into cuts markets, especially loin cuts. The higher proportion of cow kill in Australia due to drought had probably contributed to that trend.

“We’ve seen the kick-up in manufacturing beef into China and Asia generally, but within that, some cow beef is apparently being marketed as single-cuts,” he said.

“Some of that may be going into further manufacturing, for use in hot-pot cooking for example.”