Woolies vegetarian ‘mince’ sells out, within days of launch

WOOLWORTHS supermarkets around the country have sold out of their first consignments of an entirely new plant-based, vegetarian ‘mince’ product. The new line, branded ‘Minced’, is produced by a company called Funky Fields and retails for $8 for a 400g packet. It’s made from soy and wheat proteins (adding texture and protein), coconut (for fat), and almonds, tomato and porcini mushrooms for flavour. Its colour (see pack photo), is derived from beetroot.

The manufacturer suggests the taste is ‘close to’ minced beef, and that the product can be used in every dish where consumers thought about using meat, like lasagne, hamburgers, chilli con carne and spaghetti bolognese.

‘Minced’ is stocked in the meat section of Woolworths supermarkets, which in itself has divided customers. While some vegetarians and vegans said they would be ‘put-off’ having to venture into the meat section to purchase the product, animal protein supporters said there was no place for a vegetarian product in the meat aisle – especially one with the potential to confuse customers, through its name.

It’s one of the conundrums which is emerging, as more plant-based meat substitutes – or in some cases combined meat/vegetable-based protein formulations – come to market.

Retail competitor Coles will this week trial one of the world’s best-known beef patty substitutes, Beyond Burger, in some of its Victorian stores.

Last weekend, Beef Central went looking for the ‘Minced’ product on Woolworths’ shelves. When we couldn’t find it, we made inquiries, and were told it had sold out across Australia, within days of launch. Whether that was due to underlying consumer demand, or simply new product ‘curiosity’, only time will tell.

The use of the word ‘Minced’ on the pack has angered National Party senator Barry O’Sullivan.

Last weekend he demanded that Woolworths remove the product and re-label it, so the Federal Government did not have to ‘step in.’

“Woolworths need to pull it from the shelves today,” Senator Sullivan told the ABC.

He said he was expecting food labelling to become increasingly complex, and said the major supermarkets had a responsibility to shoppers.

“Have we gotten to a position in a nanny state where the government has to go from shelf-to-shelf, line-by-line, on every product and commodity and create legislation? No-one wants that,” he said.

“I call on Woolworths and any other retailers to deal with this themselves, don’t put us in a situation where government has to start to buy into more regulation or legislation.”

Deputy prime minister Michael McCormack also stressed the importance of correct labelling on food. “Mince is mince, mince is meat. That’s my interpretation of what mince is,” ABC reported.

He said he had been assured the label clearly stated the product was “plant or vegetable based”, but when asked by ABC whether he agreed with it being sold in the red meat section he replied, “Perhaps not.”

But Mr McCormack also said there could be other external factors behind the placement of the new item, including the space in refrigerated areas.

Woolworths would not say whether other faux meat products would be relocated to the chilled meat section.

“We know some customers are looking to eat less traditional protein in their diets,” a company spokesman said. “In response, we are pleased to range the [minced product] in our meat section to meet this demand.”

“They are piggy-backing on the back of industries that have invested hundreds of millions of dollars, to get their product identified for what it is,” he said.

The move to stock vegetarian ‘mince’ is part of a move by Woolworths to address a broader spectrum of customer needs. 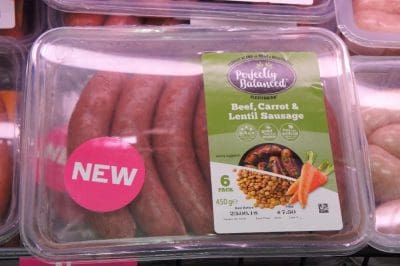 Health, wellness and dietary considerations were the underlying messages behind the product. The concept is designed to deliver ‘balance’ for those consumers who still want their traditional animal protein (albeit perhaps in smaller quantities), while also getting a ‘balance of vegetables and other products.’

The pack of six ‘flexitarian’ sausages pictured here retailed in Woolworths for $7.50, compared with a pack of premium 100pc beef/pork sausages nearby selling for the same price.