US processing giant Tyson Food Inc, the world’s largest supplier of poultry, beef and pork products, plans to spend at least 100 million yuan (A$23m) on promoting its brands in China next year. 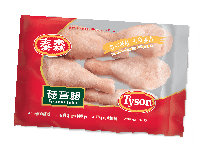 In July, Tyson launched 22 new frozen heat-and-serve value-added items that had been specially designed for the Chinese consumer.

Mr Mayer said more items are likely to be added, as the company focuses on providing products tailored to changing local tastes and demands.

The company plans to strengthen cooperation with leading Chinese e-retailers such as Yihaodian.com. It is also in line with Tyson’s global strategy of moving from a B2B (business to business) company to a B2C (business to consumer) company.

Tyson currently sells only poultry products in China, with freshness considered the most important consideration, Mr Mayer said. But demand was now growing for convenient, pre-prepared items such as those marinated, ready-to-cook, ready-to heat, or ready-to-eat, which he said Tyson viewed as its future profit growth driver in China and in which heavy investment will be made.

Its frozen-foods range is also likely to be expanded, but he ruled out investing in its own fleet of refrigerated vehicles, preferring instead to continue partnering with specialist local transportation companies.

Like so many sectors, however, online shopping will become a priority for the company, especially in large cities such as Shanghai.

“There is a whole set of Chinese consumers who are mainly, if not only, doing their shopping online. So if we are not there, we are going to miss a major segment of the population. That’s actually an ideal fit for our products,” he said.

Tyson sells most of its products in eastern and coastal areas of the country. Its products are marketed mainly to mid-to-high earners who value health-conscious, quality products and brands that are rated highly for their safety.

The company first entered China in 2001 and has since established three processing facilities. Its Nantong and Rizhao sites are complete food-processing plants, including poultry abattoirs. A third facility at Zhucheng concentrates only on processing.

According to market researcher Nielsen Co, just 38 percent of Chinese shoppers said they currently buy vegetables, meat and seafood online. But it suggested that in future, companies that could offer more transparency in their product information, more products options such as ready-to-cook and ready-to-eat items, and have strong delivery capability, will become the leaders in supplying online.