IMPORTED Australian lean manufacturing beef prices in the US continued their sharp recent decline this week, reaching A559.3c/kg. That’s back almost $1/kg in A$ terms over the past six weeks – the most dramatic fall seen since the September/October 2015 period (see graph below).

The discount on imported lean 90CL frozen beef to domestic US fresh is now as much as US25c/lb (the equivalent of A68c/kg), the largest spread seen so far this year, US market commentators reported this morning.

The main reason for the imported price slide continues to be US end-user reluctance to bid, at a time when domestic US fed cattle prices continue to deflate by the day. 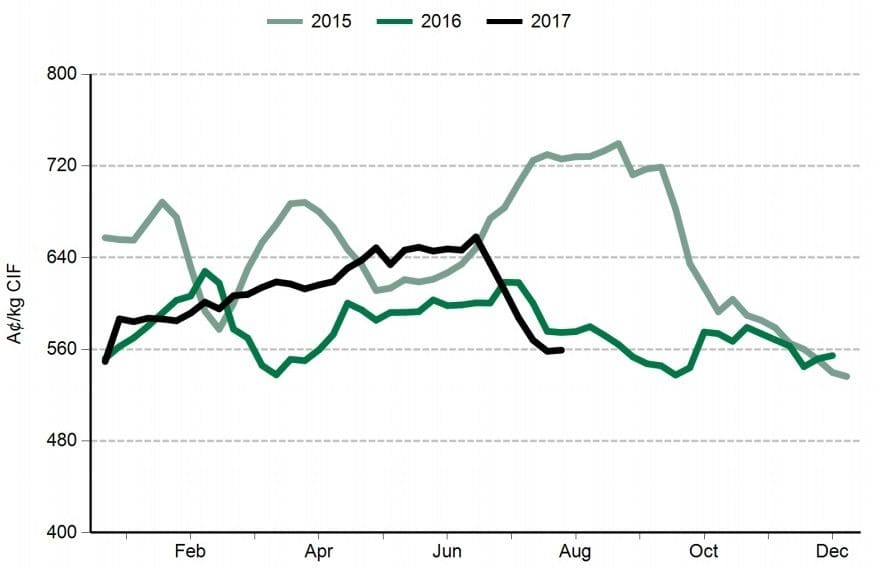 “While imported beef availability (Australia and NZ combined) has increased modestly in the last few weeks, we do not see that as the reason for the pullback in imported beef prices,” Steiner Consulting said in its latest weekly US imported beef market report.

While offerings remained quite limited, participants remain confounded by dramatic shifts in bids and offerings from one hour to the next, Steiner said.

“Low prices last week were followed by a modest price improvement, in part because the rally in US fed cattle prices at the end of last week may have stimulated some short covering,” this week’s report said.

However, US fed cattle futures had once again resumed their downtrend, influencing buyer sentiment and resulting bids.

Some market participants noted that offerings from New Zealand are particularly limited, Steiner said. This is not unusual for this time of year considering that NZ cow slaughter is now down to around 10,000 head per week compared to more than 55,000/week in mid-May.

“New Zealand exporters are indicating they are fairly well-sold through September, and so far appear unwilling to chase the market lower.”

At a time when US cattle and beef prices had trended lower, domestic lean grinding beef had for the most part bucked the trend, Steiner said. Prices on Wednesday closed at US$231/cwt on a weighted average basis, about the same as the previous week.

“Lean beef values have been trading in a fairly narrow range since May despite cow slaughter running notably above year ago levels,” Steiner said.

“We think a couple of reasons have contributed to the strength in domestic lean beef prices. First, imported beef supplies were notably lower than in previous years, which forced some large end-users to rely more on domestic supplies.

“Second, we think ground beef demand at retail was particularly strong this (northern hemisphere) spring and summer. Retail feature prices for ground beef in the US have been substantially under levels seen in 2014 to 2016.”

There was also some debate as to the state of food service demand in the US, Steiner said.

“While we do not disagree that large chains continue to struggle with foot traffic, we do not think this is indicative of the overall industry. Rather, we think there has been a significant increase in the number of new entrants, with more concepts advertising fresh ground beef as a point of difference over the incumbents.”

In April this year, the McDonald’s chain announced plans to move to ‘fresh, never frozen’ beef in its US offer, by mid-2018.

“We think this continues to favour domestic US production,” Steiner said.

“If we are right, then as imported availability increases, it will tend to drive a fairly large spread between domestic and imported beef. We expect domestic lean beef prices to decline into the northern hemisphere autumn, however. Already we have noted an increase in ground beef feature prices at retail in the US, and we expect those prices to continue to increase in the next few weeks as Labor Day (first Monday in September) features come to an end.”

“US fed steer prices remain well under year ago levels, so that should limit somewhat the supply of fat trim available in the market. Still, seasonally supplies will increase at a time when grilling demand slows down. Higher ground beef prices at retail will contribute to a slowdown in quantity demanded from that sector.”

“At this point it is possible to contemplate beef 50s dropping under US60c/lb in September, something that we did not think was possible even two weeks ago.