HIGHER demand and prices for imported beef in the US is one of the few highlights in otherwise flat global beef trade, as the Australian export beef industry heads into June.

Imported 90CL grinding beef into the US last week was quoted at A816c/kg FAS, up 125c/kg or 18 percent since the low-point in the cycle back in April, driven by supply and demand challenges in the US market caused by COVID-19. Apart from a brief spike in November/December last year, these are the highest prices ever seen in A$ currency terms (see Beef Central’s home-page graph).

In US currency terms, imported 90s last week were trading around US248c/lb CIF west coast, Beef Central was told, up from 220-225c/lb just a few weeks ago. Leaner 95CL Australian meat was trading around US270c/lb CIF, off a 235c figure a month ago.

“For most lean manufacturing beef, the rise over the past month or six weeks has been at least a dollar a kilo in Aussie currency,” a trade source said.

“It’s being driven by beef shortage caused by plant closures in the US, and the continued reliance on retail trade (where ground beef is king), as opposed to food service.”

US domestic 50CL fresh fatty trim prices have come off dramatic highs recorded just a few weeks ago of US300c/lb, driven by ‘exceptional’ Memorial Day holiday demand in late May, but now selling at around US90c/lb. Lower prices for domestic fat trim have bolstered demand for lean product, at least in the short term.

“That was always going to happen,” an export trade source told Beef Central.

“Once the US industry got a few cattle through the system through processing plants getting back to work after COVID closures, there was always going to be more fat trim coming back onto the market,” he said. 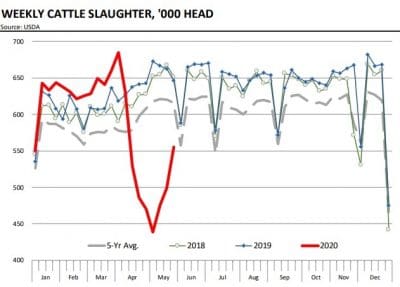 The larger US kills in the past few weeks (see graph, 2020 plot line in red) had not yet affected the lean imported market, but it could still happen, the trade source said.

“I don’t think I’d want to be ‘long’ on meat into the US, just at the moment,” he said. “While it is relatively easy to sell June/July meat, finding a US grinder customer who is prepared to go out to August could be difficult. By August/September, the expectation is that there will be a lot of cattle being killed in the US, and the whole dynamic might change,” he said.

“For this reason, I don’t know that that bullishness that’s being seen in Australian slaughter cow prices is going to remain,” he said.

Steiner Consulting’s latest weekly imported beef report has US cattle slaughter continuing to increase, but product availability is uneven, affected by shortage of labour in US fabrication lines.

Boneless product and trim continued to be high-priced relative to other cuts that require less labour, Steiner’s report said. Last week’s US cattle slaughter was still down 11pc from a year ago, but considerably improved on kills earlier in May.

The week before, overall US cattle slaughter was estimated at 555,000 head, 27pc higher than at the start of May, but still 14pc lower than last year.

All major US beef, pork and broiler slaughter plants were again operational, Steiner said, however there were also significant bottlenecks in fabrication lines due to lack of labour and the increase in separation of employees.

“We think US plants will continue to run below full capacity for many months,” it said.

“There is a significant number of cattle that have been backed up outside feedlots and the number of market ready cattle is growing every day. Improvements in the harvest rate by late June and July could start to change the calculus for supplies and pricing in the second half of the year.”

The lift in price for imported manufacturing beef into the US market is an underlying factor in a particularly strong market for slaughter cows in Australia at present.

An Australian export trade contact drew Beef Central’s attention to a graph compiled by Steiner Consulting in the US last week, which highlights relative prices for imported and domestic 90CL beef over the past 15 years. It also pinpoints five ‘big ticket’ impacts that have driven major price changes, and relativities, in lean 90CL beef in the US over that period.

“To me, the interesting feature in the five yellow boxes in the graph is that the reasons are all different,” the trade source said. “Some were supply driven, others demand driven.”

The graph also highlights a vast US50c/lb premium being paid for domestic US 90CL lean beef at the end of May, over the frozen imported equivalent.

“It’s still US300-310c/lb for domestic lean, all due to the fact that retail demand still heavily outstrips food service demand in the US, and very little imported frozen beef is used in ground beef sales in US supermarkets – it’s almost entirely fresh domestic,” he said.

As more domestic beef is processed in coming months, prices for imported manufacturing beef were only likely to trend lower, he suggested.

A ‘serious lack of demand’ for similar Australian product out of China was only helping to cap prices into the US, through reduced competition, the trade source said.

“There’s a real belly-ache in China again at the moment. Importers probably punted that the market would rise again, as recovery from COVID unfolds, but it’s been though going,” he said.

Prices in China had definitely come ‘off the boil’, partly due to very large exports out of Brazil during May.

While COVID restrictions on people movement in China were now lifting, a lot of manufacturing businesses remained shut, because big export customers in Europe, North America and elsewhere were not buying Chinese goods.

“That means many Chinese workers do not yet have that discretionary spend in their pocket, that might include a visit to a restaurant. Remember, 80 or 90pc of beef consumption in China is through food service – not bought for consumption at home.”

So is it possible that Australia could export more fresh manufacturing type beef into the US, to meet current fresh grinding beef demand for retail use?

“Unless you are putting vacuum-packaged primals into cartons, with the intention of mincing them on arrival, it’s hard to imagine how that could happen,” the trader said.

People did the sums on the same thing back in 2015, he said, (see previous graph), when the US was facing a huge beef supply shortfall after drought, and domestic beef premiums shot up. Traders even looked at air-freighting 20 tonne consignments of fresh Australian trim in ‘bins’, which would have cost 45-50c/lb in freight cost – at a time when domestic lean was worth US70c/lb more than imported.

“The big issue with that was how to e-coli lot-test bulk imported trim effectively,” the trade source said.

“But I just don’t think vac-pack primals for mincing is viable, in the current circumstances,” he said. “Even looking at fresh chilled Australian vac-packed knuckles, for use in grinding, they already have a $10/kg figure in front of them anyway. Some of our domestic pricing here in Australia is still expensive, in comparison.”

Some of the imported items that a Chinese wholesaler might have bought earlier for $8/kg or less, might now be $10/kg, due in part to cattle prices in Australia, and the fact that we are only processing 125,000 cattle a week this year, instead of 160,000.

The trade source said it was becoming increasingly hard to pick beef market trends, while there is so much volatility in the world beef market at present.

“I think it will be up and down, in an unpredictable fashion, for at least the rest of this year,” he said.

“As much as everybody around the world would now love to go out to a pub or a restaurant after two months of confinement, people are still going to continue to be careful. There’s not going to be any avalanche of trade back into food service – certainly not in the big numbers that some imagine,” he said.

“In Australia, a lot of those food service venues need 300 patrons to make them pay – not the 10 or 20 that they are currently permitted to house.”

Imported prices still firm in US

In earlier US market commentary, Steiner Consulting reported US imported beef prices trading very firm late in April, especially for product that could be delivered in the subsequent two to three weeks.

Market participants noted that there was also good interest for product delivering in July and August, largely because end-users recognised that New Zealand availability would be seasonally limited and domestic cow slaughter generally tends to be low during that time of year. However getting imported product sold for September and beyond was looking quite difficult.

Offerings from Australia were somewhat limited while offerings from NZ were seen a very light. At the same time, more meat was being offered from South America.

Mexico continued to take advantage of the spike in US domestic product, and the ability to ship fresh beef to the US due to geographic proximity.

“Some processors are struggling to contain runaway raw material price inflation, and using Mexican beef is now seen as a viable alternative despite misgivings about yield and general product quality issues,” Steiner said.

US domestic 90CL lean beef prices averaged 302.8/cwt towards the end of last month, up about $80/cwt from a year ago. In comparison, imported 90CL frozen beef for delivery in the next 45 days was still trading at a US50c discount to fresh domestic (see graph).

“The main reason is that the driver for the surge in domestic product is retail demand,” Steiner said.

Memorial Day (held last Monday) is traditionally the biggest meat consumption holiday in the US, generally kicking off the spring grilling season. Most US citizens had had to endure several weeks of stay-at-home orders due to COVID, and when combined with good spring-like weather in heavily populated areas, there had been exceptional pent-up Memorial Holiday grilling demand, Steiner said.